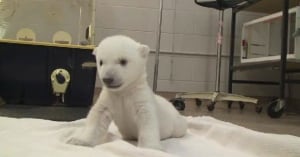 Paint the eyes black and it can pass for a panda

Then they would have to squash it and kill it like other European zoos do.

By Mike Strobel ,Toronto Sun
First posted: Monday, February 17, 2014 06:50 PM EST | Updated: Monday, February 17, 2014 07:12 PM EST
TORONTO - Cute and cuddly, my frost-bitten ***.
In a few years, that adorable bundle of white fur at the Toronto Zoo will have just one thought when it sees you: Mmmmm. Lunch.
Polar bears are the sharks of snow, the last predator you want to meet in the wild, unless you carry a bazooka. They have no fear of man. Were just another ringed seal, an appetizer for their beluga buffet.
We dont care. Were suckers for a pretty, fuzzy face.
It explains the rise of Justin Trudeau.
But few things are prettier or fuzzier than the puss on that polar pup at the zoo.
Videos of his first steps, first bath, and his introduction to snow have toppedseven million views on YouTube.
On the weekend he made his public debut. They oohed and aahed. Even CP24s Cam Woolley, a burly ex-cop, cooed, Hes soooooo cute!
The cub took in the throngs, licked his chops and drooled. His tummy growled, his black eyes glittered greedily.
I say we strangle the little bugger while we still can.
Not likely, Im afraid. A Danish zoo got death threats for offing a perfectly healthy giraffe a few days ago, just to balance its breeding program.
As I told you in 2008, the same fate befell baby reindeer at the Toronto Zoo, which did not go over well with fans of Santa Claus.
Strange priorities, eh? Far as I know, there has never been a fatal attack on humans by giraffes or reindeer.
Polar bear attacks on humans are rare only because humans are scarce in the bears usual haunts.
But theyve attacked and, in one case eaten, pedestrians in northern towns, which is not very Winnie the Pooh of them.
They stalk us, unlike the smaller grizzly which most often attacks when surprised. A polar bear can take your head clean off with one swipe of its paw.
By then, of course, they are 500 kilograms of killing machine, compared to our zoos 13-kilogram bundle of joy.
You think those viral bear cub videos are cute? Check out the 2009 video from a Berlin zoo, where polar bears attacked a delusional woman after she jumped into their pen. Zookeepers saved her from being cuddled to death.
Our zoo has a contest to name its newcomer, born Nov. 9 to Aurora and Inukshuk. The choices: Humphrey, James, Lorek, Orson, Searik or Stirling.
Im sending a write-in ballot for Jack The Ripper. It has a nice ring  and its appropriate.
(Ed. note: Strobel, David Suzuki is on the line. Says hes on his way over with a pitchfork. Sounds pissed.)
Suzuki must thank his lucky North Star for that little bear. Same for Al Gore. The polar bear is a poster child for the warmists, a tactic that backfired when Nunavut reported its bear population in 2011 was in fact, surprisingly robust.
Deputy Mayor Norm Kelly was at the zoo for Family Day. It is after all, Polar Bear Month in the arctic barrens of northeast Scarborough.
For once, the pandas are taking a back seat, though they, too, get plenty of cooing and gooing from adult humans.
You know, pandas are no teddy bears, either. They chew on bamboo and look huggable, but they are notoriously cranky and one attacked and bit a San Diego zookeeper in 2011. There have been several maulings in China.
Many people find these chunky, lumbering animals to be cute, but giant pandas can be as dangerous as any other bear, warns a Chinese website.
Same goes for polar bears, those icons of cuteness and pawns of environmental politics.
Lucky for them, they arent homely like warthogs.
Theyd be ham sandwiches, quick as a wink.
Polar bears the sharks of the snow | Toronto & GTA | News | Toronto Sun
Many visit baby polar bear on Family Day