Blackleaf
#1 Jan 12th, 2011
Just days after England trounced Australia in the final Ashes test of the series, to claim a 3-1 series win and their first Ashes triumph in Australia since 1987, both teams have now ditched their five day Test Match whites and put on their coloured kits for the start of the two-match series between the two teams in the shortest form of cricket, Twenty20, and yet another England defeat of the hapless Aussies.

Twenty20, or T20, was a format of the game invented in England only in 2003, so it's appropriate that England now dominate the format. England won the World Cup of Twenty20 cricket in the West Indies in May 2010 - beating Australia by 7 wickets in the Final - and today the World Champions sealed a record-breaking win against Australia.

The one wicket win in Adelaide was England's eighth victory in a row in T20 cricket, the first team ever to do so.

But today's match ended up being a very close affair, with fingernails no doubt being chewed by fans of both sides. Unlike Test cricket, which is "normal" cricket, which consists of two innings for each team, with unlimited overs in each innings and which can last for up to five days, Twenty20 cricket limits each team to just 20 overs in just one innings each, with the match lasting just a few hours. And it can be a great spectacle to watch, with the ball being blasted all over the ground - and sometimes out of it.

Both of the Australia and England teams today were substantially different from the ones which played each other in the recent Ashes series (only three of those who played for Australia today were in the Ashes squad), but the result was very similar - an England win.

After a minute's silence before the match to remember the victims of the Queensland floods, Australia batted first and posted a total of 157-4 from their allotted 20 overs, with all-rounder Shane Watson scoring 59 from 31 balls.

That left England needing 158 for victory and they got there, but only just.

The two teams were neck and neck - England on 157-9 - with just ONE ball left to bowl. For victory, and a world record eighth consecutive one at that, England needed to score at least one run on that final ball for victory, so the nervous tension in the stadium would have been indescribable.

But there was relief all round when England debutant Chris Woakes scored a run off that final ball to ensure yet another win for his all-conquering side. England can also thank Eoin Morgan, a master in this format of the match and who has just signed for Indian Premier League side Kolkata (Calcutta), who scored 43 from 33 balls, including five Fours and a Six.

Woakes finished on 19 not out and Shane Watson finished with bowling figures of 4-15, which weren't quite enough for his team to win.

Despite the narrowness of the win, England were much the better team and deserved the victory.

Now there is one more match to go between England and Australia in T20, which will be on Friday. Then, on Sunday, the first of seven One Day matches (the same as T20 but with 50 overs per innings) will start between the two teams. 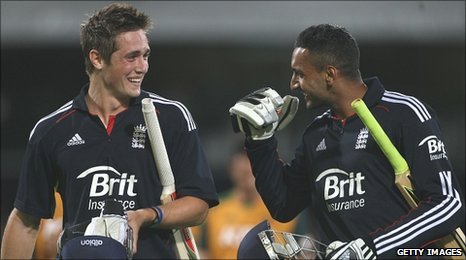 Paying respect: England players observe a minute's silence for the victims of the Queensland floods ahead of their Twenty20 match with Australia

Digging deep: supporters at the Adelaide Oval were encouraged to donate to the flood appeal by Shaun Tait and his Australia team-mates


Chris Woakes was the hero on his England debut as Paul Collingwood's side produced a record eighth win in a row in Twenty20 internationals.

In a tense finale in Adelaide, Woakes, 21, hit the winning single off the last ball, finishing unbeaten on 19.

Australia all-rounder Shane Watson hit 59 from 31 balls as they made 157-4 batting first, and so nearly won the match with superb figures of 4-15.

But the hosts were unable to defend the total, England winning with 158-9.

Until Watson's dramatic impact with the ball, England appeared to be coasting to victory.

Eoin Morgan, signed by Kolkata for the Indian Premier League earlier in the week and one of the game's best finishers in a run chase, was to the fore as England began to eat up a modest Australia total.

But with 28 runs needed from the last 29 balls, and five wickets in hand, the chase began to go horribly wrong.

Having demonstrated his customary skill at shot selection, timing and placement, Morgan (43) surprisingly drove Watson straight to David Hussey at cover, and the next ball was nicked by Michael Yardy to wicketkeeper Tim Paine.

By the end of the over, England needed 27 from the last 24 balls but only had three wickets in hand - and suddenly the game was on a knife-edge.

In to the fray: Australia batted first in near perfect conditions

Woakes, selected primarily for his bowling, promptly showed he might have the necessary tools for the big occasion. He smashed Shaun Tait for a vital six, but back came Watson to remove Tim Bresnan as Australia's revival continued.

When Brett Lee's last over went for 11, England needed only four runs from the last six balls.

Three were wanted off the last two balls, and Woakes finished the job, crashing Watson for two to the sweeper on the cover-point fence before clipping the last one over midwicket for the winning single.

In another corner of Australia, devastating floods struck Brisbane - having already wrought havoc across Queensland.

Accordingly, there was a minute's silence before play started, black armbands were worn and some players not involved in the action out in the middle spent periods of the game touring the perimeter collecting cash off spectators to aid the relief effort.

Up in the air: Michael Yardy was the pick of the England bowlers with two for 27 including that of Watson

Born in the Queensland town of Ipswich, which was swamped by floodwater on Wednesday, Watson batted beautifully.

One of only three players retained from Australia's Ashes squad, he hit Swann's first three balls for six, taking 24 runs off the over in all.

Midway through the following over, the ninth, Australia were 83-0 and looking on course for a huge score.

But having raced along playing orthodox shots, Watson backed away to try to hit Yardy through the off-side, missed and was bowled. 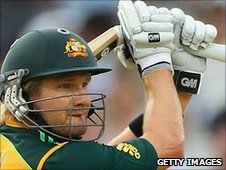 Hussey compiled a somewhat laborious 28 before he was castled by a Bresnan yorker while skipper Cameron White lofted a catch to long-on off Woakes.

Down and out: Bret Lee celebrated taking the early wicket of Steven Davies as England's chase didn't start as planned

On his way: Bell was eventually dismissed by Mitchell Johnson

The Warwickshire youngster bowled his full allocation of four overs, and overcame some early nerves to wind up with 1-34.

Aaron Finch, winning his first Australian cap, and Steve Smith attempted something destructive over the closing overs but England were disciplined. Yardy's final over went for just five and Bresnan's for four including a bye.

The final over, bowled by Shahzad, was better for the hosts. It included a dropped catch by Yardy - England were not at their electric best in the field - a reverse-hit over third man for four by Smith, and 13 runs in all.

England's opening burst of batting was a helter-skelter of fours, sixes, dropped catches - and to the relief of the Australians - completed catches.

Ian Bell, a new Twenty20 opener for an England side without four players from the team that had lifted the world title in the Caribbean in May 2010, should have gone first ball.

But Steve O'Keefe dropped a chance at square-leg off Tait and England had raced to 16-0 after seven balls before Steven Davies picked out extra-cover off the 34-year-old Lee.

Bell had another let-off, Warner spilling a tough chance, before departing when a searing drive was comfortably taken in the covers by Smith, giving Mitchell Johnson a wicket.

One that got away: England threatened to run away with the match briefly as Australia toiled in the field

Sporting rivalry: even in the heat of the battle Graeme Swann and Lee were able to share a joke after the latter rugby tackled the former

England were making fast progress. So when Kevin Pietersen, having hit O'Keefe for 10 from the spinner's first two balls, holed out to mid-off, there were no real alarm bells ringing at 63-3 in the sixth over.

Morgan began calmly, before greeting the return of Lee with a six pulled high into the crowd.

Initial support came from Collingwood but when the skipper was caught off an attempted reverse sweep, and Luke Wright fell lbw second ball, the pressure returned.

The runs flowed for Morgan, however, and England were cruising until Watson's late intervention.

As the teams regroup for Friday's second and final match, there must be concerns in the Australian camp that Watson was the only one of their players to have a major impact on proceedings.

Pacemen Lee and Tait, expected to provide a cutting edge, went for a damaging 81 runs collectively while taking just one wicket each.

Lift off: Woakes celebrates during his match-winning innings against Australia

Jul 16th, 2013
The current Ashes series is going on right now. Very exciting brand of cric, too. Sadly it is getting very little press in the USA but is has been very intense.

A lot more cricket balls are now going to be orbiting Earth as the 2014 World Twenty20 - the fifth time the World Twenty20 tournament has been held - has started in Bangladesh. It is only the second time that the world cup for the shortest form of cricket (just 20 overs for each team to bowl) has included 16 teams.

The tournament originally started off as a sort of qualifying round. Eight smaller teams competed in two groups of four, from which the top team in each group after all the games have been played advanced to the Super 10 stage to join eight big teams, making ten teams in total in the Super 10.

In the tournament proper there are two Super 10 groups - Group 1 and Group 2 - each with five teams in. These are the top eight full member teams in the ICC T20I Championship rankings as of 8 October 2012 and the two teams who joined from the qualifiers mentioned above. Those teams were the Netherlands and hosts Bangladesh..

Three new teams have also made their debut in this tournament - Nepal, Hong Kong and UAE.

England - the 2010 winners of this tournament - started their campaign in this year's World Twenty20 against New Zealand yesterday.

In Group B, two great cricketing rivals - India and Pakistan - played each other.