A snail: The French love eating them - dipped in garlic.

BEANS-MAD Deputy PM John Prescott had lunch with The Sun  and revealed he HATES foreign food.

Mr Prescott, 67, invited us to join him after we told how he piled baked beans on top of his meal at the Home Office canteen.

The podgy politician admitted he often cannot face the grub served up when on Government business abroad  and longs for simple British fare.

Two Jags said: I like plain food, I dont like fancy food. When theyve mucked around with it theyve taken away the natural taste of it. French food is too heavy for me.

We were in South Africa and they had alligator and giraffe but I just couldnt bring myself to eat them. Its difficult in China too because you dont know whats in the bloody dish.

Mr Prescott stressed the meal he was pictured eating last week was a stew, not a curry as we said.

And he revealed that his favourite evening meal at home is bacon or sausage  with beans.

Tucking into a Whitehall canteen vegetable stew  with beans on top  he went on: I like beans with everything. I eat a lot of beans. I have beans on toast at night and I make a beans toastie. But I wont have them cold.

He added: This gourmet food, lets face it, its got to a stage where its more like constructing food not cooking. I was in a restaurant the other week and to be honest I didnt like it.

I had chopped liver and mash. And the liver was in some fancy sauce and the sauce was covering the liver taste, the mash and the onions.

nope, notice he was eating a "curry"...Indian....well almost

nah I dont know anyone these days who eats what foreigners refer to as english food, nope we eat all that "foreign" rubbish, like hamburger and fries, Curries, Chinese....nope it's a bit poor to start slagging off england for it's food if no bugger there eats it anyway

Mar 17th, 2006
How about stew? Chopped liver and mash? Shepherd's pie? My English granny seems to think there is indeed something called "English food".

I'm beginning to think Canadians are in fact the smartest people in the world.

Mar 17th, 2006
most of those dishes named above are eaten in america and over the world anyway, and not refered to as "english food"

sausage and mashed potato is certainly known the world over and not just for being "English", fish and chips?...the whole of Australasia eats it.

Those dishes you named really arent cooked that much over here these days.....sure it's traditional but most people eat food from all over the world, and a lot of those recipies are dying.....as you know, I've been to america, canada etc....I honestly didnt notice much of a difference...except portion sizes......oh and America cant make a decent sausage

I was just going by what "used" to be known as "English" food, now apparently known as "worldwide" food.

So, I guess the world knows a good thing when it tastes it,,,,,,eh wot

Mar 17th, 2006
lol....let's leave off the "hows ur father" lines lol. Nope, I admit, my mum still cooks a fair bit of that, but she is old......seriously, if you look at "english" food persay, and compare it to american and canadian food, they are much more closely linked than french and german, or thai and chinese...

so what I'm saying really is that I could look at a restaurant menu in say......Grande Teton village (I know that makes me laugh too) and understand it perfectly, and know my tastebuds would not be offended by the food cus it's ll pretty much the same...if not larger

Mar 17th, 2006
I didn't think the fact that it's eaten around the world meant that it wasn't traditional English food. We all eat Chinese food, but we haven't stopped calling it that (same with Italian, or Indian, etc). Speaking of.... I'm going to order some takeout.

Mar 17th, 2006
I just made meat balls and if I can get off this forum I will be making the sauce.

Mar 17th, 2006
I think everyday is a crazy day here in england Jay....ur right, she should pay no attention.....although...anyone noticed that john Prescott in that picture looks like he's got a Hitler mustache?lol

he's an idiot anyway.....he went to the Brit Awards some years ago, and the Band "Chumbawumba"...(they sang song called tubthumpin "I get knocked down!!") decided it would be funny to poor a bucket of ice cold water over him


It was very funny actually.
And besides which, call me weird....but I really love re-fried beans with my meals....cant get em here but they taste amazin

Mar 17th, 2006
Ick. One thing I won't miss about living in California when I leave is the excessive amount of refried beans involved meals at the hospital cafeteria... 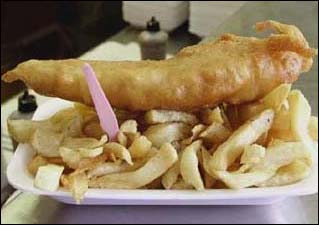 Mar 18th, 2006
by far the worst food ive ever had was in england
there simply is no contest here
ive not found many people that have disagreed
its pure crap
it tastes like crap
and it crappy for you
although -yes to each is own is always operative
my own consists of --anything except that crap
id rather eat snails nothing but snails for the rest of my
life-- i quite like them -- than one more bite of stuff
like kidney pie and -- anything --- fried in industrial grade grease they way they like it---
though in all honesty british food NOW consists of the many interesting dishes that immigrants bring to england with them such curry based food-- which is of course -- yummy

im waiting for blackleaf to tell us that the english make the best red wines ........

Mar 18th, 2006
If this was say......a french messageboard, I'd bow down and say "oh please have mercy, we are not worthy, our food is rubbish please take it away"

but.....this isnt a french messageboard, it's a canadian one, with many US posters, posters who should know better...I find it rather insulting that the country with the highest percentage of fast food companies in the world can dare suggest that ANY other country has worse food.

no, britian's old stuff is poor and fatty...but it is in no way worse than that of America cortez.....unless you count Navajo Taco's.....theyre yummy

Mar 18th, 2006
i dont know what navajo tacos are
seriously

Mar 18th, 2006
a Navajo Taco is very similar to a naan bread, although it is also topped like a pizza....as the name suggests it's made by the Dneh (Navajo) for which I am officially a "friend of the nation"....yes I know America, I know more than most Americans, your food is as varied as one would expect of a continent so large, but I preferred to "go native" in that I would try gizzerds in the south and prairie dog to the westen native lands...as well as ur typical fried chicken and mashed potateo and cattleman's breakfast in texas.

so I do know american food

Mar 18th, 2006
actually - i live in ontario
and yes the fast food places are crap pure crap
we have the greasy fast food- like mac and burger king
but theres also--those donut places- like tim hortons- fat and sugar--
i try to avoid them
still they tastes better than the blood pudding or kidney pie -- even tried some eel over there once- puke

but it is subjective- to each his own

Mar 18th, 2006
Blackleaf, like all Englishmen, has quite the good, wry sense of humour.

The English have given the world many wonderful things. Food isn't one of them.

Mar 19th, 2006
Cortez, I would generally agree with you...except...nd dont shoot me on this one....But Canada (Onntario at least) make shocking McDonald's....you go back north from the states and find McDonalds has gone to rack and ruin!!!....seriously, and Tim Horton's is owned by Wendy's (which we dont have here in the UK) anyway isnt it?.

nah I never did try a kraft dinner though

Mar 19th, 2006
I think the McDonalds here went rapidly downhill when I was working there as a student....I think it was the animal fat laden oxygen depleted atmosphere....or maybe thats where my rebellious nature began...having to stand up to the boss who told me to put the burger id just dropped on the floor back on the grill.....

Mar 19th, 2006
I went to one in spadina...if you know the one, u'll know what I'm talking about, and suffice to say there was a bigger fly population in that place than actual human customers, plus the selection is a bit small there.

I actually have a shocking McD's story.....and u will wanna take note lol, my brother worked in McDonalds for a year or so, he's allergic to nuts, to save a bit of money the store manager mixed the tom. sauce with the special spicy sauce....little did he know it contained nut extracts, the manager didnt tell anyone...my brother was taken to hospital for an anaphalictic shock, he was fine, but I hear 2 small kids wernt

McD's such a caring, sharing, reputable company whichever continent ur on