England to face Belgium, Panama and Tunisia in 2018 World Cup in Russia

Blackleaf
#1 Dec 2nd, 2017
England have been drawn with Belgium, Panama and Tunisia in Group G at next year's Fifa World Cup in Russia.

Gareth Southgate's men will begin their tournament against Tunisia on Monday, 18 June (19:00 BST) in Volgograd.

Holders Germany are in Group F with Mexico, Sweden and South Korea while five-times winners Brazil are in Group E alongside Switzerland, Costa Rica and Serbia.

The 2018 tournament takes place in 12 stadiums across Russia between 14 June and 15 July. England have been drawn with Belgium, Panama and Tunisia in Group G at next year's Fifa World Cup in Russia.

Gareth Southgate's men will begin their tournament against Tunisia on Monday, 18 June (19:00 BST) in Volgograd.

Holders Germany are in Group F with Mexico, Sweden and South Korea while five-times winners Brazil are in Group E alongside Switzerland, Costa Rica and Serbia.

The 2018 tournament takes place in 12 stadiums across Russia between 14 June and 15 July.

"We need to find out more about Tunisia and Panama as we haven't been tracking them," Southgate told BBC Radio 5 live.

"We know everything about Belgium. I think that will capture the imagination back home as they have so many players in our league. They have probably the best group of players they've ever had.

"My experience of tournaments is you need to get a result in all three matches. In the past we've assumed we'll be in certain rounds but we need to make sure we get out of our group."

Who got the hardest draw?

There is not one group that obviously stands above the rest as being the toughest.

In terms of ranking positions, Group B looks the most difficult.

European champions Portugal, ranked third in the world, have been drawn with 2010 World Cup winners Spain as well as Iran - who went unbeaten in 10 Asian qualifying matches - and Morocco, who topped an African group that featured Ivory Coast.

Group F also looks tricky for the reigning champions. Germany, who beat Argentina 1-0 in the 2014 final in Brazil, will likely face three robust examinations against Mexico, Sweden and South Korea as they try to retain the title for the first time since Brazil did so in 1962.

Resurgent Brazil - thrashed 7-1 by Germany in the 2014 semi-final in Belo Horizonte - have also been handed what looks like a quietly exacting group.

Alongside Neymar's Brazil in Group E are Switzerland, Costa Rica and Serbia while Lionel Messi and his Argentina team-mates play debutants Iceland - who reached the quarter-finals of Euro 2016 - Croatia and Nigeria.

A good group for England?

England will know all about Belgium, given the large number of their squad who play in the Premier League. Chelsea's Eden Hazard and Kevin de Bruyne of Manchester City are both enjoying superb seasons so far while Manchester United striker Romelu Lukaku recently became the country's leading all-time top scorer.

England have not lost to Belgium in their past 11 meetings - and their only defeat against them in 21 games was in 1936.

The Three Lions have met Tunisia twice before, drawing a friendly in 1990 and beating the North Africans in their opening game of the 1998 World Cup in France, a match Southgate remembers well.

"It was a fantastic day as a player to play in a brilliant occasion, our fans made an incredible atmosphere that day," the former defender said of the game in Marseille that England won 2-0.

"It's nice to be able to relive that."

Tunisia coach Nabil Maaloul says he "knows all about" England's players and when asked about whether he was happy to be in the same group as them, he said: "Yes, and we will win."

England have never met Central America country Panama and won't be familiar with their players with only three of their current squad playing in Europe.

Only eight teams have ever won the World Cup:

The Panamanians sealed their place at a first World Cup at the expense of the USA when they controversially defeated Costa Rica 2-1, with Gabriel Torres' header for their first goal not appearing to cross the line.

England's possible route to the final

In summary, reaching the Luzhniki Stadium in Moscow on 15 July is not going to be easy.

If England top their group, their path to the final could see them come up against Colombia, Brazil, France and then Germany.

If Southgate's side finish second then it could be Poland, Germany, Spain and then Brazil in the final.

A satisfactory outcome for England? - analysis

BBC Sport's chief football writer Phil McNulty: England can have no excuses if there is a repeat of the embarrassment of the 2014 World Cup in Brazil, when they failed to progress from the group phase.

Manager Gareth Southgate will understandably publicly exercise caution about the group with Belgium, Tunisia and Panama - but privately he and the Football Association will surely regard this as a highly satisfactory outcome.

There was certainly no need for FA chairman Greg Clarke to repeat the cut-throat gesture predecessor Greg Dyke delivered when England were drawn against Italy, Uruguay and Costa Rica before the last World Cup in Brazil.

Barring surprises, the final group game against Belgium in Kaliningrad is likely to decide the group winners - and this will clearly be the toughest assignment for Southgate and his team.

Belgium coach Roberto Martinez has an intimate knowledge of the Premier League from his time at Wigan Athletic and Everton, while their outstanding generation of players has a heavy top-flight influence, including two performers of undoubted world class in Manchester City's Kevin de Bruyne and Chelsea's Eden Hazard.

Tunisia, England's opponents in their opening game in Volgograd on Monday 18 June, are ranked 27th in the Fifa rankings, and will be heavy underdogs while a meeting with Panama, ranked 56th and at their first World Cup, should hold no fear.

England's immediate fate appears to hang on that meeting with Belgium but Southgate will surely be confident of qualifying from Group G.

How far will England travel during the group stage? 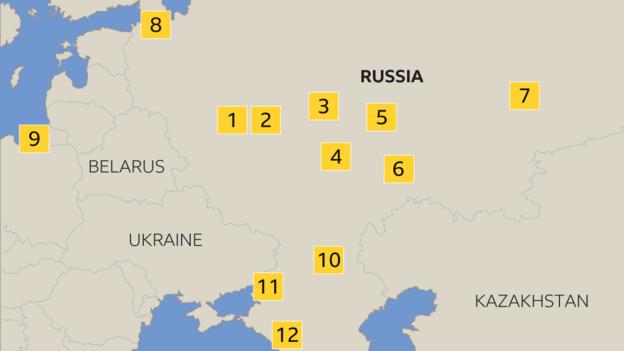 England will be based in the village of Repino, which is about 30 miles from St Petersburg (number 8, above). From there they will travel 930 miles to and from Volgograd (10) to play Tunisia at Volgograd Arena and then 600 miles to Nizhny Novgorod (3) for their game against Panama.

Finally, it's a 500-mile trip to Kaliningrad (9) for their final Group G game against Belgium.

"Travel wise, the way tournaments are now, you've got to be adaptable, but our kick-off times are decent as well," added Southgate.

In total, England's players will travel approximately 4,000 miles during the group stage, compared to the 4,400 they covered in Brazil.