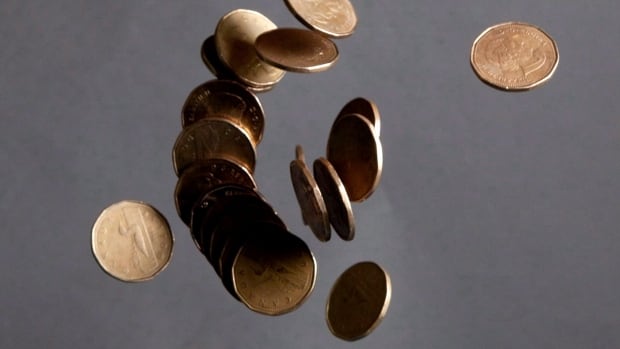 The Canadian dollar fell more than a cent against the U.S. dollar this morning  its lowest level since April 2009.

"The market is worried the Bank of Canada will hint at interest rate cuts tomorrow," says Adam Button, a currency analyst with ForexLive.com.

"It's an ongoing story of weakness in oil and strength in the U.S. economy that hasn't spilled across the border," adds Button.

Data released by Statistics Canada on Tuesday morning showed November manufacturing sales dropped 1.4 per cent, the third monthly decline in a row. That weak data is one of the last economic indicators to cross Bank of Canada governor Stephen Poloz's desk before he makes an interest rate announcement on Wednesday morning, says Button.

If the Bank of Canada hints that it might cut interest rates in the near future, the Canadian dollar could slide further.

The central bank has kept its key rate at one per cent for 34 consecutive decisions.

U.S. investment bank Morgan Stanley recently says it sees a 1 in 3 chance that the Bank of Canada will cut interest rates before year's end.

This should help the manufacturing industry in Ontario, and the oil will not rebound till 2019 they have 4 years of growth... now is Ontario up to the task to bring back the Industry.

Canada was a resource based economy.. that is all NAFTA was to the USA, a way to get our resources cheaply. Oil, Wood, Grain, WATER.

Maybe Ontario need to grow a set and vote in a Conservative Government. Pro business, cut taxes, bring in jobs.

I like the pic posted by Petros says allot. Now that Alberta's transfer payments are not going to be so high, wonder how Ontario will dig itself out. The gravy train has ended..

Re: Canadian dollar falls more than 1 cent ahead of Bank of Canada decision

Re: Canadian dollar falls more than 1 cent ahead of Bank of Canada decision

Jan 20th, 2015
Now's time to start manufacturing in Ontario.
To bad no one wants to actually work.