Facebook's Mark Zuckerberg: Does it matter that he wears a hoodie? 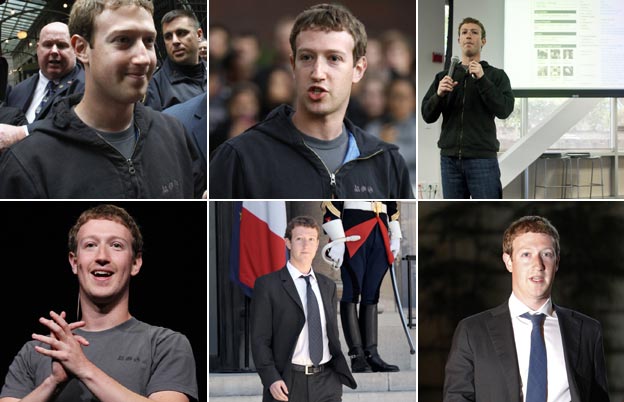 Mark Zuckerberg has been criticised for wearing a hoodie to a major business presentation. But should this be a problem?

But the code is normally formal.

These are not the rules that billionaire and Facebook founder Mark Zuckerberg subscribes to.

This week he was criticised for wearing a black hooded top to presentations to talk up Facebook's floatation, its first major sale of shares.

"Mark and his signature hoodie: He's actually showing investors he doesn't care that much; he's going to be him," analyst Michael Pachter told Bloomberg TV. "I think that's a mark of immaturity."

There have been plenty of pundits rushing to his defence. They have noted that with the floatation potentially valuing Facebook as high as $100bn (£62bn), Zuckerberg must have been concentrating on something other than dressing snappily.

So in the world of tech start-ups, can people dress however they like?

"We have had people wearing sandals," he notes.

But the key thing is the business.

"The people we back are always visionaries - really hard working, very switched on.

"The last entrepreneur I backed always wears jeans and a T-shirt to meetings. The previous one wears a suit and tie."

And the defenders of Zuckerberg have noted there is method behind his scruffy dress. His trademark black hoodie is in fact a piece of Facebook merchandise. It displays in grey the three logos for "friend requests", "messages" and "notifications".

He's also been photographed a number of times wearing a similarly logoed grey T-shirt.
And Steve Jobs is a source of inspiration.

Although he initially wore a variety of outfits including suits, a Jobs product launch came to be associated with his trademark black roll-neck jumper, blue jeans and white trainers.

Some even called the look "iconic".

It could be argued Zuckerberg is doing the same with the black hoodie.

source: BBC News - Facebook's Mark Zuckerberg: Does it matter that he wears a hoodie?

Re: Facebook's Mark Zuckerberg: Does it matter that he wears a hoodie?

May 16th, 2012
When you are that freakin; rich, you really don't care if people approve of what you wear.

Personally, I think he looks like just another rich white dude trying to look like a ghetto gangsta. Prolly listens to rap and thinks he's cool.

Re: Facebook's Mark Zuckerberg: Does it matter that he wears a hoodie?

May 16th, 2012
It might be cool if his hoody had huge arrows pointing to his crotch saying friend this.