Round-the-clock news, with a British accent.

THE British are coming again, this time not clad in red coats or sporting Beatle haircuts but bearing cameras, microphones and notebooks. 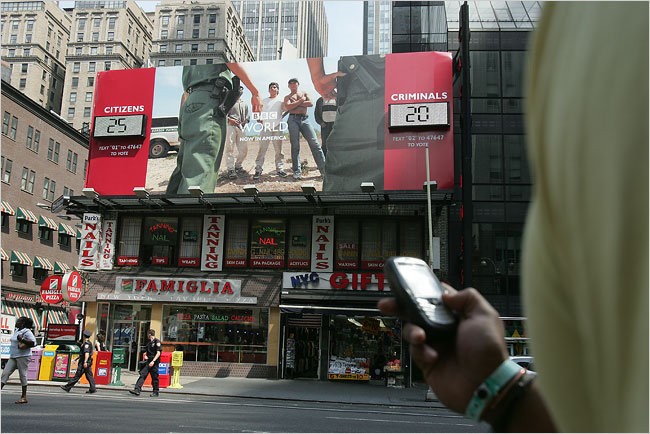 A BBC World News interactive billboard in Midtown Manhattan allows passers-by to view news photos and decide which of two different opinions they agree with.
Hiroko Masuike for The New York Times

THE British are coming again, this time not clad in red coats or sporting Beatle haircuts but bearing cameras, microphones and notebooks.

This invasion is of the journalistic kind as British news media enter the American market or seek to raise their profile here. The most recent example is the BBC World division of the British Broadcasting Corporation, which starts a campaign today to introduce Americans to a 24-hour news network on cable television that seeks to compete against CNN and Fox News Channel.

The campaign, with a budget estimated at close to $1 million, is promoting the arrival of the BBC World News network on American cable. The Cablevision Systems Corporation recently added the network to its digital lineup in metropolitan New York. The campaign, by BBDO Worldwide in New York, part of the Omnicom Group, is aimed not only at potential viewers but also at Madison Avenue, to stimulate demand for commercial time, and at other cable system operators, to persuade them to offer BBC World News to their subscribers.

"We hope very much this is the start of a series of deals," said Richard Sambrook, chief executive at BBC World in London, who is working with Discovery Communications on American distribution for BBC World News.

The United States "is the only region in the world where we're not available on a 24-hour basis," Mr. Sambrook said. Until now, he added, the only exposure Americans have had to BBC news was a daily, 30-minute program carried by local PBS stations. (The BBC America cable network that BBC World distributes to 49.4 million American homes offers only entertainment programming.)

The campaign for BBC World News, carrying themes like "News beyond your borders," portrays the network as providing coverage that is impartial and objective, enabling viewers, as several ads declare, to "see both sides of the story."

In other words, "Fair and balanced," but for real.

"In some ways the electorate is saying it's tired of partisanship in Washington, so conceptually there is an opportunity for a new voice to enter the cable news arena that is less polarizing," said Ed Keller, chief executive at the Keller Fay Group, an agency in New Brunswick, N.J., that specializes in word-of-mouth marketing. He likened BBC World News' chances of drawing viewers to the ability of a third-party candidate for president "to make waves" in 2008.

The BBC news network is the third recent example of the British media aiming at Americans. In February, The Economist, the weekly newsmagazine published by Pearson, started testing in Baltimore a campaign to increase subscription and newsstand sales in the United States.

And The Times of London, owned by the News Corporation, announced last week that it would begin publishing a daily newspaper for American readers, starting on Tuesday, with an initial print run of close to 10,000 copies to be distributed in New York and Washington.

"This has the feeling of Americans deciding they need something outside the system to get a perspective on what's going on," said Nick Shore, principal at the Way Group in New York, a strategic consulting company. "It's a global version of a second opinion."

The interest in world news delivered from someplace outside the United States could be a reaction to "the Wal-Martization of America," Mr. Shore said  that is, responding to perceptions of news that originates here as homogenized or corporatized.

Just as the "cool Britannia" trend has benefited Britain in fields like fashion and music, said Mr. Shore, who is British, "in a knowledge economy, the intellectual version is 'cool knowledge,' " learned from British sources of news and information.

The campaign for BBC World News is intended to be thought-provoking. For instance, there are several posters that at first glance seem to display world maps. On closer inspection, the countries form provocative images like a captive kneeling before a soldier and a health worker carrying dead birds.

A billboard at Broadway and 50th Street in Midtown Manhattan will ask passers-by to look at news photographs and decide which of two sharply different opinions they agree with. They can vote by cellphone text messages and the results will be tallied on digital displays on the billboard.

The idea is to convey that BBC World News "never tells you what to think," said Ari Weiss, a creative director at BBDO New York who worked on the campaign with another creative director, Jerome Marucci.

"They were willing to push the envelope," Mr. Weiss said of the BBC World executives, "and we don't always get to do that."

BBC World may also be pushing the envelope in trying to introduce a 24-hour news network to American viewers.

"It's not an easy job," said Jez Frampton, group chief executive at Interbrand in New York, a corporate identity consulting company. "It is hard to break habits" when it comes to watching news, he added, and BBC World News will be "up against some pretty powerful news brands" like CNN and Fox.

Still, "the BBC as a brand seems to be well respected in the U.S.," said Mr. Frampton, who is British, "perceived to be independent, with a deep and strong reputation for telling the truth, impartiality and straightforwardness."

And the educated, affluent viewers at whom BBC World News is aimed "may perceive some American news sources to be less than straightforward," he added.

Other elements of the campaign include promotional spots on a New York radio station, WFAN-AM, that will report on the vote tallies on the digital billboard; so-called wild postings of signs on construction sites; posters on train platforms; and a media tour offering American reporters who cover the television industry interviews with BBC anchors and reporters.

Two other agencies are working with BBDO New York on the campaign. Weber Shandwick, part of the Interpublic Group of Companies, is handling a public relations initiative and Mediaedge:cia, part of the WPP Group, is handling the media planning and buying. In its home market, BBC World uses as its creative agency a BBDO New York sibling, AMV BBDO in London.

Jul 7th, 2006
I'm all for a 24 hour BBC broadcast so long as it features EPL, rugby union, and an occasional cric match.