Mowich
Conservative
+4
#1  Top Rated Post Nov 15th, 2017
OTTAWA  The Liberals have issued a report card on their own performance, and it turns out they are absolutely brilliant at being the government. (LOL!)

The first mandate letter tracker looked at the 364 commitments the prime minister made in his missives to ministers and assessed whether they had been completed, were underway or were not being pursued.

The government did not quite give itself a gold star but the message was clear: great progress is being made and new challenges are being tackled every day with a positive attitude.

This is the first time that this kind of exercise has been made public, as part of Ottawas open by default policy.

The government claimed 66 of its commitments have been completed, 218 are underway and on track, 13 are underway with challenges, three are not being pursued and 21 are on-going commitments.

If you take that performance at face value, the government is indeed doing an outstanding job.

Fully 18 per cent of its commitments have been fulfilled and another 60 per cent are underway, with no prospect whatsoever that they might go pear shaped. Only a measly 0.8 per cent of commitments made by the prime minister have been reneged upon.

Thats if you take things at face value. If you do, dont answer messages from renowned clairvoyants promising great riches, in exchange for a small fee and your banking details.

The Liberals new website, mandate letter tracker, offers a much more rosy performance picture than the independent website Trudeau Meter, which tracks election campaign promises made (226), kept (59), in progress (72), not started (59) and broken (36).

That appears to be a much more realistic assessment of the governments achievements to date.

To give a taste of the generous nature of the governments self-appraisal, the commitment to balance the budget in 2019-20 is judged as being underway, with challenges.

Yet the accompanying text says the fiscal framework does not forecast a balanced budget in 2019-20.

The latest fiscal update sees deficits into the middle of the next decade, with balance nowhere in view, so to suggest the pledge is underway in any shape or form is a bald-faced nose-stretcher.

Early progress has been modest for schools, drinking water and housing, the text admits, despite nearly $12 billion being earmarked over two budgets.

Modest or not, the tracker suggests progress is indeed being made, with long-term drinking water advisories being reduced to 70 from 77, as of July 31.

Yet the government website lists 101 long-term drinking water advisories, as of Sept. 30, and that does not even include Saskatchewan and British Columbia (which lists 17 boil-water advisories and three do not consume advisories of its own).

There are plenty of other howlers  all is well on the infrastructure file apparently, despite departmental reports issued last week showing spending at Infrastructure Canada was 40 per cent lower than planned.

An improved Access to Information Act is underway and on track, despite the shortcomings of legislation that does little to live up to what the government promised in its election platform (namely expansion of the act to cover ministerial offices and the Prime Ministers Office).

This is not to say there is no value to the mandate letter tracker  just that it is compiled by bureaucrats imbued with an expertise in eliding inconvenient facts to put the best gloss on things.

The real take-away from the tracker is that running a federation like Canada is hard work and no amount of invoking sunny ways and Aesops Fables makes it less so.

In its quest to deliver on its promises, the Trudeau government has abandoned its original game plan of allowing ministers to be masters and mistresses of their own domains. Power is as centralized inside the Prime Ministers Office as it ever was in the Harper years  perhaps more so.

PMO loyalists have been parachuted into senior staffing roles in problem ministries; underperforming ministers have been demoted.

The government has adopted the concept of deliverology, the idea of delivering on goals and promises adopted by Tony Blairs Labour government in the U.K., and transplanted here by Sir Michael Barber, Blairs former aide, at a cabinet retreat in January 2016.

Barbers role in Canada is being performed by Matthew Mendelsohn, the head of the results and delivery unit in the Privy Council Office.

The bureaucracy has long operated on a goal-oriented structure and, as Rachel Curran, a former adviser to Stephen Harper, noted in an article in Policy Options, 95 per cent of the 100-plus commitments made in the 2011 Conservative election platform were eventually completed.

The difference is that the inner workings of government are being laid bare  or as au naturel as anyone working inside government is prepared to get.

That fewer than one in five commitments (even by the governments own inflated numbers) has been fulfilled two years into the mandate suggests a couple of things. One is that the government has been too ambitious.

Nothing is more important than the middle class, unless it is inclusiveness and diversity; or, on some days, Indigenous relations; and on others, the environment and climate change.

The success of deliverology depends on the clear identification of a limited number of priorities. Trudeau came to power with 364 commitments, compared with 100 in the Conservative 2011 election platform. Will 95 per cent of them be completed by 2019? Not at this rate.

The other is that deliverology depends on a government having the ability to deliver. In Canada, more often than not, Ottawa relies on provinces and municipalities for service delivery.

Hence the slow pace of infrastructure roll-out and the potential problems with legalizing pot.

This argument is undermined somewhat by the fact that in two of the major problem areas  veterans and Indigenous affairs  the federal government does have sole jurisdiction.

But it may be that the target-oriented nature of deliverology is well-suited to these files, and it is simply the bureaucratic logjam created by throwing billions and billions and billions of dollars at those problems that has produced such unsatisfactory results. Building more houses on reserves and increasing the participation rates at First Nation schools may end up being problems that deliverology helps ease.

Trudeau had best hope so because a more objective measure of his government at mid-point is that it is underwater  below C level.

Is this the real definition of fake News ?

Nov 15th, 2017
Every government ever has said the same thing. Nothing new. Stevie Harpo was always bragging how great the Harpo government was.

Every government ever has said the same thing. Nothing new. Stevie Harpo was always bragging how great the Harpo government was.

The Harper government was great. Now the Liberals are spending money and time destroying many of Harper's accomplishments. "Fixing" something that ain't broke is not progres. It will probably take the next government another ten years to fix all the damage TrudOWE managed to inflict in just two years.

Its called Presto, but has been anything but.

Back in 2002, Ontarios former Conservative government began research on a regional fare card for public transit across the Greater Toronto Area.

Other transit systems around the world had already begun abandoning fare tokens and tickets in favour of digital pay systems that could be used on local and regional buses, subways and trains but Ontario would be slow to get on board.

The Conservatives planned to use an off-the-shelf product that could be purchased for an estimated $140 million but didnt get the chance.

A year later, Dalton McGuinty was in power and his government continued the work. However, while the Tories wanted a cheap and cheerful product, the Liberals decided to build a propriety system from scratch.

In 2006, the Liberal premies transportation ministry signed a 10-year, fixed-price $250 million contract with Accenture  a U.S.-based global technology services firm that was tasked to deliver a completed working system by 2016.

That same year, the Liberals created Metrolinx  a regional transportation agency that would be tasked with implementing and managing Presto.

The Liberals also made gas-tax funding contingent upon municipalities including adopting and using Presto.

You already know how this story will end.

By 2010, the City of Toronto was threatening to pull out of Presto. The program ran into a series of delays and setbacks.

McCarter estimated the cost of Presto could hit $700 million.

In the years that followed, the system got built and fare gates were installed in GO and subway stations, on public transit vehicles. But its been plagued with reliability issues and ongoing delays  the most recent this week when the TTC suspended Presto fare-gate installation over mechanical and software issues.

This in microcosm is the key to whats wrong with the Ontario Liberal government, a government that has tripled public spending and doubled debt without a commiserate increase in public service.

Presto was a marketing slogan, like the Fairness slogan Kathleen Wynne tosses around now.

The Liberals could have contemplated a cheaper, tried-and-true alternative, but handed the project over and failed to oversee implementation. Its become a pattern of mismanagement.

Health care, hydro and other public programs are in crisis precisely because Ontario has a marketing team, not a government in power that takes the provision of public services seriously.


But come June 7, Presto! They could be gone.

Apr 18th, 2018
OTTAWA  The Liberals are torn. Theyd like to live up to their own lofty rhetoric about building a shining beacon on Parliament Hill.

But theyd prefer not to be constrained in any way by the inconvenient logistics of Parliament.

The governments latest attempt to circumvent the scrutiny of the House of Commons is a streamlining of the budgetary process that would limit Parliament to vote just once on all the spending measures in the recent budget.

Its the budgetary equivalent of the kind of omnibus bill the Liberals said they would never introduce.

The vote would give Treasury Board president Scott Brison unprecedented discretion over $7 billion, on the promise that the House will be informed about all the messy details at a later date.


******
It is the most important job of any MP to make sure taxpayers are getting value for money from their government. The governments budget implementation vote will make that more difficult.

I predict another ignominious government climb-down in the coming weeks.

Apr 24th, 2018
PBO: Liberal Deficits Over Next 2 Years To Be Billions Bigger Than Anticipated

The analysis conflicts with the feds' projections from February budget. 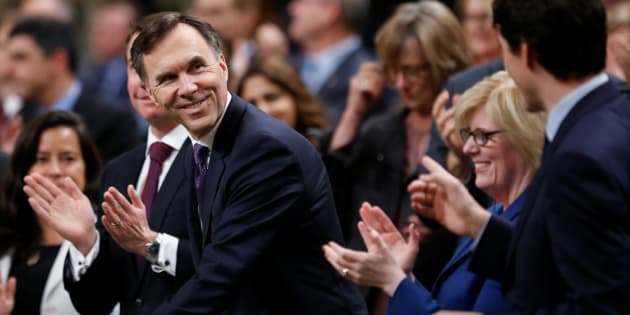 PBO: Liberal Deficits Over Next 2 Years To Be Billions Bigger Than Anticipated

The analysis conflicts with the feds' projections from February budget.