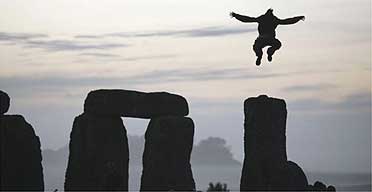 A man jumps in the air from the top of one of the stones as the sun rises over Stonehenge. Photograph: Peter Macdiarmid/Getty


An estimated 21,000 people today gathered at Stonehenge to watch the sun rise above the ancient monument on the longest day of the year.

At 4.58am, the earliest time at which the sun makes the passage above that part of Salisbury Plain, cheers rang out as it rose over the monument's "heel" stone.

A few high wisps of cloud, together with low-lying mist, added to the atmosphere of dawn on the longest day of the year.


The all-night festivities at the ancient stone circle, in Wiltshire, passed relatively peacefully. Wiltshire police said six arrests had been made at sunrise, four of them for drink-related offences, although the figure was expected to rise as revellers headed home.

The English Heritage chief executive, Dr Simon Thurley, said: "There has been no trouble. People seem to have enjoyed themselves."

Before dawn, King Arthur Pendragon, 51, the head battle chieftain of the British Council of Druids, led a troop of warriors - all anthropology students from the University of East London - in a dance honouring mother nature, whose effigy was held aloft and illuminated by fiery torches.

King Arthur said the summer solstice signified the mythical oak king, who rules the first half of the year, being beaten in battle by the holly king, the ruler of the second half of the year.

"The solstice is about the death and regeneration of nature," the king, dressed in a white gown and wearing his sword, said. "Celebrating the summer solstice is part of our religion. We celebrate the shortest day, the longest day and the two equal days."

The bearded chieftain - who stood as an independent candidate for Winchester in the recent general election - fought for Stonehenge to be reopened to the public following the infamous Battle of Beanfield in 1985.

Revellers clashed with police, resulting in the monument becoming an exclusion zone. King Arthur was repeatedly arrested for ignoring the ban.

English Heritage has opened the site to the public free of charge for the summer solstice since 2000. "It's great the way people can come here now. I'm all for it," King Arthur said.

After greeting at the rising sun, the mix of bleary-eyed people began making their way home from the site, which has drawn visitors for 5,000 years. Revellers were expected to have left by 1pm.

RE: 21,000 gather at Stonehenge to celebrate summer solstice

1. The summer solstice is one of those things that have been around for a very long time. It's all to do with the Earth's yearly jaunt around the sun and the fact that the planet presents itself to our local star at an angle of 23.5 degrees, so at the summer solstice the north pole is at its closest to the sun.

2. Cue a glut of glorious daylight and a sudden awareness that it is all downhill from here - next stop is the winter solstice when darkness prevails. Unless, of course, you live in the southern hemisphere, in which case you'll be celebrating the winter solstice today.


3. The word solstice has its origins in the Latin word solstitium, meaning "the sun stands still". Not to be confused with the 1950s cult SF film The Day the Earth Stood Still, which presents altogether different issues.

4. Down on the farm the summer solstice traditionally represents the chance to wallow in the expectation of bountiful harvests. The planet takes time to warm up, which is why we traditionally consider the height of summer to be some time during July or August - and why the shock of autumn is all the greater.

5. In Celtic cultures, the June solstice represented midsummer, the midpoint between the start of the Gaelic summer on May 1 and the onset of autumn on August 1. Weird - which might explain why William Shakespeare's play A Midsummer Night's Dream is set at this time of year.

6. In Britain, Stonehenge is the main focal point for solstice celebrations. The henge (stone circle) of henges is a magnet for people of Pagan faiths and those seeking a true solstice dawn experience.

7. The ancient stones are thought to have been erected between 3000BC and 1600 BC, and the circle has its main axis in perfect alignment with the summer solstice sunrise. Archaeologists have revealed research showing that seven skeletons discovered at the site last year are almost certainly those of a family group who helped to erect Stonehenge.

8. Violence has erupted at solstice celebrations in Stonehenge in the past, most notably in 1999 when English Heritage first opened up the site for free access. Since then the event has been managed much more successfully while the Truth and Reconciliation Committee for Stonehenge has been set up to help ease these tensions. Perhaps it's best not to tell the Stonehenge regulars that new research suggests they may be gathering at the ancient site on the wrong day.

9. European marriage traditions owe much to the period around the summer solstice. Ancient cultures once believed that the sexual union of the gods took place in May. So marriages would be held over until the first (or only) full moon in June, also the best time to harvest the honey used in making celebratory mead. That is why so many people today get married in June and then go away on honeymoon.

10. And if you didn't make it to Stonehenge this morning, have your own personal solstice by brewing up some solstice mead, baking dandelion muffins and, when it finally gets dark, putting on a DVD of Wicker Man. You'll never know the difference.

Kind of brings out the pagan in you eh Pea?

Jun 21st, 2005
Dam! that bigH gets the best adventures...I wonder if that is him leaping off that rock mom

Well he must fill us in when he returns....course I will get all the details first...seeing as bigh and lil pea have a mutual admiration club :P

Jun 21st, 2005
I was under the impression that people weren't actually allowed "near" the stones anymore......

Jun 21st, 2005
I don't know twinks, but bigh will be back on thursday, I am sure he will fill us in on everything.