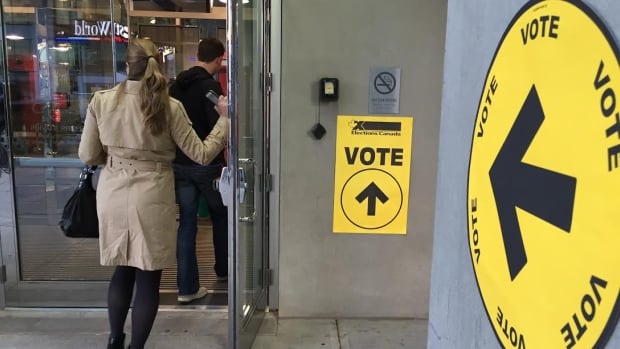 The price tag for the 2015 federal election has come in at $443 million, up 53 per cent from the $290 million the 2011 election cost taxpayers, according to the Elections Canada preliminary estimate.

Part of the reason for the increased cost was the unusually long campaign period of 78 days, almost double the length of the previous election. There were also 30 new ridings in play.

Broken down, that cost is about $17 per voter, compared with $12 in the previous election.

The independent agency doesn't yet know how many millions it will have to pay out to political parties and their candidates, who are eligible for rebates of up to 50 per cent and 60 per cent respectively for their campaign expenses.

Elections Canada estimates that rebates topped $60 million after the 2011 election  a figure that's bound to be higher for the 2015 vote, since the unusually long campaign meant spending limits for parties and candidates were effectively doubled.

The preliminary cost estimate is contained in an Elections Canada report on the Oct. 19 election, tabled today in Parliament.

Elections Canada recorded a number of serious problems at the polls and is currently investigating the incidents that will be detailed in a later report. Some of the complaints included:

For the first time, Elections Canada opened satellite offices at university, college and CEGEP campuses as well as friendship centres and YMCAs. The 71-location pilot program was launched to make it easier for students, First Nations and young people to vote.

Another 22,000 Canadians voted in hospitals, including 764 in acute care facilities

A number of trends emerged in this election. For example, the percentage of prisoners who voted in the election was greater than the proportion of Canadian Armed Forces members who voted .

The actual numbers of prisoners who cast ballots in 2015 was 22,362, while the number of Canadian Forces members who voted was 29,247.

Among Canadians living abroad who were eligible to vote, 70.5 per cent cast ballots, up from 59 per cent in the last election.

There was a huge spike in the number of voters who cast ballots in advance polls.

Nearly 21 per cent of Canadians voted before election day  about 3.7 million voters  and that marks an increase of 74 per cent from 2011, when 2.1 million people voted in advance.


He doesn't have a choice.

I voted as often as I could.

I voted as often as I could.


doesn't surprise me at all, and the Cons still lost.

Well, one thing for sure we got a hell of a lot better bang for our buck in the 2011 election!


I guess it depends on which side of the fence you sit. The same number that voted for the cons last time, voted for the Libs this time.

Feb 8th, 2016
It's not surprising that the cost of the election was so high, considering the obscene length of the campaign period, as ordered by the Right Hon. Stephen Harper P.C., M.P. Fortunately for the social and economic future of the country, his gamble backfired, and the campaign period gave the electorate enough time to convince themselves of a "change of direction."

The former prime minister decided to provide advice prescribing one of the longest campaign periods in Canadian history, and there was a corresponding price tag increase for the Canadian taxpayer. The Conservatives abused the Canadian electoral system, thinking that Trudeau and the Liberals would implode, and the bill that we are now receiving is essentially the fee for their folly.
Last edited by FiveParadox; Feb 8th, 2016 at 01:56 AM..

Foley
relating to or concerned with the addition of recorded sound effects after the shooting of a film.
"the aural details that foley artists duplicate"

Oh, and university boy, it's folly, not foley.

Foley
relating to or concerned with the addition of recorded sound effects after the shooting of a film.
"the aural details that foley artists duplicate"

I'm guessing that it is a typo. And who cares anyway? You understood what he meant. If we start correcting every lapse in grammar and spelling in these forums they will be twice as long.

No, the tax payers will provide..

Feb 9th, 2016
When you pile up millions more than anyone else in the party coffers
and then add nearly double the length of the election to spend more
than everyone else while you are so unpopular everyone is waiting to
rid themselves of your present yes it cost way more. The outcome was
well worth the cost and trouble though no complaints from me

Feb 9th, 2016
There was no real need for a lot of the extra costs. Taxpayers should not have to finance political parties for a start. Nor was there a need for all the extra polling stations. University students can vote the same way as anyone else at either an advanced poll or on election day. There is a system already in place to cast out of riding ballots. Prisoners should not be allowed to vote period. That is a right that should be suspended when you get incarcerated.

There was no real need for a lot of the extra costs. Taxpayers should not have to finance political parties for a start.

I do not agree here. If we are going to proceed with political parties continuing to have the current role and influence that they have in the "election machine," then we need to have ways to compensate for the ability of the major parties to crush any fledgeling competitors through sheer financing. The per-vote subsidy was one way of doing this (which is why the Conservatives abolished it), and the reimbursement of a percentage of electoral expenses is another. Ensuring at least a fighting chance for new, innovative, and non-mainstream ideas is a central pillar of democracy.

Nor was there a need for all the extra polling stations. University students can vote the same way as anyone else at either an advanced poll or on election day. There is a system already in place to cast out of riding ballots.

Again, I do not agree. Students face some unique barriers to the voting process that other citizens might not face. They are less likely to have the same level of identifying documentation for the purpose of casting an out-of-riding ballot, and their academic commitments do not come with the same guaranteed time release to vote that employment provides.

Prisoners should not be allowed to vote period. That is a right that should be suspended when you get incarcerated.

Yes, they should. Otherwise it wouldn't be called a "right."

Feb 10th, 2016
Put a ceiling on how much each party can get. Any corporate donations are taken off what the taxpayers are 'donating' so the ceiling is the same but 'special interests' still get a finger in the pie.


I want my money back.