Blackleaf
#1 May 12th, 2006
The economy of the Eurozone (the countries of the EU that have the Euro currency) has disappointing economic growth AGAIN this year. Even the Netherlands and Finland and struggling which, despite being in the Eurozone, usually have high growth.

PARIS, France (Reuters) -- Europe's economy missed the boost it was supposed to get from Germany in the first quarter of this year, raising questions about a widely predicted acceleration in growth and the case for rapid rises in euro zone interest rates.

After recent news of a solid 0.8 percent increase in Belgian growth in the three months to end-March, Germany led a string of reports from the euro zone on Tuesday with a less impressive 0.4 percent GDP rise against a forecast of 0.6 percent, all the less so after a flat finish to 2005.

The Dutch economy also disappointed, with an official report saying growth there slowed to 0.2 percent in the first quarter, and that after a downward revision in growth for the last three months of 2005, to 0.6 percent from 0.8 percent.

Finland reported a slide in quarter-on-quarter growth too, to 0.4 percent from 0.9 in the final quarter of 2005, and Austria's expansion rate eased to 0.5 from 0.7 percent.

Prior to today's data, economists had been forecasting the euro zone to show a 0.6 percent quarter-on-quarter rise.

Economists, convinced for some time now that the German economy is staging a comeback since an unexpected lull at the end of last year, blamed the somewhat disappointing report from Germany on harsh winter weather.

Just bad weather?
Matthias Rubisch, an economist at Commerzbank, said the bad weather had hit the building sector above all but he expected Europe's largest economy to continue to rebound, if not on the euphoric scale suggested by recent business confidence surveys.

"The German economy remains on a course of moderate expansion despite record levels of business confidence," he said.

Silvia Pepino, economist at J.P. Morgan, said the bad weather in the early months of this year might have had a negative impact beyond Germany as well.

The European Commission raised its forecasts this week for euro zone GDP after several upbeat surveys on business activity and morale that have nonetheless fueled debate about a "reality gap" between opinion polls and "hard data" such as GDP reports.

The Commission raised its forecast for growth this year to 2.1 percent from a previous prediction of 1.9 percent for the 12-nation euro zone after 1.3 percent in 2005.

It also expected inflation staying at 2.2 percent, above the 2-percent benchmark the European Central Bank uses as a measure of medium-term price stability, with high oil and commodity prices partly to blame.

The inflation-fighting ECB is widely believed to have held off on an expected third rise in interest rates in the hope that the first-quarter GDP readings would erase any lingering doubt about the solidity of economic recovery in the region.

Financial markets are betting on a rise in its key rate at its next meeting in June on the basis that the central bank is itching to make borrowing a bit dearer to cool any inflationary pressures.

The ECB started raising rates in December and has so far moved twice, lifting its key rate to 2.5 percent from 2.0, compared to a benchmark rate of 5 percent in the United States after the latest rise there overnight.

The survey suggests UK consumer confidence is improving
UK economic growth will accelerate in the second half of 2006, according to a survey of business confidence.
Economic growth will rise to 3.4% in both the third and four quarters of 2006, compared with 2.4% last year, said accountants BDO Stoy Hayward.

Its latest Business Trends Report also showed that firms expect inflation to come in at 2.2% in the second half of 2006, above the Treasury's 2% target.

As a result, it predicts interest rates will not be lowered this year.

UK rates are currently at 4.5%, where they have been for eight months in a row.

BDO Stoy Hayward said the main factors contributing to higher business confidence were a rebound in consumer spending, an economic recovery in continental Europe, and a rapidly rising stock market.

"Short-term [business] confidence has risen to its highest level in over two years, and it is good to see that medium-term confidence has stabilised at its highest point since last April," said BDO Stoy Hayward partner Peter Hemington.

"Businesses are responding by planning for better times ahead - stocks are being built up and capital expenditure looks set to rise in the coming months."

The survey said that the service sector was leading the ongoing economic growth, but that manufacturing was also seeing a "respectable" increase in output.
------------------- 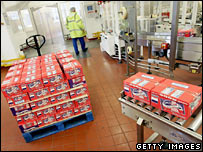 Output and orders are up

The UK manufacturing sector enjoyed a strong upturn in fortunes during April, according to a survey of managers.

The Chartered Institute of Purchasing and Supply (CIPS) said its Purchasing Managers' Index rose to 54.1 in April, the highest level for 17 months.

Growth in manufacturing output hit its highest level since November 2004, the survey found, and new orders also grew thanks to a pick-up in domestic demand.

Improved demand from the US, Asia and Europe helped to lift export orders.

"This is a very encouraging survey for UK industry and adds weight to the view that the long-awaited rebalancing in economic growth is starting to happen," said Andrew McLaughlin, group chief economist at RBS which produced the report with CIPS.

The CIPS figures are the latest indication that the fortunes of the manufacturing sector may have improved in recent months.

Last week, figures from the Office for National Statistics (ONS) showed that the UK's economy grew by 0.6% in the first three months of the year, helped by stronger-than-expected growth in the manufacturing sector of 0.7%.

Analysts said the strength of the CIPS report reduced the chance of any cut in UK interest rates in the short term.

The Bank of England's Monetary Policy Committee meets later this week to decide if a change from the current rate of 4.5% is needed.

"The UK manufacturing purchasing managers' index has further dampened the prospect of rate cuts in the near-term," said James Knightley, an economist at ING Financial Markets.

"The (CIPS) report will also aid the case for those expecting the Bank of England to raise interest rates again.

"But with inflation pressures remaining subdued and consumer weakness continuing, we doubt that the BoE will be forced into changing interest rates anytime soon."

The CIPS manufacturing output index rose to 56.5 in April, from 51.5 in March.

The pick-up in output and orders also led to a slight rise in employment levels in the sector, CIPS said.

Companies continued to see a rise in input costs, with oil and energy price rises the main factors.

However, CIPS said that companies were continuing to absorb most of the cost increases rather than pass them on to customers.