Blackleaf
#1 Dec 26th, 2019
Ireland's premier Leo Varadkar has said he will not dismiss the idea of building a bridge between Northern Ireland and Scotland, but insisted the UK must pay for it.

UK Prime Minister Boris Johnson and the Democratic Unionist Party have spoken in favour of the idea. 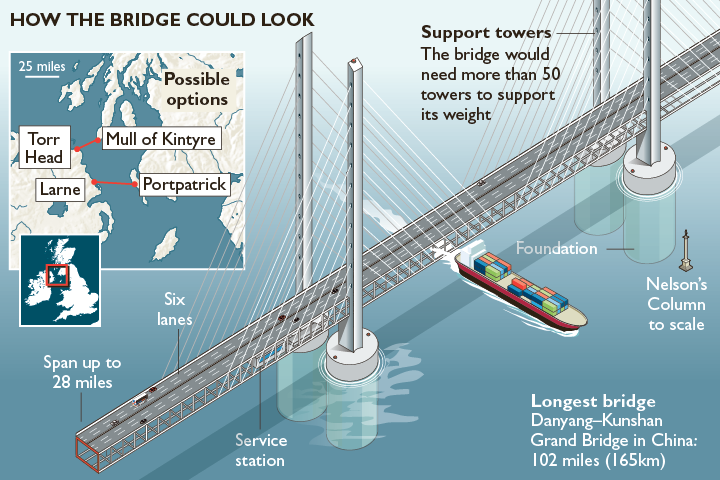 There are two proposed routes for the bridge

Ireland's premier Leo Varadkar has said he will not dismiss the idea of building a bridge between Northern Ireland and Scotland, but insisted the UK must pay for it.

UK Prime Minister Boris Johnson and the Democratic Unionist Party have spoken in favour of the idea.

Last week Mr Johnson described it as a "very interesting idea" and added: "Watch this space."

Mr Varadkar revealed he told the UK premier it was "worth examining".

But the Taoiseach said he had also told Mr Johnson he would expect the UK to pay for it.

Mr Varadkar added: "At which point he suggested, 'no, no, the EU is going to pay for it'.

"So that's definitely not going to happen, because neither Northern Ireland or Scotland are going to be in the EU. But it was kind of half serious, half joking in a way.

"But all messing aside, I do think at the very least a high-level engineering assessment should be done as to whether it is a viable proposal." 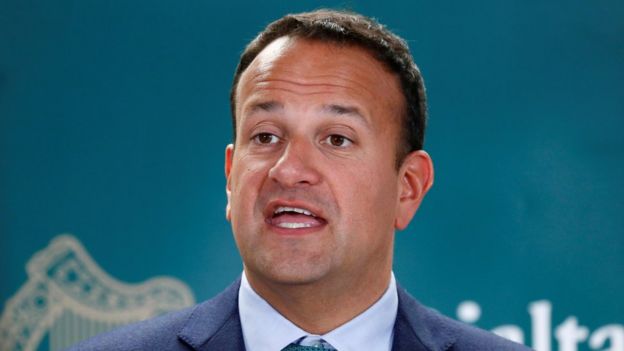 
Architect Prof Alan Dunlop previously said the "Celtic bridge" would cost about £15bn, a fraction of the estimate of £120bn for an English Channel bridge.

Other parties have been less enthusiastic about the idea, with Ulster Unionist Party leader Steve Aiken saying investment in Northern Ireland's existing infrastructure was a greater priority.

Mr Varadkar said: "I know people dismiss these things out of hand, but they used to dismiss the Channel Tunnel as well - the idea of building a tunnel between France and Britain - and I know what I see when I see a bridge tunnel between Denmark and Sweden, when you fly over New Orleans and you see 110 miles of bridge, it's extraordinary.

"I think we need to at least check out if this is viable in engineering terms and how much money it would cost to do."

However, Mr Varadkar also said his focus was on improving existing infrastructure, such as a high-speed rail link connecting Dublin, Belfast and Cork.

Dec 26th, 2019
Like that will happen. Scotland likes to claim they are independent let them build it.

Dec 26th, 2019
The bridge could very well be built. Both the UK government and the Scottish Government support it, saying it will be a big boost to the Scottish and Northern Irish economies.

Boris Johnson also wants a bridge between England and France.

It'd be cool if all the bridges get built.

Feb 9th, 2020
Boris Johnson revives £20billion plan for bridge between Scotland and Northern Ireland that would mirror the link between Sweden and Denmark 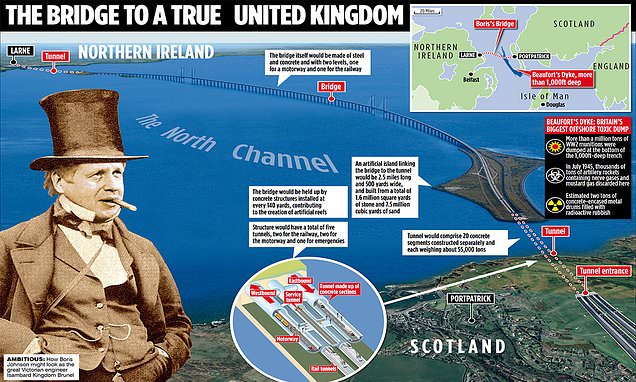 The Prime Minister (left, mocked up in a top hat), who is keen to sanction a series of grand infrastructure projects as a legacy of his rule, is about to receive the results of a feasibility study into the construction of a combined bridge and tunnel connection at the narrowest, 20-mile gap between Northern Ireland and the British mainland. One version of the plan would be modelled on the Oresund Bridge, which runs for five miles from the Swedish coast near Malmo to an artificial island in the middle of the Oresund Strait. (Pictured: How the bridge could look).

Feb 9th, 2020
Seems like a huge waste of money. Why not a tunnel? It would be storm and terrorist resistant and not a hazard to navigation.

Seems like a huge waste of money. Why not a tunnel? It would be storm and terrorist resistant and not a hazard to navigation.

A tunnel is also being proposed by some companies and organisations right now.

The Institution of Civil Engineers (ICE) has produced an imaginative plan to physically link Northern Ireland to the rest of the UK.

But plans don't include a bridge. Instead, they favour the construction of a tunnel under the Irish Sea.

They say their proposal would be better than a bridge, as a rail tunnel would not be at the mercy of bad weather, and would avoid the problems in spanning Beaufort Dyke, a deep sea trench in the North Channel containing a million tonnes of dumped wartime munitions.

The plan is part of a broader list of tunnel projects put forward by the society.

They include a tunnel from Hampshire to the Isle of Wight, another under the Bristol Channel between the West Country and Wales, and a new tunnel under the Thames.

A tunnel between Scotland and Ireland was first proposed as early as 1890. Of course, it never happened.