Blackleaf
#1 Aug 9th, 2013
The UK's population grew almost half a million between the middle of 2011 and the middle of 2012, which means its popualtion is growing faster than any country in Europe.


The UK's population is now almost 64 million. Its population growth is expected to continue to outstrip that of its nearest European rivals France and Germany over the coming decades - with Britain on course to overtake Germany as Europe's largest country (and probably its largest economy) by 2050.


London, which is already the EU's largest city and the ninth largest in the world, is also experiencing huge growth.


Immigration and recession boost UK population by 420,000... the fastest growth in Europe 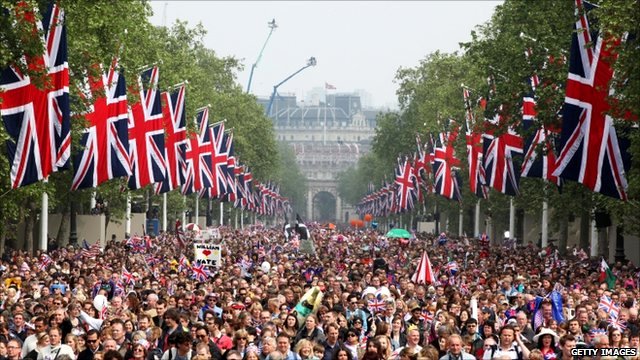 
The population in Britain is rising more steeply than anywhere else in Europe, according to official estimates yesterday.


The figure, which covers the 12 months to the middle of 2012 is more than the population increases in Germany, Belgium, Holland and Sweden combined. 
The Office for National Statistics says around four in ten of the additional people are immigrants. Six out of ten are the result of rising birth rates, which brought a 40-year high in the number of babies born last year – 254,400 more births than deaths.


But a major cause of the baby boom is immigration. More than a quarter of all newborns have mothers who were born abroad.


The rate of population increase last year held steady despite Coalition attempts to reduce immigration, the ONS said. Its report said the 419,900 increase in population for 2011-12 was ‘about average’ for the past decade.


Annual population growth first hit the 400,000 mark in 2005, following the opening of Britain’s borders and labour market to Poles and other Eastern Europeans in 2004. The increase in the number of people living in the UK was higher than any other country in the European Union - more than the population increases in Germany, Belgium, Holland and Sweden combined.


If the increasing numbers continue unchecked, the population will hit the landmark 70million point in the early months of 2027.


The figure is a level at which many commentators believe housing, transport, utilities, education and the NHS will be severely stretched.


Yesterday’s estimates mean that by the middle of 2012 Home Secretary Theresa May’s efforts to reduce net immigration – the amount by which migrants push up the population each year – to 1990s levels had yet to have an impact on the total number of people in the country. The figure is currently 165,000. Divide: London and the south saw bigger increases in population between mid-2011 and mid-2012

UKIP leader Nigel Farage said: ‘These figures show the continuing failure of the Government to get a grip on immigration into this country. The results of this increase in population can be felt in communities up and down the country as public services struggle to cope with the increase in demand.’


He added: ‘At the same time we face cuts to frontline services and send billions of pounds abroad in foreign aid. And this is before Romanian and Bulgarian citizens have full access to the UK come January next year.’


The British population increase was almost a third higher than the rise in the next fastest-growing EU country, France. During the same period the French population rose by just over 319,000.


But Britain’s population is expected to outstrip those of France and Germany over the coming decades, becoming the most populous country in Europe by 2050.


Numbers here have gone up by more than half a million since the last national census, taken in March 2011. Since 2001 the population increase has been 4.6 million, the ONS said.


London saw the greatest rise in 2011-12, at more than 100,000. The rapid change came despite 51,000 people leaving the capital, mainly for homes in the suburban towns of southern and eastern England.


Paul Vickers of the ONS said: ‘A quarter of the UK population increase happened in London. Together, London, the South East and East of England accounted for over half the growth.’

London, already the largest city in the EU and the ninth largest in the world, is still growing rapidly The population pyramid shows how many people of each age there were, including the large numbers of so-called baby boomers and the low birth rate a decade ago

One in three migrants arriving in Britain went to London. International net migration – the number of immigrants minus the number of emigrants – was 69,000.


Simon Ross, of pressure group Population Matters, said: ‘Our growing population is the root of many of our most pressing problems, including a lack of housing, pressure on services and development threats to our countryside and green spaces.


‘These, together with consequent infrastructure investments and transport issues are increasing costs for everyone.


‘Measures by the Government to limit net migration are to be welcomed. However, the Government should also promote the benefits to individuals and society of smaller families.’