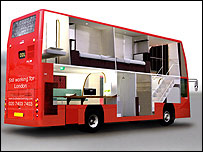 Each bus is designed to be environmentally friendly


Falling asleep on the bus is about to become easier as a new scheme providing short-term housing aboard double deckers is to be launched.

Eight buses have been refitted with kitchens, bathrooms and living space.

The buses, with solar panels and recycling bins, will be lent to a London homeless charity over Christmas.

Double Decker Living, a new London company, aims to provide alternative housing for the homeless and key workers such as NHS staff on call.

The idea for the bus, which can house up to five people, was prompted by the phasing out of the Routemaster, the distinctive hop-on, hop-off red London bus.

"The double decker is such an iconic London image, we wanted to see what we could do with it," said Jason Hart of Double Decker Living.

"Everyone I speak to laughs because it sounds so strange but once they see it for themselves, they become very enthusiastic about the idea."

For the first stage of the project - to be launched on 19 December - Leyland Olympian double deckers are being used, but plans are under way for a Routemaster version.

Centrepoint charity for young homeless people will use the buses as teaching venues for life skills classes, covering topics such as cooking and interview preparation.