What American cities can learn from British cities

London: When it comes to tackling urban sprawl and preventing congestion, British cities are ahead of their American counterparts

The British have long looked to US cities for inspiration. Now Americans are starting to seek UK solutions to their urban problems, says Dermot Finch of the Centre for Cities.

Gleaming skyscrapers, the land of opportunity, pursuit of the American Dream - many admire major cities in the United States and their dash of extra polish. In 2006 alone, more than 30,000 Brits left to try their luck Stateside.

Leading Labour and Conservative figures regularly look to the likes of New York and Chicago to fix urban problems back home. The Tories' new welfare to work proposals were modelled on existing schemes in New York and Wisconsin. And John Prescott and David Miliband both made ministerial study tours of the US a top priority.

But the reality behind the shining urban bastions of the American dream isn't always so rosy. When it comes to preventing urban sprawl and tackling congestion, UK cities are actually further ahead.

So what can UK cities - which have benefited from a decade of strong economic growth - teach their Atlantic neighbours?

Since Ken Livingstone, the previous mayor of London, brought in the congestion charge in 2003 (amidst a barrage of criticism and only reluctant support from the government), the volume of traffic entering the congestion charge zone has fallen by over a fifth - with bus use increasing by 15%. Meanwhile the £125m extra cash generated by the charge (after its upkeep costs) goes straight back into public transport. 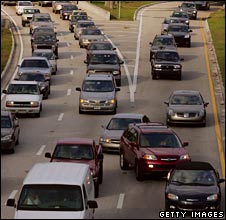 
This week the Department for Transport announced its support of Manchester's own charge proposals - although until more of its critics are won over, the future of the charge continues to hang in the balance.

Miami, Minneapolis, Seattle and San Francisco are also currently looking to London's congestion charge to solve their traffic problems. The charge in London has its critics, particularly concerning the charge amount and the western extension, and there are still problems with congestion caused by road works in parts of the capital. But the fact that the charge survived the change in mayoralty is testimony to its success - and the likes of Seattle and San Francisco could learn from the scheme's successes and limitations.

In 1996, the Conservative government took action to stop UK city and town centres and their High Streets turning into ghost towns. 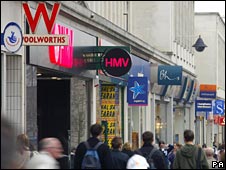 Britons shop in the High Street


Whilst not everyone supports recent city centre redevelopments, by putting town centres first in the planning rules, successive governments have reduced the number of car-dependent shopping centres being built - and encouraged more shops and offices into city centres.

HOW TO BEAT SUBURBAN SPRAWL

The Labour Government went on to take further steps to stop UK cities and towns sprawling like their American equivalents. Atlanta and Los Angeles have become known for the segregated neighbourhoods, lengthy commutes and gridlock that resulted from suburban sprawl. 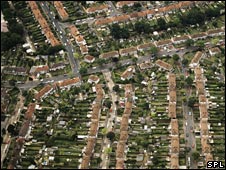 Living in a box, London style

Reusing urban land where possible, rather than building on Greenfield sites, has helped cities like Leeds and Bristol to avoid far-flung car-dependent suburbs proliferating. In 2000 the Government introduced a housing density target for new housing developments of 30-50 homes a hectare - where it's appropriate to do so. By 2006, new homes were being built at an average density of 40 a hectare.

The British experience suggests that American cities would benefit from a strong steer from the federal government to make neighbourhoods denser and less dependent on private transport.

The decline of British industry after World War II saw UK cities and towns riddled with social and economic deprivation, and largely neglected by central government. 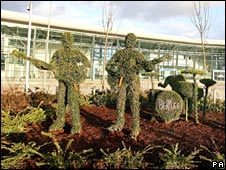 Liverpool is European Capital of Culture 2008

Ex-industrial cities like Leeds and Sheffield have seen jobs growth of 15% and 25% respectively in a single decade. Who would have thought 10 years ago that Liverpool, the European Capital of Culture, would be welcoming its two millionth visitor so far this year?

That Gateshead would be hosting the Conservative Party's 2008 spring conference?

There has been no equivalent high-profile championing of urban development and regeneration by the US government in recent years - American cities have been missing out. 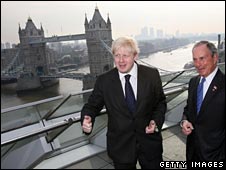 
Of course, we can and should continue to learn from US cities. For one, US city mayors have more control over their own finances - meaning that they can innovate more and grow their economies as a result. Only 5% of all tax revenues are raised by local councils in England, compared to 41% in the US.

Policy learning can go both ways. A recent visit to London's new mayor by Michael Bloomberg, the mayor of New York, and the promise to exchange expertise and personnel on London transport and crime reduction in the Bronx could signal an end to this one-way traffic.

British ministers have for too long gone cap in hand to the US for ideas on how to improve our cities. With cities and towns on both sides of the Atlantic now facing tougher economic times, isn't it time for our two nations' cities to share the best of both? As the US political parties gear up for the Democratic Convention in Denver and the Republican Convention in St Paul, Minnesota, the question is more relevant than ever.

Dermot Finch is the director of the think-tank Centre for Cities.

Re: What American cities can learn from British cities

Jun 15th, 2008
Well, I hope it works. We live in a rural area and I like it here. I don't want city life encroaching on my domestic bliss. We gave up a lot of conveniences by living out here and are happy with that.