OpposingDigit
+2
#1  Top Rated Post Nov 23rd, 2017
The FCC in the U.S. is about to change the rules concerning Net Neutrality.


This change is very important .... It will disallow the use of VPN's.
https://en.wikipedia.org/wiki/Virtual_private_network


North American users will only be allowed to cruise "Government Approved" websites.


Shutting down RT (Russia Today) is only the beginning of censorship.

Nov 23rd, 2017
Be happy you live in Canada.. you’ll still have the CBC and the Beachcombers.

Wanted in the U.S. under criminal copyright violation charges, Dotcom said that despite Edward Snowden's revelations about NSA spying opening up "the eyes of the world" to government intrusions on our privacy, little would change without action.

Two years ago, Dotcom started work on his solution, which he announced in June: A new Internet called MegaNet.
Kim Dotcom reveals more about his alternative Internet


Justin Trudeau Is Very Concerned With FCCs Plan to Roll Back Net Neutrality: We need to continue to defend net neutrality

Send this too you Conservative friends and relatives and tell them to pass it on........ 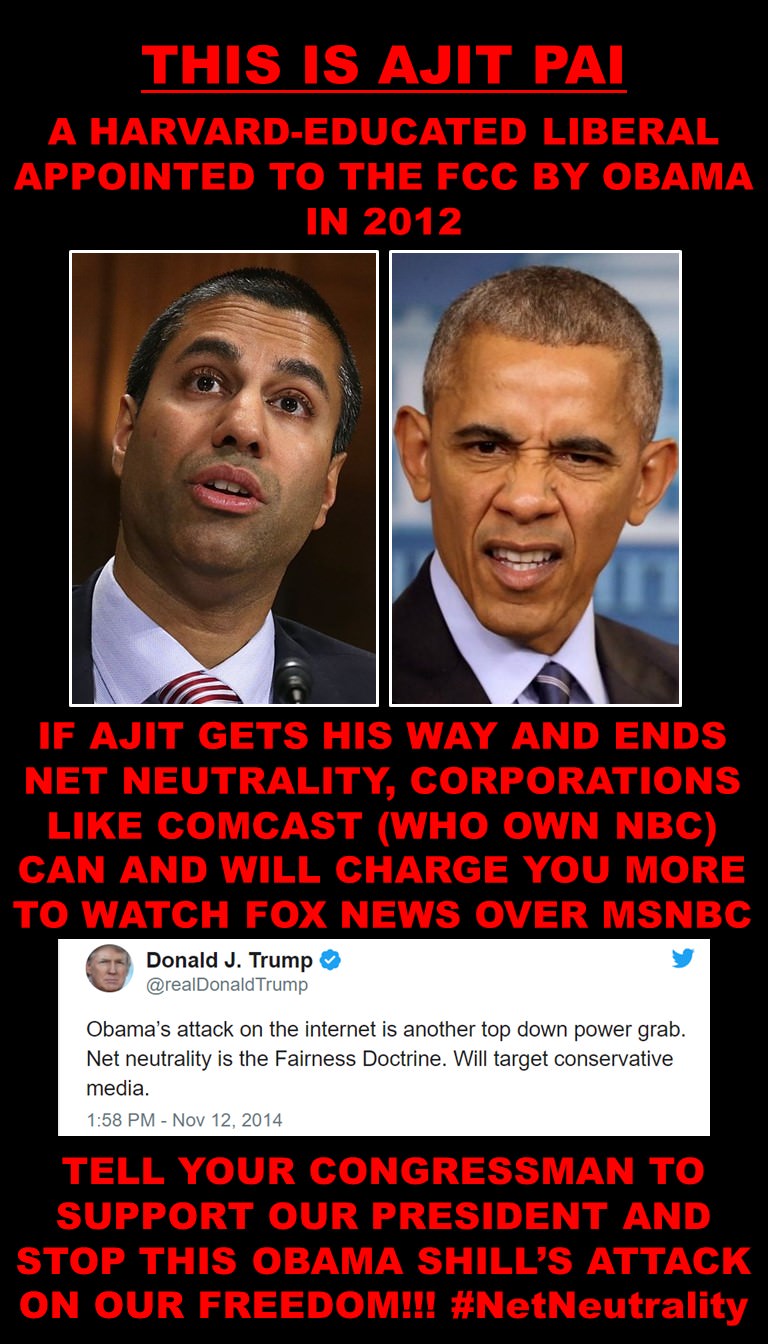 The FCC in the U.S. is about to change the rules concerning Net Neutrality.


This change is very important .... It will disallow the use of VPN's.
https://en.wikipedia.org/wiki/Virtual_private_network


North American users will only be allowed to cruise "Government Approved" websites.


Shutting down RT (Russia Today) is only the beginning of censorship.

That only tends to make them more popular with the people who prefer to think for themselves. Shutting down all outlets of the same stories they carry (and Sputnik) never stops the story but the 3 or 4 delay can be used to put the slant the US wants. (like an S-200 didn't damage an F-35 on it's maiden voyage over hostile territory)
It should mean that a big operation is about to happen and they only get one shot at it.

If color in text mattered I think somebody would have figured out how to use it already.

Nov 23rd, 2017
The quickening of the economic collapse of the American Empire seems to have placed the "State" into a hurried sphere of total and absolute control of citizens. Britain did not collapse as an empire overnight. It began in 1870 and totally collapsed after World War I. As with North America, Britain introduced Free Trade in 1870 in order to allow the Capitalists the unfettered ability to move their wealth offshore and into North America ..... Just as what is happening with China trade policy at this moment in time. The tax cuts proposed by Trump is an attempt to keep the financiers whole as the American Dollar continues to be devalued.

Each country is going to have its own internet and you will need a password/licence to leave the "State" owned internet and browse other content elsewhere.

The American tech giants will slow down the viewing of all anti-government views/content in order to discourage and harass/censor such content.

You will be required to have a broadcasting licence to upload video content.

Pot is now being legalized because there is no need to use drug laws to monitor young people anymore. The NSA and countless other cyber agencies now does this type of monitoring in spades. (And no warrants required.) Heroin production has increased 90 percent since the invasion by American forces and it is being used to finance the American military. Just as what happened during the Vietnam wars and the drugs upon the American streets during that time.

All NATO members will leave the United Nations (including Israel) as the economy continues to collapse and as China takes its rightful place upon the world stage. NATO will attempt to become/remain as the world policeman and not the UN. This is why we see an ever increasing role of NATO enlargement beyond the North Atlantic Treaty Organization.

You can't deceive the whole world if you don't have a worldwide communication system in place. There is a saying, 'Many hands make for light tasks.' There is probably a reason it doesn't say the opposite.