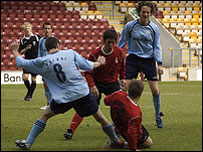 David Curran, 25, a PhD student on the Peace team, said: "It was a very competitive game of football."

About 200 people turned out at Valley Parade on Sunday, where they saw Peace FC stumble to a 1-0 defeat.

However, the team carried a 1-0 cushion into the clash after winning the London leg of the match on 26 February.

"It was great to be on a good pitch at a good ground. 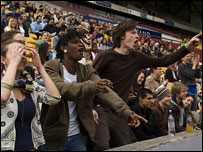 About 200 people soaked up the unusual atmosphere

"It was a really good day - everybody enjoyed themselves."

Mr Curran added that about £250 had been raised for charity.

The Peace Studies side was drawn from players at all academic levels, including undergraduates, MA and PhD students.

The team boasted a mix of nationalities, including players from Japan, Angola, Germany and Brazil.

Bradford's Peace Studies department, founded in 1973, is claimed as the largest such academic centre in the world, with 400 students from 40 countries. The event was part of Bradford City's Community Week, which got under way as the regular football season finished.