Blackleaf
#1 Apr 4th, 2020
The real Grand National didn't occur today but, thanks to modern technology, a virtual Grand National took place and was shown on TV, with punters still able to bet... 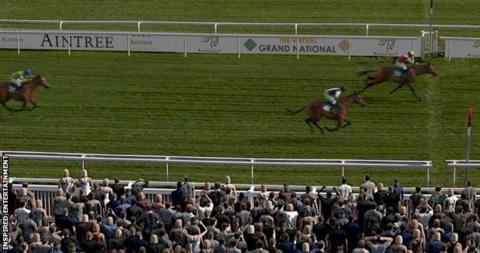 Potters Corner has won the televised Virtual Grand National after the big race was cancelled because of the coronavirus pandemic.

Bookmakers offered odds, with profits going to NHS Charities Together.

All horse racing in Great Britain has been suspended until at least the end of April.

Forty runners who would have been most likely to line up at Aintree took part, using CGI technology and special algorithms.

Tiger Roll had been due to seek an unprecedented third consecutive win in Saturday's big race before it was called off on 16 March.

The animated version had much of the drama associated with the actual race, with long-time leader Aso falling in the closing stages.

A virtual race of champions preceded the main event, televised on ITV, in which triple National victor Red Rum ran out the winner.

The animations included virtual ambulances following the runners and riders around the course, and shots of excited spectators.

Jockeys watched from home and entered into the spirit of the event with posts on social media.

"Well I got around, I'll take that," said champion jockey Richard Johnson.

A spokesperson for Carm Productions, which was behind the idea, said: "Let's hope it has entertained racegoers and the wider public. We also hope it has been able to help raise funds to support the NHS at this important time."