Blackleaf
#1 Nov 11th, 2013
A group of riders dressed in red have created the world's largest poppy for Remembrance Sunday.

About 15,000 bikers travelled along the M25, which is Europe's busiest road and which circles London. The road is 117 miles in circumference.

The event raised £2,300 for the Royal British Legion. 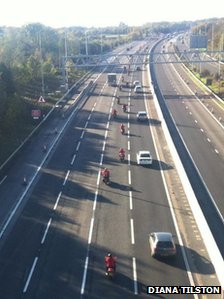 Thousands of bikers dressed in red have been riding around the 117-mile (188km) clockwise carriageway of the M25 for Remembrance Sunday.

Organiser Julia Stevenson, from South Darenth in Kent, urged clubs, groups and enthusiasts to be at service stations by 12:30 GMT.

They then converged on to the motorway at different points until all the groups had caught up with each other.

More than £2,300 was raised for the Royal British Legion.

The bikers were cheered on by people watching from the bridges over the motorway.

Ms Stevenson said it had been a huge success and a complete "ring of red" had been achieved.

The motorcycle riders were asked to wear something red, or a red helmet cover and a poppy. 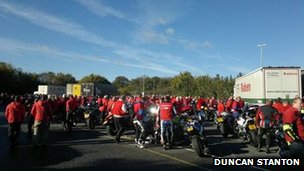 The M25 was turned into a poppy

"There has always been an affinity between the biking community and the armed forces," Ms Stevenson said.

"Perhaps this stems back to when dispatch riders were used to carry vital messages to and from the front lines.

"This is an opportunity for the biking community to offer a mark of respect to those who have fallen defending our freedoms and liberty."

The actual number of bikers that took part is not known, but Ms Stevenson had estimated that about 15,000 were needed in order to complete "the world's largest poppy".

Another biker, Duncan Stanton, from Surrey, tweeted : "not sure what the bike count was but there were a hell of a lot."