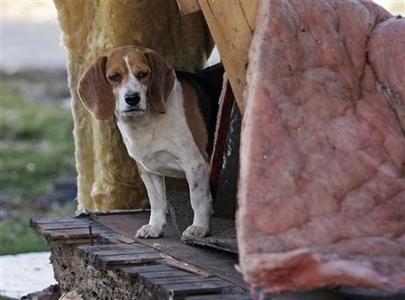 (Reuters) - Powerful storms that spawned tornadoes ripped through the U.S. Midwest on Wednesday, killing at least 12 people, including six in Illinois who were crushed when a house was lifted up and fell on them, authorities said.


The violent weather that hit six Midwest states starting in Kansas and Missouri overnight swept into middle Tennessee and slammed the Cumberland Plateau region, about an hour east of Nashville, killing two women in Cumberland County and one person in DeKalb County, according to emergency agency officials.


Three people in Missouri were also killed by a storm that struck during the night. A tornado temporarily closed the famous entertainment strip in Branson, Missouri, where country music shows and other performers draw thousands of people a day.


In Harrisburg, the six people were killed when powerful winds lifted a house up and dropped it on top of other homes in a housing subdivision adjacent to a wrecked shopping strip.


"There are hundreds of homes damaged, millions of dollars in damage. The hospital is severely damaged. There's a mall with 10 stores that was destroyed," Gregg said.


Mike Hancock, an employee of the U.S. Forest Service, and several others armed with tools attempted a rescue where the six people died.


"We crawled in there as much as we could. Then there wasn't enough stability, the whole foundation was shaking. We had to get out of there," he said.


The National Weather Service's Storm Prediction Center rated the Harrisburg tornado an EF-4, or one notch below the strongest tornadoes, meaning it packed winds of up to 200 miles per hour. The EF-4 rating put it on par with the devastating tornado that killed 64 people in Tuscaloosa, Alabama, last April, and one notch below the massive EF-5 Joplin storm that flattened whole sections of the Missouri town.


The violent weather prompted reports of 18 tornadoes across six states, including Nebraska, Kansas, Missouri, Illinois, Indiana and Kentucky, according to the National Weather Service.


Forecasters said there was no relief in sight as the stormy weather headed east to the Mid-Atlantic states and parts of the Southeast.
"We have a number of strong, severe storms ongoing from the Appalachian Mountains through the Southeast, said meteorologist Jared Guyer of the National Weather Service Storm Prediction Center.


There were tornado watches issued for parts of Mississippi, Alabama, Tennessee, Kentucky, Virginia, West Virginia and Ohio.
FEAR OF ANOTHER DEADLY YEAR


The storms raised fears that 2012 will be another bad year for tornadoes after 550 people died in the United States from them last year, the deadliest year in nearly a century, according to the Weather Service. The highest death tolls were from an April outbreak in Alabama and Mississippi that claimed 364 lives, and the tornado in Joplin on May 22 that killed 161 people.


In Harrisburg, a stretch of the normally busy shopping strip along Highway 45 was a mass of splintered wood, signage and debris from collapsed stores.


The tornado smashed a Forest Service headquarters serving the nearby Shawnee National Forest and a Walmart, and ripped away a wall from the hospital. A truck trailer and cars were upended. Dozens of people were injured, suffering broken bones and cuts, Mayor Gregg said.


A suspected tornado killed a person in a mobile home park in rural Buffalo, Missouri, and 13 people were injured by a suspected twister, said Lamont Swanson, coroner for Dallas County.


A man in Stoddard County in southeast Missouri was killed when his mobile home was destroyed. His wife was severely injured.
"It looks like it just exploded," Dale Moreland of the county's emergency management service said of the home.


A 70-year-old man died in Cassville, Missouri, when he was thrown from his mobile home by high winds, Barr County Sheriff Mick Epperly said in a news release.


There had been two tornado-related deaths in 2012 before these storms, both in Alabama on January 23.


Rogers said at least five homes caught fire, the roof of an elementary school gymnasium in Muhlenberg County was blown off, but no students were injured.


A suspected tornado a half-mile wide damaged more than 50 homes in southern Indiana, said Madison Seib, a public information officer in Warrick County, Indiana. Warning sirens alerted residents to take cover, and there were no serious injuries, she said.


The tornado in Branson caused mostly minor injuries to about 30 people, damaged three theaters, four or five hotels and numerous stores that will have to be closed for a while, said Ross Summers, president of the local chamber of commerce.


"Some businesses will take some time to reopen, no question about that," Summers said.


The storm struck early Wednesday, after entertainment shows had shut down and about two weeks before the busy tourist season begins, city officials said.


"We are still in shock," said Rose Atchley in the city administrator's office. "The strip is totally shut off. There is lots of debris here and there. We are struggling along."