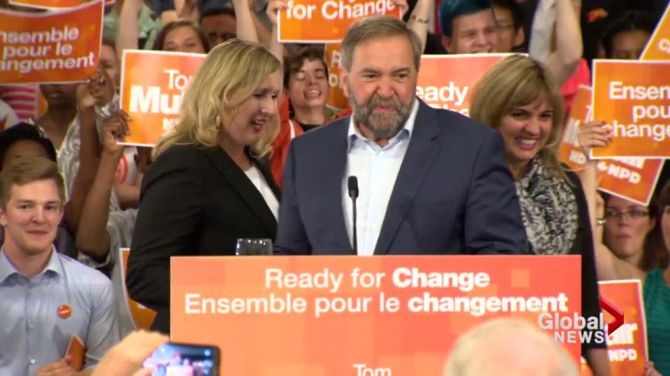 WATCH: There’s another sign change could be coming to the national political landscape. A new poll conducted for Global News puts the Conservatives in third places, seven points behind the NDP. Eric Sorensen takes us through the numbers.

If an election were held today, Tom Mulcair would be Canada’s next Prime Minister.

The latest seat projections taken from an aggregate of opinion polls suggest Mulcair’s New Democratic Party could win 130 seats in the House of Commons – 11 more than Stephen Harper’s Conservatives and 44 more than Justin Trudeau and the once-powerful Liberal party.

“Two months ago one couldn’t have imagined this,” Barry Kay, a professor at Wilfrid Laurier University said about the seat projections.

Kay and his team at the Laurier Institute for the Study of Public Opinion and Policy (LISPOP) compiled the seat projections using a blended, weighted sample of over 8,000 respondents to Ipsos, Angus Reid, and Ekos polls conducted between May 27 and June 23.

And the seat projections show surging support for the federal NDP, and a changing political landscape in Canada since the NDP won the Alberta election.

The NDP is strongest in Quebec, where according to the projections, the party could take 60 of the 78 seats. The Liberals control 11 in Quebec, while the Conservatives are set to take five seats. The Bloc Quebecois is poised to win two.

The projections show a closer race among parties in the rest of the country. With the exception of British Columbia, most of the provinces are leaning Conservative, according to the LISPOP projections.

The seat projections mark a continued decline for the federal Liberal party which is poised to take only 86 seats.


“Justin Trudeau had a big lead for over a year, a year and a half almost, after he took over the leadership,” Kay said.

“But little by little that seems to be frittering away.”

“It’s very definitely real. And it’s real for two reasons; one, it seems to be enduring, so it’s something that we’ve picked up as a trend over the space of the last couple months,” Bricker said.

“But the second thing is that the NDP is now very strong in all the places that it needs to be strong.”

The regional races differ – some are close, like in Ontario, which Ipsos considers a statistical tie. Other races, like Quebec and British Columbia, point to the NDP as outright victors. The Liberals have a commanding lead in Atlantic Canada, and the Tories continue to be the most popular party in Alberta, according to the Ipsos poll.

While the NDP’s win in Alberta was a watershed moment for the left-leaning party, at least some of the NDP’s surge seems to be coming at the expense of Harper’s Conservatives, whose approval numbers have dropped nearly 10 percentage points recently, Bricker said.

Laurier professor Kay suggested the recent departures of high-profile conservatives like John Baird, Peter MacKay, and James Moore may be because they “see the writing on the wall.”

“[Moore’s] seat in suburban Vancouver for example, I think is very much in jeopardy,” Kay said. “The NDP is on the rise there.”

But it’s still early. Voters don’t cast a ballot until October, and in that time, voters can easily change their mind. A side-effect of their growing popularity, Bricker expects voters will take a more critical view of the NDP in the coming months.

“A desire for change finding its way over to the NDP and now they’re going to start getting the type of scrutiny I would expect from voters as we get closer to election day that Mr. Trudeau has experienced in particular over the space of the last year.”

But even a more critical view of the NDP alone won’t secure Harper another election night victory. Harper needs to begin addressing the public’s concerns with his performance, Bricker said, instead of relying on attack ads to win him the election.

One area where Harper can separate himself from his rivals is Canada’s mission against the Islamic State (ISIS). The Conservatives are for the mission, while the NDP and the Liberals both oppose it.

“It happens to be a good cleavage point for the Conservatives,” Bricker said. “It’s really something that he can put the other two parties on the other side, really muddy up the water a little bit and really stand alone on an issue in which he knows that he’s on side with Canadians.”

ANYTHING But Justin Trudeau.

Even If you have to hold your nose for 4 years

So be it... at least it won't be that snot nosed kid trading on his daddy's name.

The world saw what happens when you vote for somebody based on their last name. 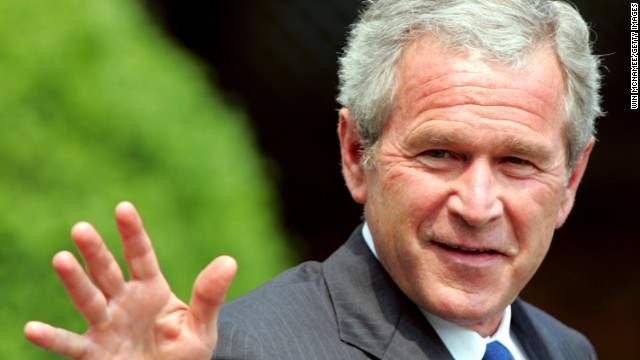