Blackleaf
#1 Jan 5th, 2019
Liberal German writer Jochen Buchsteiner admires the British for having an argument which Germans shirk, the former Australian prime minister John Howard, or American constitutional experts who wonder why a free country like Britain ever submitted its laws to the ultimate arbitrament of an exterior power.

These are amongst the many foreigners who admire Brexit... 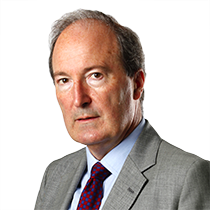 Neil MacGregor, OM, is not only a great museum director, but also  in as much as British culture tolerates such a thing  a great public intellectual. When he ran the National Gallery, he showed us on television how Christian art saw salvation. When he directed the British Museum, he explained the world in 100 objects. Early this century, for this newspaper, I got him to write a beautiful part-work about the greatest paintings in British public collections. In all his expositions, he has a genius for using the particular to explain the general.

Nowadays, MacGregor lives in Berlin. From that vantage point, he looks back at his own country. Hence his series, which ran every day on BBC Radio 4 this week, called As Others See Us. On each day, MacGregor visited a single country  starting with Germany, continuing through Egypt, Nigeria and Canada, and ending up yesterday with India. In each, he chose three thinkers, writers, political or business leaders, and asked them to tell him how they regard Britain today.

I found most of what they had to say fascinating  full of nuance, combining, as MacGregor himself put it, affection and exasperation. The positive British characteristics which came through most strongly were parliamentary democracy, our monarchy, language and literature, eccentricity, and the notion that London, because of its openness, is, in some sense, the capital of the world  the place where all things were possible.

The negatives most often mentioned were linked to the positives, because both derived from the colonial era. Exploitation, greed and repression on the one hand, freedom, cricket, English, global reach on the other. This partly reflected the fact that four of the five countries chosen had formerly been ruled by Britain.

What was odd, though topical, was the frame in which MacGregor chose to bind his picture. It was Brexit. Each programme began with strains of Land of Hope and Glory and a recording of Boris Johnson (unnamed) promising the British people in 2016 that, if they voted Leave, polling day would be Independence Day. Then came the quotation from Robert Burnss poem (To a louse) which gave the programme its title. Burns laments that we do not have the gift to see ourselves as others see us. The Brexiteers were in the dock.

In an interview launching the series, MacGregor said that, as he followed the Brexit debate from Germany, it became so obvious that what was being said in the UK was incomprehensible. Either it was historically untrue or else it was a misreading of the EU as it actually is.

The Russians and Americans did indeed win, but MacGregor leaves out the small point that neither was even in the war until the second half of 1941. In 1940, the British Empire did stand alone against Hitler. I was interested to learn that the Germans, of all people, have forgotten that. Brexiteers, it would seem, do not have a monopoly of historical untruth.

Poor MacGregor had a struggle to get most of his interviewees to condemn Brexit. Several said it was a matter for the British people. The majority seemed to prefer other subjects. He managed, however, to coax a few worries out of them about shutting the gates, holding a referendum in a parliamentary system and turning our back on Europe. A couple of voices tentatively suggested that Brexit was of positive interest  expressing a voice that politics was not listening to  but such thoughts were not pursued.

It struck me as a wasted opportunity. Wouldnt it have been much more original to hear foreigners really engaging with the questions Brexit raises? Couldnt a decent proportion of MacGregors choices have been people who understand it  the liberal German writer Jochen Buchsteiner, for example, who admires the British for having an argument which Germans shirk, the former Australian prime minister John Howard (MacGregors fellow OM), or American constitutional experts who wonder why a free country like Britain ever submitted its laws to the ultimate arbitrament of an exterior power?

Take that idea of Independence Day, for which the programme implicitly mocked Boris. Representatives of all the five countries chosen by MacGregor identified, unprompted, such days as being vital in their own histories  Canadas in 1867, Nigerias in 1960, Indias freedom at midnight in 1947, Egypts overthrow of British power, and German reunification, because of the defeat of Communism, in 1990. Sloughing off the imperium of an exterior power is never easy, but most of the modern world is founded on such independence days. Perhaps this is what Britain, if independent after two generations of rule from Brussels, will start to achieve from 30 March.

I single out MacGregors programme not because it was ghastly  it wasnt; it was civilised  but because of its failure of intellectual reach. It appeared in the same week as the vice-chancellors of every single British university announced, preposterously, that a no-deal Brexit would set them back by decades. Surely one of the duties of people with brains is to think for themselves, not to act like the trade union of a failing nationalised industry in the Seventies. If there is a major new movement in human affairs, it is not enough just to deplore it and huddle together with others who do so.

Such a movement is glaringly visible in the Western world today. Far from global institutions being the only shape of the future, great nations are becoming ever more clearly delineated. America and China, Russia and India, are accruing more power. The EU is watching its own drain away, because its citizens do not fully accept its authority.

Twenty years this week after it invented its own currency, it has failed to bring about the prosperity the euro was supposed to engender and the political union for which it was supposed to pave the way. There is no country in the EU where mainstream, integrationist parties are stronger now than they were five years ago. It is highly likely that anti-federalist parties will make big pan-continental gains in the European Parliament elections in May.

It just is not good enough for clever people who dont like what is happening to condemn the stupidity of those demanding change. They must ask themselves why their own beliefs are on the run.

No one of a conservative disposition feels easy when there is such flux. In this sense, one must sympathise with the Neil MacGregors. There is much worth saving from the fall of the Brussels empire, as there was from the Roman and from the British. The rules-based international order for which it stands needs to be rescued, but re-based on realistic rather than Utopian principles  the sort of thing at which British pragmatism excels. Our educated elites are shirking this responsibility; and poor Mrs May, with her deal that theoretically lets us leave but actually binds us in forever, is failing to fill the vacuum.

At this strange moment in our history, one gets more sense out of the Democratic Unionist Party than our allegedly greatest minds.

Jan 5th, 2019
The UK will need friends after Brexit. I would personally support Canada adopting unilateral free trade towards the UK. Not only would it benefit the UK but Canada too.

Of course unilateral free trade has its limitations in that it can address only tariffs and quotas, but even that alone could provide immediate benefits even before we negotiate a trade agreement that could address packaging-and-labelling, phytosanitary, and other regulations which would inevitably take time to negotiate. Should Canada adopt unilateral free trade towards the UK, this would allow any trade negotiation to then skip tariffs and quotas and jump straight to negotiating different regulatory rules.

Better yet, it might prompt the UK to reciprocate: but even if it doesn't, unilateral free trade would benefit Canadian consumers none-the-less.

I would also support open borders towards the UK too that would allow a UK citizen or permanent resident to transit, visit, study, work, or do business here visa-free but not to collect social assistance.

Again, it would benefit Canadian businesses whether the UK reciprokates or not: and better yet, it could prompt the UK to reciprocate and so benefit Canadian workers too.
Last edited by White_Unifier; Jan 5th, 2019 at 07:16 AM..

Jan 5th, 2019
In fact, the UK might reciprocate out of a fear that if it doesn't, Canada could decide to cease its unilateral actions.

And if the UK does reciprocate, then that would accelerate any future trade negotiation by skipping any discussion of tariffs, quotas, and other such superficialities altogether.
Last edited by White_Unifier; Jan 5th, 2019 at 07:18 AM..

Jan 6th, 2019
Lefty liberal Channel 4 - which has just 9% of its workforce from working class backgrounds - is soon to air this piece of anti-Brexit propaganda. So the establishment and media still can't quite work out what democracy means.