Remainers got it wrong about the employment rates

Blackleaf
#1 Aug 13th, 2019
33 million Britons are in employment, the second-highest number of any EU member state after Germany (in contrast, France, with a similar population to Britain, has just 25 million people in employment).

One million more Britons are in work since the EU referendum, despite the warnings from Project Fear...

ALEX BRUMMER: One million more in work since Brexit vote - could Project Fear have been more wrong? 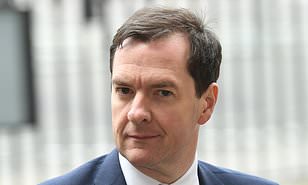 George Osborne, Chancellor of the Exchequer between 2010 and 2016 and architect of Project Fear

Britains vibrant jobs market is one of the pillars of our economy.

In defiance of the doomster predictions of three years ago, a spectacular one million jobs have been created across the economy and, so far, the much-predicted recession has been avoided.

The UKs impressive record on creating jobs contrasts starkly with most of our EU trading partners, who are suffering unprecedented and unmovable levels of youth unemployment.

The latest employment figures must stick in the craw of former chancellor George Osborne.

The reverse is true. At just 3.9 per cent of the workforce in July, the level of unemployment is at its lowest since 1974, when John Denver was No 1 in the pop charts with Annies Song.

Moreover, despite howls from Labour and the unions that many of these new jobs are part-time, based on zero-hours contracts or in the much-maligned gig economy where people do freelance work, the official figures show that 2.8 million of the 3.8 million jobs added since 2010 are fulltime.

An equally healthy sign is that the workforce is experiencing a pay bonanza, with average weekly earnings climbing by 3.9 per cent for regular pay.

As a result, extra money is going to most working households.

With wages running well ahead of inflation, which stands at 2 per cent, there is a strong expectation that consumers will continue to spend, thus stimulating economic growth and reversing the blip seen in the second quarter of the year.

With more people in work, income tax and National Insurance receipts will increase, allowing the Government to spend more on the NHS, prisons, policing and infrastructure without having to risk wrecking the rebuilding of the public finances.

Indeed, Chancellor Sajid Javid will be mightily pleased as he prepares a public spending package for next month.

Crucially, almost every area of the working demographic is benefiting.

Unemployment among women is at a record low of 3.6 per cent of the workforce  although admittedly, either by choice or necessity, many women are doing more than one job.

And, in huge contrast to whats happening among our soon-to-be-no-longer EU partners, youth employment here has fallen by 46 per cent since 2010 to just half a million, or 10 per cent.

This compares to a 23 per cent youth jobless rate across the EU. At its worst, in Greece, 39.6 per cent of the benighted young are unemployed. In Italy, the figure is 28.1 per cent.

Britains jobs boom has occurred in defiance of panicky signals from the Bank of England and other key City opinion-formers, who have repeatedly claimed that business confidence is at a low ebb because of the uncertainty surrounding Brexit.

And, yes, there has been evidence that firms have found it cheaper to hire extra staff in warehouses, factories and service industries rather than invest in capital infrastructure.

This would explain why UK productivity  the measurement of the amount of goods or activity per worker  lags behind that of our competitors.

But there is reason to believe that the official figures do not give a full picture of how Britains mature digital economy is thriving because financial transactions on mobile phones, deals done by computer and surveys conducted online are not properly recorded.

Of course, the naysayers will never be happy.

Their current whinge is that too many new jobs are in coffee shops or in the food delivery industry.

They are wrong. The Office for National Statistics reports that in the year to March, by far the greatest number of new posts were in the scientific, professional and technical area, where 150,000 people were added to the workforce.

A further 80,000 were added in IT and communications.

In other words, Britain has vacancies for people whose skills are propelling research and development and in the digital economy.

Vacancies  a sure sign of a robust economy  have increased in every year since 2012, although they have begun to fall this year as Britain has reached the nirvana of near full employment.

How ironic that the current total number of vacancies is 820,000  exactly the number of jobs that George Osborne, the architect of Project Fear, told us would happen after a Leave vote.

Re: Remainers got it wrong about the employment rates

Re: Remainers got it wrong about the employment rates

REMEMBER Project Fear? Leave the EU without a deal, we kept being told, and we would face cataclysm.

There would be 17-mile traffic jams at Dover. Supermarket shelves would be empty. Hospitals would run out of medicine. And, according to one Remain-supporting businessman, we would even end up with riots on the streets.

Many Remainers are trying their hardest to resurrect their predictions of chaos, but it is an uphill struggle.

This week, two people who know rather a lot about the movement of goods across the Channel  the chief of the Port of Calais and Lord Wolfson, chief executive of clothing chain Next  have scorned the idea that trade between Britain and the EU will grind to a halt if, as seems increasingly likely, we leave with No Deal on October 31.

It is especially significant in Lord Wolfsons case because, a year ago, he admitted to being worried about the consequences of No Deal.

But since Boris Johnson took over from Theresa May, he says, the Government has made it clear it is making very serious preparations.

There is now no reason to fear gridlock, empty shelves or any other serious problem.
Wolfson cited two measures in particular which have made a difference.

The Government has announced transitional arrangements which will mean that, for 12 months at least, lorry drivers will not have to fill in forms at the border.

Ministers have also published a tariff card, showing importers exactly what duties they will have to pay in the event of a No Deal Brexit.

That has allowed them to plan ahead and decide if they need to adjust their prices.

In the worst case scenario Lord Wolfson now expects mild disruption. Yet it might not even come to that.

Now that the EU can see Britain is serious about walking away from negotiations, it has every incentive to agree a deal with us  this time one which the House of Commons can enthusiastically approve.

We might have been to this point much sooner, of course, had May been serious when she set out her Brexit plans in January 2017 that No Deal is better than a bad deal.

Over the months, however, she seemed to lose confidence, to the point she was so frightened of a No Deal outcome that she was virtually going on her knees to *Brussels.

The EU duly obliged by offering the very worst deal  one which, through the devious device of the Irish backstop, could have left us in a permanent state of limbo, beholden to EU rules in which we had no say.

Under Mays premiership, Wolfson said yesterday, there was almost a wilful attempt not to prepare for No Deal.

As a result, we got to our original leaving date, March 29, with businesses still having little idea of what lay ahead.

Of course there are frustrated Remainers who wont take it from Lord Wolfson that there is no longer any reason to fear No Deal  given that he campaigned for Brexit.

But they will find it harder to ignore Jean-Marc Puissesseau, President of the combined ports of Calais and Boulogne.

He has a very simple way to describe the continued efforts of Remainers to try to predict disaster: Cest la bulls**t. As he put it perfectly: There are certain individuals in the UK who are whipping up this catastrophism for their own reasons.

As for the extra paperwork regarding tariffs, French ports and the hauliers which use them are well prepared.

If we find some with the wrong paperwork in the first days, Puissesseau added, well tell them you are bad boys, dont do it again.

So much for the image of vast tailbacks as lorry drivers and officials argue over rules.

Of course, the French authorities only control half the cross-Channel operation  the rest is run by British port authorities and Her Majestys Revenue and Customs.

True, it was the port of Dover which first raised the spectre of 17-mile tailbacks on the M20. But in many ways our ports will have the easier job  30 per cent of lorries travelling from Britain to France are empty and will require no paperwork.

That so many lorries travel back to other EU countries is a sign of the imbalance of trade in goods which exists between Britain and the rest of the EU  a huge £64billion trade gap last year.

Because EU exporters have the most to lose in the event of No Deal, there is every reason to hope that common sense will prevail and some sort of deal  even if just a temporary trade deal  will be completed in time for October 31.

But if not, we neednt be too bothered about the threat of tailbacks and still less about the threat of empty shelves. Supermarkets have, after all, coped with disruption before, such as during a strike by Calais port workers in 2015 which really did lead to long traffic jams on the M20.

There are Remainers who would love chaos, simply for the joy of being proved right. But in the event, Project Fear is likely to have to opposite effect.

Many people will make a special effort to avoid Channel ports on October 31 and will have stocked up their freezers in advance so that they will have no need to go shopping.

Dont be surprised if, come October 31, we end up with pictures of yawning customs officials and under-employed supermarket checkout staff asking: Where is everyone?

Ross Clark is a *columnist for The Spectator.