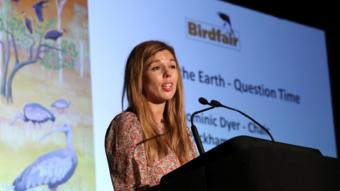 She gave a short address to the Birdfair environmental event at Rutland Water Nature Reserve.

She quit as director of communications for the Conservatives last year and is now a senior adviser for US environmental campaign group Oceana.

The 31-year-old works with the charity's marketing operation in London and a profile on its website describes her as being "passionate about protecting the oceans and marine life".

In her speech Ms Symonds said she was a newcomer to bird-watching, having become interested after visiting a puffin colony at Bempton in East Yorkshire.

She said she had been alarmed at seeing a picture of a slaughtered bird in a newspaper shortly afterwards, and condemned the trophy hunting of puffins.

Ms Symonds also referred to the "catastrophic levels" of plastic pollution in the oceans, adding that politicians and industry had a "gigantic responsibility" to care for the environment.

But she was "profoundly optimistic", saying those who cared for the environment, particularly the younger generation, were in a majority. My 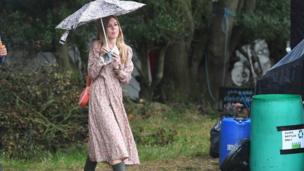 Ms Symonds wore a floral print
sustainable dress to the event.
The £225 garment is reported to be eco-friendly, having been made locally in London from a cotton blend that is biodegradable and which does not contain microplastics or dyes that pollute the environment.

Tim Appleton, founder of the annual event for birdwatchers, said it has raised £40m for global conservation projects in the 31 years that it has been running.

Appoint her to some senior position that would normally be held by someone with a history of public service.

OK then, so, do the Curios "Canadian" (yeah right!) thing, and hallucinate wildly and claim it's wisdom...while never being right about anything...