spaminator
#1 Apr 23rd, 2018
Liberal MP Drouin says allegation made against him at partys Halifax convention
Canadian Press
More from Canadian Press
Published:
April 22, 2018
Updated:
April 22, 2018 5:25 PM EDT
Prime Minister Justin Trudeau, wearing kilt, talks to reporters as M.P. Francis Drouin looks on while attending the 70th annual Glengarry Highland Games in Maxville, Ont., Friday, August 4, 2017. FRED CHARTRAND / THE CANADIAN PRESS
OTTAWA  Liberal MP Francis Drouin says an allegation has been made against him following an incident at the partys convention in Halifax this weekend.
Drouin, a 34-year-old MP from eastern Ontario, was described earlier this year as a rising star in the Liberal Party, with a firm grip on the agriculture file and standing as the most-lobbied backbencher on Parliament Hill.
In a statement released to the media and sent to Liberal MPs and staff Sunday, Drouin said he wanted to address reports of an incident in Halifax.
I can confirm that an allegation has been made, said Drouin. I believe it is important for individuals to have a safe environment to come forward, share their stories, and be supported. While no charges have been laid against me, I am co-operating fully with the investigation.
A Liberal who asked not to be identified said on Saturday Drouin was telling people at the convention that a woman had accused him of groping her backside at a bar near the convention site in downtown Halifax.
He was rattled, said the source, who added Drouin denied having done it.
Halifax Police are investigating an allegation of sexual assault which took place in the 1700 block of Brunswick Avenue in downtown Halifax around 2 a.m. Saturday morning, but would not confirm any other details of the incident. The location and timing is similar to the information the Liberal source was given, but police would not confirm if the assault allegation involved Drouin or anyone from the Liberal convention.
A spokesman for the police said he was unaware of any other allegations made about incidents in the area over the weekend.
Where it is an active investigation, we are unable to provide any other details, said Sgt. Brian Palmeter.
The allegation became the talk of the convention, which several Liberals said had a good vibe overall until this happened.
The alleged incident took place about 12 hours before the party held an hour-long seminar for MPs and staff called From #MeToo to never again: creating safe work environments. Prime Minister Trudeau was one of the attendees at the session. He said Saturday one seminar was not going to provide all the answers but that it was a good step forward.
Spokespeople for both the party and Prime Minister Justin Trudeau referred questions from the media to Liberal party whip Pablo Rodriguez. He had not responded to a request for comment as of Sunday afternoon, including whether the party has launched its own investigation or whether Drouin will remain as an MP pending the outcome.
Drouin did host a panel discussion with Agriculture Minister Lawrence MacAulay on Saturday after the alleged incident occurred.
The partys policy on caucus membership is unclear during these situations. Trudeau himself has said every situation is different, but has many times taken a zero-tolerance approach. In 2014, prior to becoming prime minister, he suspended Newfoundland and Labrador MP Scott Andrews and Montreal MP Massimo Pacetti after allegations of sexual misconduct involving other NDP MPs. Their suspensions were made permanent in 2015 after an independent investigation. Andrews ran as an Independent and lost in 2015 while Pacetti did not seek re-election.
Former Fisheries Minister Hunter Tootoo left cabinet and the Liberal caucus in 2016 to seek alcohol addiction treatment, and it later emerged that he had been having an affair with a young female staffer in Ottawa. The situation came to light when he broke it off with her to date her mother.
Calgary MP Darshan Kang left the Liberal caucus last summer after a staffer alleged he had sexually harassed and assaulted her. A House of Commons investigation concluded it could verify some of the complaints, including that he had improperly tried to get access to the womans hotel room in Ottawa. Kang now sits as an Independent MP.
Calgary MP Kent Hehr remains a Liberal MP, but did step down from his cabinet role in January amid allegations he made inappropriate remarks to women when he was an Alberta Liberal MLA. An investigation into those complaints is ongoing, and Hehr would not comment on them Saturday. Hehr also attended the sexual harassment seminar in Halifax and said it was an excellent session.
All political parties have grappled with how to handle allegations of sexual misconduct as the #MeToo movement has gained strength. Saturdays harassment seminar was the first time the Liberals have addressed the matter at a national convention.
Liberal MP Drouin says allegation made against him at party

“I believe it is important for individuals to have a safe environment to come forward, share their stories, and be supported. While no charges have been laid against me, I am co-operating fully with the investigation.”

I love this part.

He doesn't want to be accused of misogyny to boot.

Apr 25th, 2018
Liberal MP Francis Drouin says alleged sexual assault at Halifax bar a case of mistaken identity
Canadian Press
More from Canadian Press
Published:
April 24, 2018
Updated:
April 24, 2018 4:30 PM EDT
Liberal Francis Drouin and his wife, Kate, arrive at Gab's Sports Bar in Clarence-Rockland after winning the Glengarry-Prescott-Russell seat on Oct. 19, 2015.Bruce Deachman / Ottawa Citizen/Postmedia Network
OTTAWA  A Liberal MP who is facing an allegation of assault after a weekend visit to a Halifax bar is speaking out, calling the whole thing a case of mistaken identity.
Francis Drouin, who represents the eastern Ontario riding of Glengarry-Prescott-Russell, has issued a statement detailing his version of what happened in Halifax in the early hours of Saturday morning.
In it, Drouin  who was in Halifax for the federal Liberal policy convention  says that while he was chatting with friends, he heard a woman shouting from another part of the bar.
While I was standing facing the bar, with my credit card in hand, I heard what I believed to be a womans voice coming from another area of the establishment behind me, yelling that her buttocks had been grabbed, the statement says.
Her comments were clearly not directed towards me.
Drouin says he then shouted for the alleged perpetrator to be evicted from the bar, paid for his drink with his credit card and proceeded with his friends to another area of the establishment.
Thats when he says a woman with a cellphone mistakenly tried to connect him to the alleged incident.
We told her that she was mistaken. We left the establishment shortly thereafter.
Drouin says he proactively informed the Prime Ministers Office and the government whips office, and has been co-operating fully with a police investigation into the matter. A number of witness interviews have been gathered, he added.
He reiterated statements he made over the weekend stressing the importance of ensuring individuals are supported in a safe way when they come forward with allegations  but insists that in this case, it was all just a big misunderstanding.
I am confident that the facts of the issue will lead to a clear outcome.
Liberal MP Drouin says allegation made against him at partys Halifax convention
Halifax police confirmed Monday they are investigating a report that a woman had been sexually assaulted. But the regional police service did not specifically name Drouin.
A spokeswoman said no charges have been laid in the incident, which took place sometime after 2 a.m. Saturday at the Halifax Alehouse. 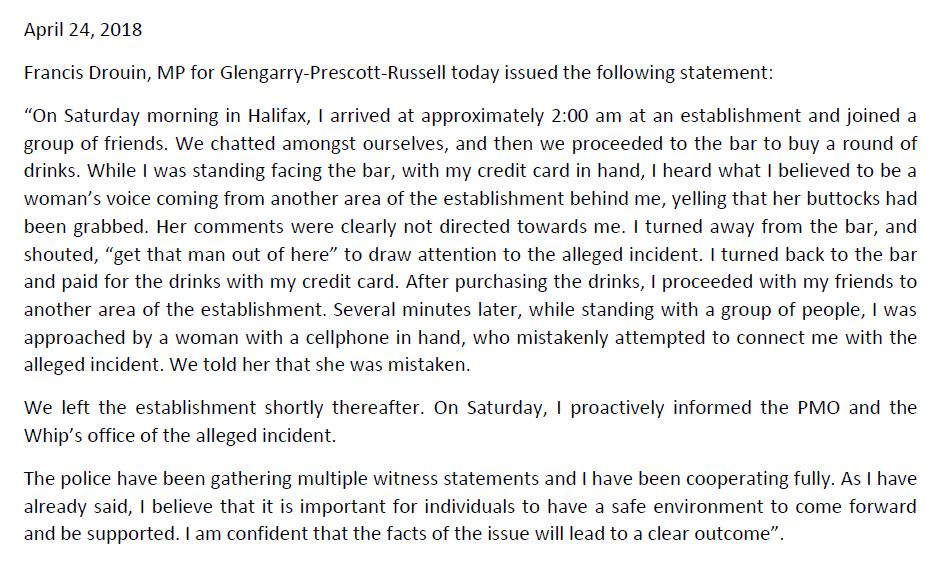 He doesn't want to be accused of misogyny to boot.

How does denying a charge and calling your accuser a liar make you a misogynist?

there is NO such a thing as an actress.