Blackleaf
#1 Aug 2nd, 2013
The British government is trying to stop US singer Kelly Clarkson taking a rare turquoise and gold ring once owned by Jane Austen out of the country.

The 2002 winner of the American Idol TV show bought the jewellery at auction last year for more than £150,000.

But Culture minister Ed Vaizey has put a temporary export bar on it and has appealed for UK buyers to come forward.

The ring is one of only three pieces of jewellery known to have belonged to the Pride and Prejudice author.

Mr Vaizey said he wanted the "national treasure" to be "saved for the nation".

The ring comes with papers documenting its history within the family of Jane Austen (1775 - 1817) who lived most of her life in Hampshire and is one of English literature's most celebrated authors. 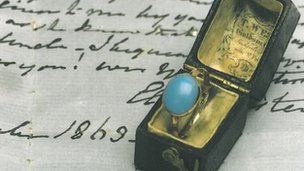 The £152,450 ring is one of only three items of jewellery known to have belonged to Jane Austen

The ring passed first to her sister Cassandra, who then gave it to her sister-in-law Eleanor Austen on her engagement to Jane and Cassandra's brother, the Reverend Henry Thomas Austen.

It had remained in the family until Clarkson, who grew up in Texas, bought it at auction.

If a UK institution or private buyer does not come forward by the deadline then the export licence for the ring will be granted.

But the deadline can be extended to 30 December if proof emerges of "a serious intention to raise funds" to match the six-figure price tag.

Mr Vaizey said: "Jane Austen's modest lifestyle and her early death mean that objects associated with her of any kind are extremely rare, so I hope that a UK buyer comes forward so this simple but elegant ring can be saved for the nation." Jane Austen is appearing on the back of the new £10 note, replacing Charles Darwin