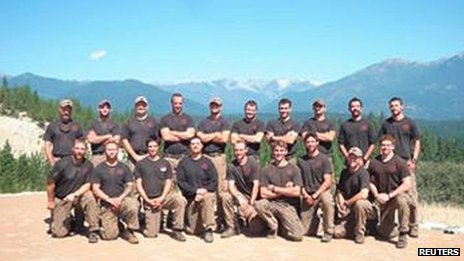 An Arizona town is mourning 19 firefighters killed on Sunday battling a ferocious wildfire about 80 miles (130km) north-west of Phoenix.

Residents of Prescott, where the crew was based, said they were numb and shaken by the loss of firefighters from an elite "hotshots" wildfire unit.

President Barack Obama said he was "heartbroken" and called the deceased firefighters "heroes".

It is the highest death toll for a fire crew in a single incident since 9/11.

The fire, which remains entirely uncontained, was sparked by lightning on Friday and has spread rapidly amid high heat, low humidity and strong winds. It has grown to 8,000 acres (3,200 ha), destroyed about 200 homes and forced the evacuation of hundreds of residents.

In Tanzania on Monday, Mr Obama said Americans' thoughts and prayers were with the firefighters' families.

"This is one more reminder of the fact that our first responders, they put their lives on the line every single day," Mr Obama said.
'It's my community'

As the sun rose in the smoke-clouded sky on Monday, residents of Prescott, Arizona, placed flowers and signs on a fence near the fire station.

"I had to come here," Toby Smith said. "This is my community. This is my family and I felt the immediate need when I heard the news to get up, to come down here to see what I can do no matter what it is."

Orya Salverg said she was leaving flowers in tribute for everything the fire crew had done.

"They go all over the country trying to save people's lives. I knew some of these people... it's the least I could do."

The dead firefighters were part of an elite unit called the Granite Mountain Hotshots, and had battled other wildfires in New Mexico and Arizona in recent weeks, officials say.

A 20th member of the team - the only one to survive - was elsewhere at the time.

As they became surrounded by flames, the firefighters were forced to take shelter in emergency tent-like structures, said Prescott Fire Chief Dan Fraijo.

"One of the last fail-safe methods a firefighter can do is literally to dig as much as they can down and cover themselves with a protective fire-resistant material, with the hope that the fire will burn over the top of them and they can survive it," he said.

"Under certain conditions there's usually only sometimes a 50% chance that they survive. It's an extreme measure that's taken under the absolute worst conditions."

The 19 bodies were retrieved from the scene on Monday and were transported to Maricopa County, seat of Arizona's largest city, Phoenix, for an examination.
Continue reading the main story
Start Quote

I was resolved to the fact I wasn't going to survive

Life as a 'hotshot' firefighter

The tragedy is the worst from a wildfire since 1933, when at least 25 firemen died battling a fire in Griffith Park, Los Angeles.

Arizona Governor Jan Brewer said the dead were "brave men who gave their lives in defence of friends, neighbours and perfect strangers".

The fire chief said the hotshots were "dedicated, hardworking, well-trained and experienced people".

Some 400 firefighters are still battling the fast-moving wildfire. At least 18 hotshot crews have been deployed to the fire.

In recent days, dozens of people across western US states have been treated for exhaustion and dehydration, as a heat wave continues.

Temperatures in some areas were expected to reach 54C (130F), close to the world's all-time high recorded 100 years ago in California's Death Valley. 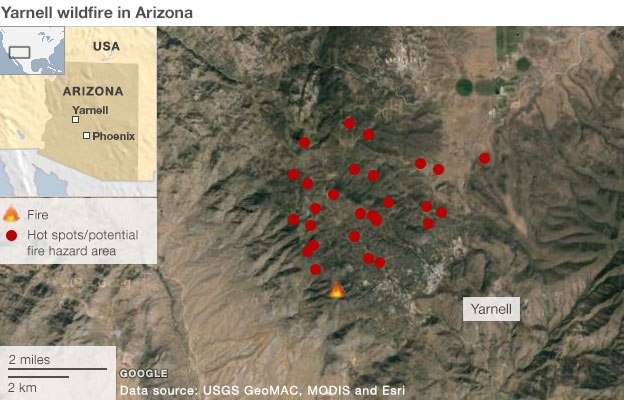 Feel so sorry for these individuals and their families.. God be with them.

Jul 1st, 2013
Sad. All the years I was fighting, I never actually personally knew anyone that died in a fire. Quite a few injuries, though. It's immensely dangerous work.
BTW, it doesn't take wind to spread a wildfire. All it takes it one pitchy tree to ignite and the heat from it is often enough to make neighboring trees explode into flames. And often enough, fires creep along underground. And if a fire is large enough it can trigger its own weather, including lightning and rain. Large ones like that produce enough wind by themselves to prepare their own paths of destruction if ambient air temps are high. These winds literally suck the moisture out of anything in their path. Braking and bombing are pretty much the only way to deal with them in this case.

Jul 1st, 2013
Nuts. They are predictable. They want food and air. That's it in a nutshell.

Jul 1st, 2013
What a tragedy, my thoughts and prayers are with the families and their co-firefighters.

Jul 1st, 2013
RIP and may god help the one survivor, I can't even imagine how one would live with that kind of survivor guilt that is so common in these situations

Hmmm... what do you think? Insensitive?

When I look at that photo the word 'poignant' comes to mind, not insensitive. But I think when one is dealing with a personal loss there is this instinct that comes up in us about what's private and what's public, almost like the fight or flight response in a sense. We just don't ever know which response is going to be evoked nor by what. I'm sorry that some family members of those lost feel it should have been kept private but I do think that those that serve the public in the way that firefighters do are in a way an extended part of all our families.

Jul 6th, 2013
Right... that is what I thought. Poignant. Some pictures are meant to be shown but I can see if some family members did not want it to be shown.