Londoners' tormented skeletons give up secrets from the grave

Blackleaf
#1 Jul 25th, 2008
Due to the high rate of disease, insanitation, high violent crime and, from the 18th Century until the 1850s, 250 capital offences, Britain, and London especially, was often a dangerous place to live, with a much lower life expectancy than it is today.

Now, a new exhibition displays skeletons of Londoners who died centuries ago.

These people, especially those who died in the 1700s and early 1800s, were lucky in death for one reason at least: their remains weren't snatched by the Bodysnatchers, the people who made a macabre living by digging up the corpses of the deceased from graveyards and selling them to surgeons, and who were prevalent in Britain until around the 1850s....


They might look like a heap of bones but each one of these skeletons - all hundreds of years old and on show in a new exhibition - has a poignant tale to tell. From the infant smallpox victim and the pregnant woman to the gout-afflicted pipe-smoker, Joanna Moorhead uncovers their stories.

Skeletons: Londons Buried Bones is at the Wellcome Collection until September 28 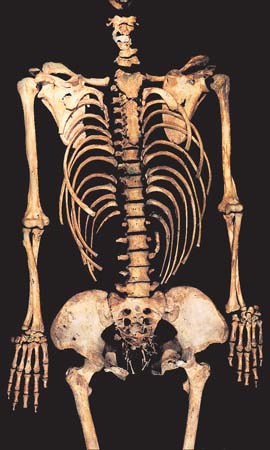 The mother-to-be: She lived somewhere between 1700 and 1850, and was carrying what was almost certainly her first baby when she died, just 22 weeks into her pregnancy. The foetal skeleton is intact - one of the youngest skeletons ever recovered in British archaeology. The womans hip size reveals she probably hadnt given birth previously. Since her pregnancy was only halfway through, its more likely she died of an infection than as a result of birth 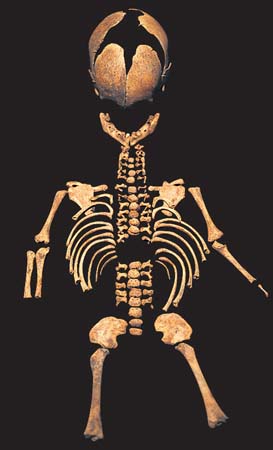 The baby: This child was between six and nine months when he or she died of smallpox, a condition common in the 17th and 18th centuries. Smallpox rarely affected the skeleton, but occasionally there is damage to the elbow joint, as with this baby. Although the spores found in bones of smallpox victims are very unlikely to be infectious, the remote risk of live spores surviving in soft tissue means lead-lined coffins are not opened 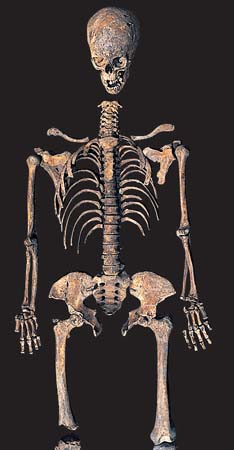 The prostitute: The numerous tragedies of this young womans life  she died at around 20 in the 17th or 18th century  are etched into her bones and teeth. Osteologists have discovered that the formation of her tooth enamel has been interrupted, which is a result of extreme childhood stress. She almost certainly went into prostitution (her bones were discovered in an unconsecrated burial ground reserved for single women, a euphemism for prostitutes) and contracted syphilis

The pipe smoker: Even 300 years after he lived, this mans remains reveal not only that he was a smoker, but that he loved his pipe and was rarely without it. There is a hole through his teeth at the front of his skull caused by his clay pipe. The fact the hole is so pronounced shows he must have been a chain smoker - not altogether surprising considering he lived at a time when smoking was very popular. His left big-toe joint is swollen, almost certainly a result of gout

The child: Found in east London, this child lived and died during the 15th century. Child skeletons are easier to date than adults, but before puberty its harder to tell whether a child was male or female. Whats clear is this child had a painful and difficult life, with severe disabilities. He had congenital syphilis, which deformed and crippled him, and also a cleft. But the fact he lived to be as old as 11, at that time, means he must have been extremely well cared for

The foetus: The parents of this child couldnt possibly have known what was wrong with him, or why he died at birth or was stillborn. But 300 years on, pathologists have diagnosed what killed him. He had Langerhans' cell histiocytosis, an extremely rare disease of the immune system. In this boys case, it has attacked his skull, leaving circular lesions. In the 17th century a baby with such a complex immunological disorder would almost invariably have died

Alcoholism was a common cause of death in 18th Century London (as it is today), as this street scene painting by William Hogarth in 1751 shows


The skeletons featured in the exhibition were excavated from ten different sites across London, marked on the map below.

GUIDE TO SITES SHOWN ON MAP

(A)
Merton Priory (1117-1390)
Station Road, SW19
Merton Priory, established in 1117, was home to an Augustinian order.
Excavations in the 1970s and 1980s revealed over 700 burials covering the entire period in which the Priory was active. Evidence of both monastic and lay burials was uncovered, reflecting the Augustinian belief in integration with the local community.

(C)
St Bride's Lower Cemetery (1770-1849)
75-82 Farringdon Street, EC4
This cemetery was founded due to overcrowding in the churchyard at nearby St Bride's Church, Fleet Street.
Social status was reflected by the proximity of an individual's burial to the church. The Lower Cemetery revealed a population from a low socioeconomic background, probably from nearby Bridewell workhouse and Fleet prison.

Spitalfields (250-400) (1100-1539)
Spital Square, 280 Bishopsgate, E1 Excavations for a new office building in the late 1990s led to the discovery of more than 10 000 medieval bones from the site of the old St Mary Spital, one of the largest hospitals in England, founded in 1197.
This site was to yield further discoveries - beneath the medieval burials lay a Roman site, situated on the main road north out of the city.

(I)
Cross Bones (1598-1540)
Redcross Way, SE1
This burial ground served the poor of the parish of St Saviour's in Southwark. Originally established in the 17th century as a cemetery for 'single women' (a euphemism for prostitutes), by 1769 it had become a pauper's graveyard.
Skeletons exhumed from the site in 1992 revealed conditions associated with disadvantaged circumstances, such as rickets and syphilis.

(J)
Bermondsey Abbey (1066-1540)
Abbey Street, Long Walk, Southwark SE1
The Abbey of St Saviour in Bermondsey was founded in 1082. A monastic priory, it was home to a community of Cluniac monks.
Despite the emphasis on fasting and abstinence within religious orders, conditions including arthritis and symptoms of obesity were discovered when skeletons were excavated from the burial ground in the 1980s.

Re: Londoners' tormented skeletons give up secrets from the grave

Jul 25th, 2008
Interesting to say the least.... although if someone dug my bones up later after I died, they can expect their arses haunted but good.