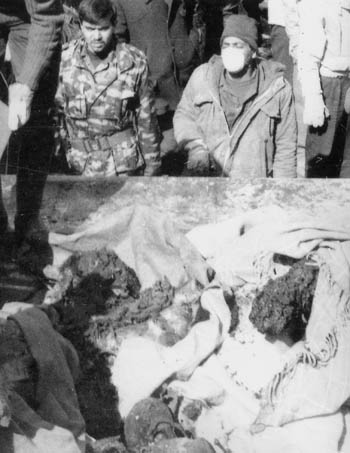 Loading up the charred bodies from the Amiryah terrorist attack

On the morning of February 14, 1991, when I turned the TV on to see the latest lies being told to the public about the U.S. bombing of Iraq, I saw a chaotic situation in Baghdad. The Amiryah bomb shelter had just been struck by two 2,000-pound superbombs. Information was sketchy, but it was evident that many people lost their lives.

The first statement from the U.S. administration was that the U.S. hit an Iraqi command and control post and the dead were military. Shortly after, the cameras showed charred bodies of women and children, so the U.S. story had to be revised. The administration then said that the building was a military target in which Saddam Hussein placed civilians to protect the military personnel.

Remember that the current vice-president of the U.S., Dick Cheney, was the U.S. Secretary of War in 1991. He said, "We blame the Iraqi leadership for putting civilians in harm's way." That statement was not only a lie, but one of the most absurd allegations one could make because it denigrated the hundreds of humans who lost their lives. Cheney, an avid hunter of caged quail, once shot a hunting partner. He can't tell the difference between a small bird and a person, so nothing is new about his lack of brainpower or eyesight.

For a couple of hours, the world was told that the Iraqis led civilians to their deaths by putting them into a military target. Then, the truth began to emerge.

The Amiryah bomb shelter was built as a civilian bomb shelter during the Iran-Iraq War. Even the engineer who designed it came on television and told the world that there was no way it could be a military asset.

After the lies were put to rest, it became evident that the U.S. had mistaken the target as a military venue, or it had deliberately bombed it knowing it was a bomb shelter. To this day, not one U.S. government spokesperson has ever mentioned the truth. In fact, after February 14, 1991, the subject has been left unspoken: even the lies.

Those inside the bomb shelter died horrific deaths. First, a 2,000-pound bomb crashed through the shelter creating a massive tunnel in which the second 2,000-pound bomb then came. Both blew up leaving a huge hole and killing more than 500 people. Only seven humans survived the attack. Those who died actually saw the first bomb and had a few seconds of life left before the second burrowed its way into the shelter. Such an attack transcends the barbarity of a bombing in which the people die immediately.

The lines of burnt dead bodies lining the street presented a horrific scene reminiscent of Hiroshima after it was nuked by the U.S.

This is the 17th anniversary of the bombing of the shelter, yet few words have been written as a reminder of the horrific act. Before March 2003, at least Iraq commemorated the event and remembered the dead. The stooges in power today don't want to remind the world of the lack of caring for human life the U.S. displayed in 1991 in the bombing of Iraq. Most weren't even in the country then. No matter how much they stick their heads in the sand, nothing will never ease the pain of one of the most barbaric terrorist attacks in history. The silence from the U.S. and the Iraqi quislings is deafening.

Re: The Forgotten Terrorist Attack

Feb 15th, 2008
Deny it and hide from it don't say a thing and it will go away. It's the ostrich defensive plan.

Re: The Forgotten Terrorist Attack

The stooges in power today don't want to remind the world of the lack of caring for human life the U.S. displayed in 1991 in the bombing of Iraq.

They're continually reminding us of their lack of caring in Afghanistan everyday with their air strikes and continual listing of civilian casualties which occur almost everytime they use an air strike.

Even when Afghan athorities, including the president of Afghanistan, have repeated requests for the reduction, or the improved planning of air strikes by the US.... the US keeps downplaying the civilian casualties claiming the Taliban were using them as shields or to cover the compounds they were in..... basically stating they had it coming and shouldn't have been there in the first place. Great way to win the people over, that's for sure.

• They leave their villages because of an upcoming battle.
• NATO runs in and pushed the Taliban out, possibly destroying a few homes in the process.
• NATO tells the villagers that the Taliban are gone and they are safe.
• NATO then buggers off because they don't have enough troops for a continual pressence and have to patrol elsewhere.
• The Taliban come back and take over the village and start attacks again.
• Afghans in the village rush off to tell NATO that the Taliban are back and that NATO didn't do their job of protecting them.
• NATO (Or in most cases the US in paticular) call in an air strike and blow the hell out of the Taliban, the homes of the Afghans who call that area home and reported them in the first place, and usually a few of the Afghans along with it all.
• Then the US officials say they shouldn't have been helping the Taliban to begin with, even though they came to the NATO forces for protection from them. Because NATO didn't have enough forces to properly patrol and secure certain areas, the villagers are virtually helpless when the Taliban come strolling back in and therefore have no say.

But that some how becomes the villager's fault.

And I can pretty well say in honesty, I didn't hear much about this super bombing in Iraq.... although I could see it as one more thing fueling the insurgency.
Last edited by Praxius; Feb 15th, 2008 at 01:57 PM..