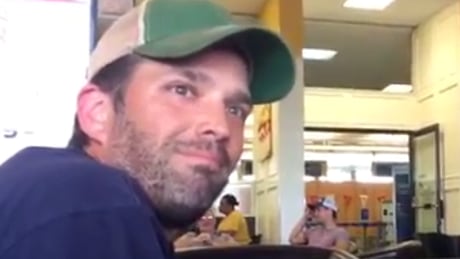 Donald Trump Jr. was in Prince George, B.C., Wednesday afternoon, sitting in the airport restaurant during a layover.

The son of U.S. President Donald Trump told CBC he was on "vacation" and declined to answer further questions.

However, the mayor of Fort Nelson in remote northeast B.C. said he'd been told the president's son had been in his community on his way to the mountains, though he hadn't seen him personally.

"He had no business with the municipality," Mayor Bill Streeper said. "I think on this kind of thing, they do like their quiet time."

The timing of the visit coincides with a hunting trip planned by Trump Jr.'s friend Jason Hairston.

Companion on hunt for stone sheep

In February 2017, Hairston told CNN that he was friends with Trump Jr. and the pair were planning a summer hunting trip.

On July 28, Hairston posted a video to Facebook revealing he was going stone sheep hunting in northeast B.C., though he made no mention of Trump Jr. and the president's son declined to confirm whether he had accompanied Hairston on the trip.

Hairston is a former NFL linebacker and founder of the outdoors company Kuiu, which specializes in ultralight hunting gear and clothing.

The president's son is an established big game enthusiast, attracting controversy in 2012 after photos of him and his brother Eric posing with a dead elephant and other animals were posted online by activists.

He has told followers on Twitter that his favourite North American hunting experience is mountain sheep.

Hunting 'one of the backbones of backcountry B.C.'

Guide Outfitters Association of B.C. vice president Mark Warner said he did not know about the trip, but he welcomes visitors from around the world seeking to enjoy the province's hunting opportunities responsibly.

"That's what makes the backcountry economy go round and round," he said.

"It creates jobs in rural B.C ... it's one of the backbones of backcountry B.C." 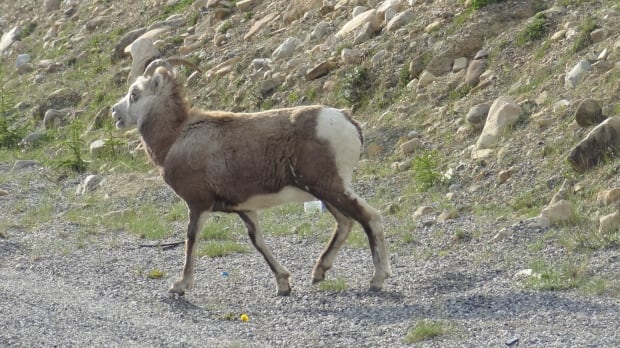 Stone sheep are a blue-listed species in British Columbia, meaning they are of special concern but not deemed to be at risk or endangered and are classified as a "secure" species in the Yukon.

"The species is well looked after," he said.

He also said sheep are among the most challenging hunts available because of their mountain habitat.

"If you can't actually hike up the mountains, you're not going to do a sheep hunt," he said. 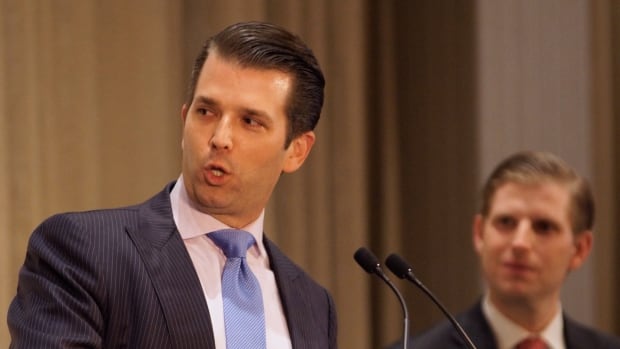 On July 11, Trump Jr. posted a chain of potentially self-incriminating emails about the meeting and continued to tweet prolifically until his account went silent July 30, the date of Hairston's trip to Fort Nelson.

Shortly after being seen in Prince George, Trump Jr.'s account retweeted one of his father's tweets from earlier that day.

...and deluge of unwanted Trumps

Aug 13th, 2017
All money brought into the country is good. Too bad none of the immigrants trudOWE wants to let in have any.


Hey, I've been on vacation for the last two weeks, why aren't you talking about ME?

All money brought into the country is good. Too bad none of the immigrants trudOWE wants to let in have any.

You mean all legal money I hope.

But granted there is no efficient way to trace the source of all money, so uess there is valid reason to suspect, we have no choice but to trust.

What's your problem? Let them pay, they elected him

Eh Trumptard Fukktard whatever, Canadian taxpayers are on the hook for their security

Eh Trumptard Fukktard whatever, Canadian taxpayers are on the hook for their security

Yeah, because idiot progtards show up and act like assholes. Trump Hotel in Vancouver ring any bells? Wouldn't have cost dick if the whiny proggie bytches didn't get themselves all triggered over stupid shit.

And just to show that I'm not a Trumpeteer;
If you think Trump is a great President, you're an idiot. Although he's still better than Trulydopey and here's why;
Trump's ego doesn't like failure. He has to be the best at anything he does. Sometimes he fails, we all do. But that's the thing, at least he tries. Trudeau on the other hand doesn't care about failure because he's never had to actually work for anything. I mean if you don't try, you can't fail, right?
A real leader worries about his own country and its people first. That doesn't preclude not caring about anyone else btw. But when you read many of Trudeau's comments, he has an actual disdain for Canada and Canadians. Everyone else comes first.
Maybe Trudeau should export his idea for canoe sheds instead of all our tax dollars. Apparently enough canoe sheds will solve all kinds of problems.

Trump's ego doesn't like failure. He has to be the best at anything he does.

No, he has to be TOLD he's the best at anything he does. He redefines 'best' to fit whatever he manages to do himself.


If you want an insight into Trump's character, and those like him, read the biography of Armand Hammer. "The Dark Side of Power: The Real Armand Hammer" by Carl Blumay.

Trump's ego doesn't like failure. He has to be the best at anything he does. Sometimes he fails, we all do. But that's the thing, at least he tries.

And blames his failures on any and everything in the world except himself.

Trudeau on the other hand doesn't care about failure because he's never had to actually work for anything.

And you think Trump has?

And you think Trump has?

He spent years learning how to be a toupé whisperer and wrangler down in Mar a Lago.