Edward R Murrow is one

Edward R. Murrow - Wikipedia, the free encyclopedia
Edward R. Murrow KBE (born Egbert Roscoe Murrow;[1] April 25, 1908  April 27, 1965) was an American broadcast journalist. He first came to prominence with a series of radio news broadcasts during World War II, which were followed by millions of listeners in the United States.

A pioneer of television news broadcasting, Murrow produced a series of TV news reports that helped lead to the censure of Senator Joseph McCarthy.

Nov 15th, 2014
Excellent! Didn't know he was still remembered. There is a high school in Brooklyn named for him. He was a true journalistic pro. His reports from the battle zone during WW II were extraordinary.

If you can find it, try watching his interview with Harpo Marx - it was VERY different.


This is London - extraordinary journalism:


Murrow, the Blitz and the Race to War : NPR

Paul Harvey " Policeman " One of His Best Narrations - YouTube

Richard C. Hottelet, the last of the original "Murrow's Boys," the pioneering group of wartime journalists hired by CBS radio newsman Edward R. Murrow, has died. He was 97.

Hottelet was a foreign correspondent for the United Press in Berlin at the start of World War II  and even spent several months in a Nazi prison  before joining CBS in London in 1944.

He reported from many battlefronts, and went on to become CBS' correspondent for the United Nations, an assignment he began in 1960. He resigned in 1985 to join the U.S. Mission to the U.N. as its public affairs counselor, leaving that post in 1987 over differences with Ambassador Vernon A. Walters.

"Either you're in sync or not, and we were not that much," he said.

The legendary "Murrow's Boys" were recruited by Murrow, then London-based director of CBS' European bureau, starting in 1937 and continuing through the war years. They included such eminent figures as Eric Sevareid, William Shirer, Charles Collingwood, Larry LeSueur, Winston Burdette and Howard K. Smith.

"It was not our job to inspire people, to educate, to move them," Hottelet recalled in an interview with The Hartford Courant in 2003. "It was our job to tell them what was going on."

Decades before journalists were embedded in military operations, Hottelet moved forward with troops and circled back to file his reports. He flew with the U.S. Air Force before the D-Day operation in 1944 and was in an Air Force bomber that attacked Utah Beach just minutes before the start of the Allied invasion.

Toward the end of the war, when Allied troops were fast approaching the Russians, smashing through Nazi Germany in April 1945, Hottelet said he did not have access to a transmitter for the historic occasion.

"So I'd send people back with typed copy to cable to New York," he said.

From the start, Murrow insisted on good reporters, not professional announcers, and they became legends to radio audiences for their bravery and eloquence.

"Radio was an extension of the printing press for them. Because they were live, they wrote first and spoke afterwards. These guys were writers above all," Stanley Cloud, co-author of the book "The Murrow Boys," said in a 1996 Associated Press interview.

"Nowadays, facts are drizzled over people in a news cycle that's 24 hours a day," he told the Courant. "To appeal to more people, news sometimes goes down to the lowest common denominator. Print isn't so bad, but they do tend to featurize a good deal. People don't feel stimulated to respond in terms of their own interest or what is said."

He remained active even in recent years, guest lecturing every semester at George Washington University journalism classes, according to a 2008 news release from the university.

Following an assignment in Moscow in 1946 where he reported on Soviet leader Josef Stalin's dismantling of the Soviet Union's alliance with the West, Hottelet returned to the United States where he stayed until 1951.

He then traveled to West Germany, reporting on the growth of democracy and the beginning of the Cold War that divided Eastern and Western Europe.

Hottelet had his own daily television news broadcast, "Richard C. Hottelet With the News," a 15-minute morning program in 1959, and a regular weekend radio broadcast.

He was named U.N. correspondent in 1960 and that fall reported on the celebrated when Soviet Premier Nikita Khrushchev, during a visit to the United Nations, banged his shoe on his desk.

For the following 25 years, Hottelet appeared regularly on CBS News programs such as the "CBS Evening News" and "Face the Nation," covering the diplomatic aspects of conflicts in Cuba, Congo, Bangladesh, Vietnam and the American hostage crisis in Iran.

Hottelet, born in New York in 1917, first traveled to Germany as a student in 1937 and joined the United Press bureau in Berlin.

Caught up in World War II, he survived four months in a Nazi prison in 1941 following his arrest by the Gestapo on false charges of espionage. He was released after he was exchanged for a Nazi newsman held by the United States.

After a stint in the U.S. Office of War Information in Washington and London, he was hired by CBS.

"It was a very interesting and important story. That was our approach to it," he told the Courant. "We were accredited war correspondents. That was it. We were serious people at a serious job. We were out in the field, flying, on the front lines, getting shot at  along with 10,000 other people."

In December 1944, he was the first to report the German counteroffensive that became the Battle of the Bulge.

Hottelet recalled conditions for radio reporters as primitive and undependable and said they did not consider themselves broadcast innovators.

"The notion of getting to New York in two minutes on a satellite phone was inconceivable to us," he told the Los Angeles Times in 2003. The radio circuit was "a sometimes thing" occasionally blocked by sunspots or interference, he said.

"More often than not, you turned up at a wireless studio with a script and were not able to hear New York," he said. "So I would just start in blind, in the hope they were hearing me. It often worked, astonishingly enough."

He also recalled a rudimentary radio studio at a press camp in Belgium: "a little room in a nondescript building, with blankets around the wall so you wouldn't sound hollow."

His wife, Ann Delafield Hottelet, died in 2013. He is survived by four grandchildren and two great-grandchildren. 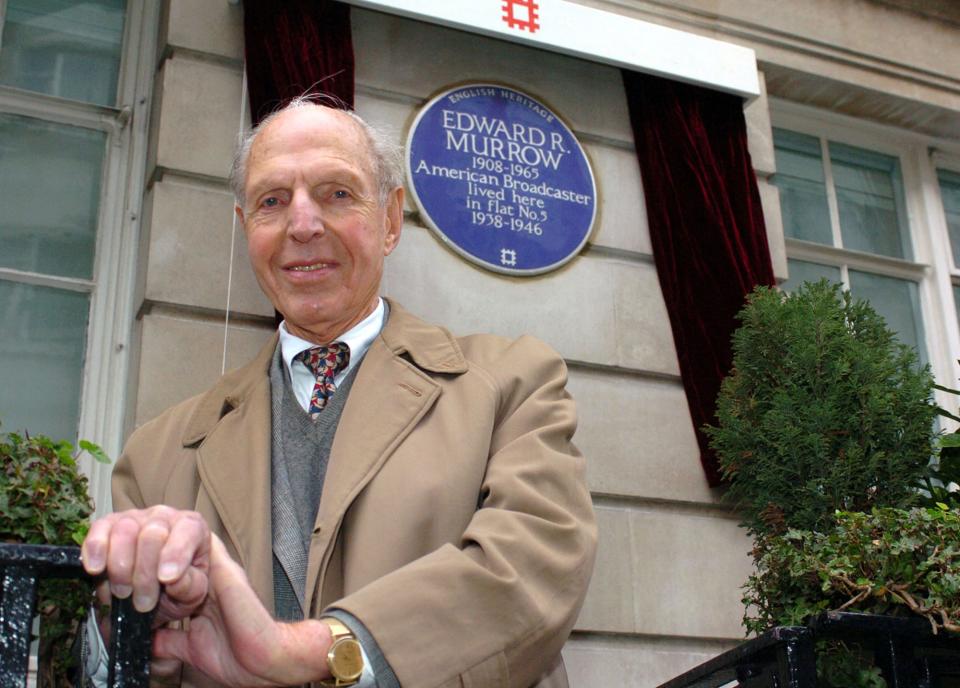 Journalistic professionalism at its finest.