Blackleaf
#1 Oct 22nd, 2006
Matt Lucas, who stars as Davydd - the "Only Gay In The Village" - in BBC comedy series Little Britain is now starring as Toad in the BBC's new production of Wind in the Willows to be screened on Boxing Day (26th December).

The Wind in the Willows - popular with British children - is a classic of children's literature written in 1908 by Kenneth Grahame . The story is alternately slow-moving and fast-paced, focusing on three animal characters in a bucolic version of England . The book is notable for its mixture of mysticism, adventure, morality and camaraderie. It gives as much pleasure to adult readers as to children, although for rather different reasons. 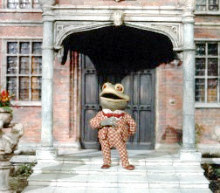 There is no need for green make-up. With his bald head and rotund figure, Matt Lucas requires only a flamboyant tweed suit to turn him into a convincing Mr Toad.

The Little Britain comedian has just finished filming a spectacular £5million star-studded production of The Wind In The Willows, to be screened on the BBC on Boxing Day.

In it Lucas, pictured here for the first time in the role, swaps the latex leotards he wears as Dafydd, The Only Gay In The Village, for some equally bizarre Victorian outfits.

They include a green-checked three-piece suit with extraordinary blue piping, a red tartan outfit with plus-four breeches and a set of pink and green striped overalls.

In one scene, Toad is even reminiscent of Lucas's other outrageously camp character, Florence the moustachioed transvestite.

Bucolic
The arrogant amphibian escapes from jail disguised as a washerwoman in a long dress, shawl and floral bonnet that distinctly resemble those worn by his 'laydee' in Little Britain.

The screenplay, adapted from Kenneth Grahame's book, was written by Lee Hall, best known for Billy Elliot. But purists may be upset that this most bucolic of English tales was in fact filmed in the ancient forests of Romania.