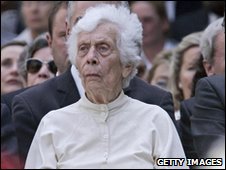 A prominent member of Germany's anti-Nazi resistance during World War II has died, aged 98, at her home in the US.
Freya von Moltke, who had lived in Vermont since 1960, died last Friday after a viral infection, her son said.
She had belonged to a group of aristocrats, clerics and diplomats who backed a failed attempt to kill Hitler with a bomb in 1944.
The group, known as the Kreisau Circle, was led by her husband, Helmuth, who was later executed for his activities.
She told an interviewer in 2002: "To object and then to stand for what you believe in is one of the most important human activities to this day."
Resistance meetings
Von Moltke was born Freya Deichmann in Cologne in 1911 and met her husband when she was 18.
Both she and Helmuth received law degrees and were married in 1931.
They were opponents of Hitler from the start of the Nazi regime and assisted Jews and other victims of Nazism through Helmut's international law practice in Berlin.
In 1942 and 1943, Von Moltke hosted meetings at the family estate, Kreisau in Silesia, at which the resistance group discussed plans for the democratic Germany they hoped would follow the collapse of Nazism.
The Kreisau Circle supported the failed attempt on Hitler's life in July 1944.
Treason
Von Moltke said later that she had fully supported her husband: "I never advised him to stop, but rather encouraged him, because I was convinced that that was the right way for him to fulfil his life."
Helmuth von Moltke was executed for treason in January 1945.
After the war, Von Moltke and her two sons escaped to South Africa where she worked as a social worker.
She returned to Germany in 1956 where she began her work in publicising the Kreisau Circle.
She settled in Vermont in 1960, where she published several books about resistance to the Nazis during the war.
The former family estate in Silesia, located in current-day Poland, is now used as a centre for reconciliation between Germany and Poland and as a meeting place to promote European integration.

Re: German anti-Nazi leader Freya von Moltke dies in US, 98

The widow of a German lawyer executed after the failed plot to assassinate Hitler, Freya von Moltke became an outspoken advocate of German democracy.
Ms. von Moltke, who died Jan. 1 at age 98, spent World War II tending to the farm at her husband's family estate in Kreisau, Germany, which became the meeting place for a group who opposed Nazism and plotted to re-establish German democracy.
But after the July 20, 1944, assassination attempt in which Hitler was injured by a bomb, the so-called Kreisau Circle was discovered. Ms. von Moltke's husband, Helmuth von Moltke, an expert in international law and counselor to the German Army's high command, was convicted of treason by a Gestapo "people's court" and hanged in early 1945. Ironically, he had opposed Hitler's assassination in part for moral reasons, says their son Helmuth.
View Full Image 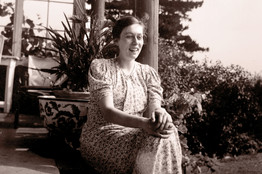 In the aftermath of the war, Ms. von Moltke and her two sons were rescued by British troops and settled in South Africa. Ms. von Moltke undertook a U.S. speaking tour in which she elucidated her vision of a peaceful Germany. The 1949 visit inspired Eleanor Roosevelt to write in her newspaper column that Ms. Moltke "will do almost anything to feel that the land where her children should live has a chance of being a democratic, peace-loving country."
But Ms. von Moltke's dreams ran up against the South African apartheid state that instituted racial laws shortly after she arrived in 1947. In 1956, weeks after her oldest son graduated from secondary school, she moved the family back to Germany and then to the U.S. She settled in Norwich, Vt., where she lived with Eugen Rosenstock-Huessy, a German-Jewish philosopher who taught at Dartmouth.
Born into a prosperous Cologne banking family, Ms. von Moltke studied at the University of Bonn and at age 20 was married to Helmuth von Moltke. They moved to Berlin, where he completed his legal studies.
Ms. von Moltke also earned a doctorate in law, but moved to the family estate at Kreisau after she had children. Her husband's international legal practice burgeoned and he was accepted as a British barrister, as he worked behind the scenes to oppose the Nazis. The Kreisau Circle met at the von Moltke estate several times during the war years and made plans for German democracy, which they assumed would follow the failure of the Nazi regime.
While Mr. von Moltke was in Berlin, the couple exchanged daily letters in which he asked after the sugar-beet harvest and questioned the wisdom of keeping a pair of ducks. He also expounded on his vision of a new Germany, and on the inhuman turn in German politics.
"How can anyone who knows these things still walk around free?" he wrote in one letter after seeing a German policeman kick a Jew. In another, he wrote of "a blood-guilt that cannot be atoned for in our lifetime."
Because their contents were potentially incriminating, Ms. von Moltke kept her husband's letters hidden in beehives on the estate. "Even the SS weren't brave enough to look there," she told Britain's Guardian newspaper in 1972. A selection of the letters was published in English in 1990 as "Letters to Freya."
After the fall of the Berlin Wall and Germany's reunification, Ms. von Moltke and her wartime experiences became better known in Germany, and politicians, including Chancellor Gerhard Schroeder and Chancellor Angela Merkel, consulted her.
But she initially turned down an invitation in 1989 from Chancellor Helmut Kohl to accompany him on a visit to the Kreisau estate -- now a part of Poland after borders were redrawn -- insisting that the invitation must come from Poland to honor postwar reconciliation. The Polish and German governments later joined to finance a reconstruction of the estate as the Freya von Moltke Foundation, which opened in 1994 to foster international discussion on peace and democracy.
In recent years, Ms. von Moltke said that she came to believe that Hitler should have been assassinated, and remained proud of her husband's wartime work.
"Even though we had no success," she told the congregation at a Berlin church in 2004, "and even though we were weak, we kept European humanity alive in Germany."