Blackleaf
+1
#1  Top Rated Post Nov 7th, 2010
A winning design has been chosen for the memorial to honour Britain's most iconic aircraft and the most beautiful fighter plane to have ever flown our planet's skies - the Spitfire.

The design, by London-based Australian architect Nick Hancock, was chosen from hundreds of entries and is of a Spitfire soaring majestically into the sky. Nick has also helped to design the new World Trade Centre and a stadium grandstand in South Africa for this year's World Cup.

The Aussie said: "I've never had an opportunity to design something as special as this – the Spitfire is a true reflection of British ingenuity and tenacity."

The memorial will be on permanent display in Southampton, the city on the English Channel coast where the first Spitfires were designed and built (on a clear day maybe the French will see it).

It will stand at 131 feet tall, almost as high as Nelson's Column, and will stand in the Hampshire city's Trafalgar docks. It promises to provide visitors, both from land and sea, with a striking welcome.

The Spitfire was crucial in helping the RAF win the Battle of Britain against the Luftwaffe in 1940. It was designed by R.J. Mitchell, first flew in March 1936 and entered service with the RAF in 1938. In total, 20,351 of the aircraft were built and was the only Allied fighter aircraft in production all through the war.

The last time Spitfires were used in battle was in January 1951 when Malaya (now Malaysia) rose up against the British Empire.

Mr Hancock, 36, who has a studio in north London, said he was 'over the moon' after learning his concept will be used for a stunning new landmark on Southampton's waterfront.

A Spitfire soaring majestically into the sky has been selected as the winning design for a national memorial to the wartime aircraft.

The design by Nick Hancock, an architect, was chosen from hundreds of entries in a public contest, backed by The Sunday Telegraph, to create a permanent tribute to the Spitfire in Southampton, the city where it was designed and first built.

Mr Hancock, 36, who has a studio in north London, said he was "over the moon" after learning his concept will be used for a stunning new landmark on the city's waterfront.

His winning entry features a polished steel Spitfire appearing to rise high above the coastline, supported by a steel mast attached to its tail. It was picked from a shortlist of seven by the Spitfire Tribute Foundation, which is organising the memorial.

"I've never had an opportunity to design something as special as this – the Spitfire is a true reflection of British ingenuity and tenacity," said the Australian, whose previous projects have included working for Richard Rogers Partnership to design one of the new towers at the World Trade Centre site in New York, and, more recently, designing a stadium grandstand for the football World Cup in South Africa.

"The challenge was to come up with a design that embodied the movement and flight of what is an incredibly beautiful aircraft. It needed to feel as free as possible."

Along with creating a lasting memorial to an icon he has long viewed with wonder, Mr Hancock will be rewarded with a flight in a two-seater Spitfire, originally designed by R.J. Mitchell. 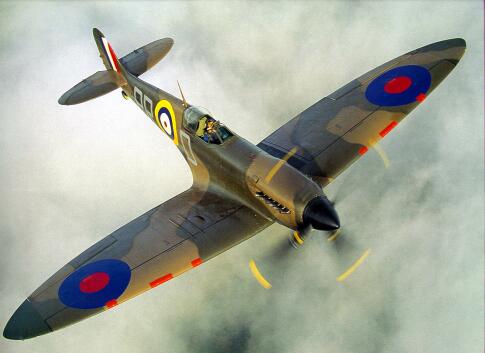 The Spitfire helped Britain to inflict defeat on Germany in 1940. At the time, the British Empire was the only power taking on Germany.

"That is one of my childhood dreams. I used to build model aircraft and one of the first I ever made was a Mk5 Spitfire. But it always frustrated me that they came on a mobile stand. I used to pull them apart and use coathangers to make them look as if they were really flying.

"To now be given the opportunity to create a monument for the Spitfire is mind-blowing."

Sited at the water's edge at the city's Trafalgar dock, the design envisages a structure 131 feet (40 metres) tall, twice the height of the Angel of the North, that promises to provide visitors, both from land and sea, with a striking welcome.

Readers of The Sunday Telegraph have contributed nearly £10,000 towards the project. That money will now be used to help take the successful design through a series of development phases to the point of construction.

Meanwhile, organisers will run a campaign for sponsorship to fund the monument, which is expected to cost £2 million.

John Hannides, a Southampton councillor and chairman of the Spitfire Tribute Foundation, said Mr Hancock's design was picked for its feasibility as an actual monument as well as its aesthetic qualities.

"We were very impressed with the designs we received and choosing a winner was difficult. It was close but in the end we came to the conclusion that Nick Hancock's design was the best concept," he said.

He added that the foundation was "extremely grateful" for the "fantastic support" of readers of The Sunday Telegraph.

"With the design in place, we will now be able to target corporate and grant-making bodies and trusts. The Spitfire evokes much more than just the Second World War.

"It's about courage, innovation, hope and freedom. These are things as relevant today, and for future generations, as they were in the past."

Squadron Leader Alan Jones, director of the city's Solent Sky museum and a member of the foundation, said Mr Hancock was chosen for his "clean, elegant design".

"The great difficulty with putting it on a stand is that you have to fix it somewhere. The winning design has the mast attached narrowly at the tail of the aircraft, so it doesn't detract from Mitchell's original sculpture."

The single-engine aircraft was designed in 1936 at the city's Supermarine seaplane factory as the Air Ministry sought planes for the looming conflict with Germany.

The Spitfire played a critical role in the Battle of Britain in 1940, during which the RAF defeated attempts by the German Luftwaffe to gain air superiority, and helped to frustrate Adolf Hitler's plans for an invasion of Britain.

The competition's runner-up was James Burnell, 64, an artist from Bournemouth, Dorset, who submitted a design made from composite materials, such as glass fibre and resin, supported on a steel column.

Nov 10th, 2010
I apologise first-off for registering just for this matter, but it's an important one. I refer to the recent announcement in many industry publications and in the national press regarding Nick Hancock's winning Spitfire Monument.

I am Jonathan Lucas, one of the final six shortlisted entrants (note six, not seven) to the Spitfire Memorial Tribute competition. Despite the high profile announcement of what looks on the face of it to be a perfectly good design solution, all is not as it seems I'm afraid. Mr Hancock was NOT one of the final six shortlisted and his design was announced following a second stage where the entrants were invited to supply further information to support their entries. The first any of those shortlisted heard that we had been leapfrogged, and indeed that the winner was not one of us, was in the Sunday Telegraph.

I should point out that we finalists would have been happy for any of our structures to have been victorious following a fair and correct procedure in deciding the winner. However, that did not happen.

It is crucial for any future designers & architects submitting creative ideas to competitions to be assured that their intellectual investment is not compromised and that they will not be attempting to win an unwinnable prize. The fact remains that the organisers of this competition appear to have breached their own Ts & Cs and left an extremely murky con trail in their wake to eagerly promote their mysterious seventh finalist and victor. That PR machine has been relentless and a seemingly concerted effort to suppress any negative responses. As a collective, we have requested a response from Councillor Hannides to explain what happened, but with no response.

There are no sour grapes, just a collective deep sense of confusion, deceit and disappointment at the poor treatment we have received thus far. There has been no official word from the Spitfire Tribute Foundation to any of the finalists, yet they speak openly to Daily Echo, Telegraph and BBC journalists to bolster the credibility of the new design. This I believe speaks volumes in itself.

My entry (where the other shortlisted entries can also be viewed) as well as links to the announcement in the press: Spitfire Tribute submissions gallery I would be very keen to hear any views you have on this.