Blackleaf
#1 Jul 29th, 2009
The next decade is looking to be a golden one for British sport.

On top of that, England is also bidding to host the 2018 Football World Cup.

And yesterday, England also won the bids to host the 2013 Rugby League World Cup and the 2015 Rugby Union World Cup.

So, if England wins the bid to host the 2018 Football World Cup, what a decade it will be for British sport.

The Rugby League World Cup should have been held in 2012, but because England won the bid it will be moved to 2013 to avoid a clash with the London Olympics.

But the Rugby Union World Cup is the one that has been getting all the headlines. England will host it for the second time in 2015, having previously hosted it in 1991 when Australia beat England in the Final. England got revenge by beating Australia in the 2003 World Cup Final in Australia, but then narrowly lost 15-6 to South Africa in the 2007 World Cup Final after having a try wrongly disallowed.

The Rugby Union World Cup, held since 1987, is the world's third-largest sporting event after the Olympics and the Football World Cup. 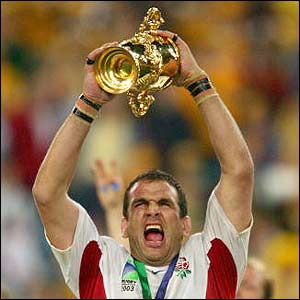 Winners: England win the 2003 Rugby Union World Cup, and will host the 2015 competition


England have fought off rival bids from South Africa and Italy to win the right to stage the 2015 Rugby World Cup.

It will be the second time England have hosted the competition, the last time being in 1991.

The International Rugby Board (IRB) also announced that Japan will be hosts for the event in 2019.

The IRB voted 16-10 in favour of rubber-stamping the recommendation from Rugby World Cup Ltd (RWCL) that England and Japan should be named hosts.

The announcement by IRB chairman Bernard Lapasset had been widely expected after RWCL, the IRB-controlled company that oversees the tournaments, last month endorsed England and Japan as the strongest bidders.

"We have been trusted with making a great competition and providing a great spectacle, and delivering what the IRB needs in terms of host revenue," said Thomas.

"Australia did an immense job [in 2003], France raised the bar [in 2007] and we have got to raise it again. We have got some very iconic stadia and it will be tremendous for world rugby and immense for participation in England."

The RFU says England will lay on the biggest World Cup to date, generating a surplus at least £60m larger than that of the other bids.

Between the event's running dates from 4 September to 17 October it says three million people will watch the games live at stadiums across the country.

The stadia selected are Twickenham, Wembley and the Emirates Stadium in London, Old Trafford in Manchester, Newcastle's St James' Park, Anfield in Liverpool, Elland Road in Leeds, the Ricoh Arena in Coventry, Welford Road in Leicester, Kingsholm in Gloucester and St Mary's Stadium in Southampton.

The only stadium outside England to host matches will be Cardiff's Millennium Stadium, which will stage two quarter-finals and some pool matches.

However, IRB chief executive Mike Miller confirmed England's plan to use the Millennium Stadium must still be ratified by the RWCL board - and that may not happen until next March.

The RFU must make a proposal to the IRB and provide compelling reasons that meet specific criteria that are in the best interests of the game globally for taking matches outside of England.

Japan are in a similar boat after submitting their bid with plans to split a pool between Singapore and Hong Kong, although it is hard to see the IRB dismissing that request given their desire to spread the game through Asia.

Prime Minister Gordon Brown said it was a "fantastic achievement" to win the bid and congratulated the RFU on their success.

"I'm sure the whole country will want to play their part in making this the most memorable of Rugby World Cups," he added.

The event will form part of what Brown has labelled a "golden decade" of sport in the UK.

"The Rugby World Cup is yet another tremendous event to add to the country's decade of sport and another chance to show our nation's passion for sport and what world class facilities we have to offer. I'm sure it will be a tournament to remember," said Brown.

Former England international Will Greenwood, a World Cup winner in 2003, says he hopes the event will leave a lasting legacy not only in this country but across the world

"I've seen the ability of rugby to change lives, both on an individual level and on a community basis and part of the RFU pledge is all surplus money will go back into grassroots both on a domestic level and a global scale.

"We now have an opportunity to go round the country and spread the gospel of rugby, grow the support and player base and spread the values and beliefs of rugby such as teamwork, discipline, trust, friendship and second chances."

Ex-England captain Lawrence Dallaglio, also part of the victorious 2003 side, said: "The world's best players will now have a chance to play in some of the world's best stadia and supporters can look forward to a feast of rugby. It's almost enough to bring me out of retirement!"

"We have been there before [to France for the 2007 RWC], we know how they are feeling," said Thomas.

South Africa, in particular, were upset at losing out on the recommendation of the RWCL, and had been lobbying hard ahead of Tuesday's meeting.

They had pressed home the fact they had secured government support totalling £130m - £50m more than the tournament fee - compared to the £25m Westminster has made available to the RFU.

"We believe that we presented an extremely credible bid based on the fantastic infrastructure that our country will soon have (as a result of upgrades to prepare for the 2010 football World Cup).

"Even if we're successful the next time around, 28 years is too long to wait for a country with such strong rugby passions."

As well as bringing an estimated £2.1bn in economic benefits to the British economy, England's package is projected to generate £300m for the IRB, who rely on the tournament for 98% of their income.

On top of the £80m tournament fee, the UK market would attract a further £220m in commercial returns from broadcasting, sponsorship and merchandising, which is understood to be at least 20% more than the bids from either South Africa or Italy. 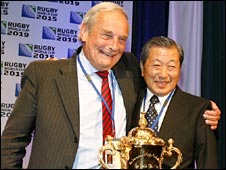 With the 2011 tournament in New Zealand predicted to not bring in bumper revenues the RFU's financial power was seen as a way to bolster the IRB's reserves.

The IRB also felt the need to break new ground by taking the 2019 World Cup to Asia after Japan were controversially overlooked for the 2011 tournament.

"The God of rugby smiled on us today," said Japan Rugby Football Union (JRFU) president Yoshiro Mori. "I am filled with emotion to be a part of this historic day for Japan and for rugby around the world.

"Japan has much to offer the rugby World Cup. We have a superb transport system, strong infrastructure and world-class stadiums.

"We are honoured to welcome the global rugby family to our country and for the first time ever to Asia."

Twickenham, in London, is the home of the England rugby union team and has a capacity of 82,000, making it the largest rugby union stadium in Britain and the fifth largest stadium, of any sport, in the whole of Europe 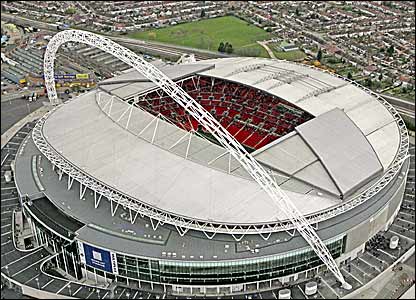 Wembley, in north London, is the second largest sports stadium in Europe, and is the largest stadium in the world with every seat under cover, with a capacity of 90,000. Costing an incredible £800 million, it is the world's most expensive sporting arena.

Old Trafford, home of Manchester United, has a capacity of 76,000, making it England's, and Britain's, second-largest football stadium The Emirates Stadium, in north London, has a capacity of 60,355, making it Britain's 5th largest football stadium.

Coventry City's Ricoh Arena has a capacity of 32,609