Will England rugby stars defend the World Cup in long-johns?

Blackleaf
#1 Sep 24th, 2006
England won the Rugby World Cup in 2003, beating Australia in the Final. But the World Champions may wear LONG-JOHNS in the 2007 World Cup when they defend their World Cup crown.

Will England rugby stars defend the World Cup in long-johns?
By BILL DAY It may look like your grandad's thermal underwear - but this could be the kit Jonny Wilkinson and the rest of England's rugby team wear to defend their World Cup crown next year.

Sportswear giants Nike have been secretly developing the bizarre strip - designed to be impossible for opponents to grab hold of - and have recruited the Royal Marines to help test it.

A few dozen spectators got a sneak preview of the strange designs on a bleak, windswept West Country pitch last week, during a friendly match played under a veil of secrecy.

But for all the supposed advantages of the new kit, the Marines were still thrashed 48-5 by their Plymouth Albion hosts. 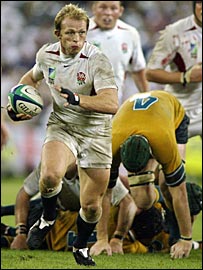 
The match was given no advance publicity and the kit was unmarked, with not even the telltale Nike 'swoosh' logo as a clue. The Marines' dressing room was declared a no-go area and they were under strict orders to say nothing about the strip, which was whisked away after the match.

But the Plymouth players could barely contain their laughter when they saw their hulking opponents run out in what looked like their long-johns.

Plymouth manager Gareth Jones said: "We are told this is the look of the future. We all laughed when we saw it because it is very unusual. But I understand it will soon be worn by major teams and brought on to the general market.

"The idea is that the gear is so tight it's almost impossible to grab your opponent's shirt or shorts. There is a lifting-bone built into the shorts for use at line-outs, but I have never seen lightweight kit like that on a rugby pitch.

"We knew it was a bit special because the Marines were not allowed to keep the kit or say anything about it. There were no Nike distinguishing marks and all we were told by the Marines was that they were helping Nike in a trial. All a bit hush-hush. Unfortunately, we were never given a close-up look at the kit."

It is not the first time Nike has tested kit with Royal Marines, who previously tried out the strip later worn by the French national team.

Nike would only say: "As a company committed to innovation, Nike is always prepared to experiment with new ideas. Whichever kit is used by England in the future you can be sure it will be designed to help the players perform to their maximum."

Former England star Graham Dawe, who now coaches Plymouth's National Division One team, was 'shocked' to see the skin-tight shirts and knee-length leggings, which could be worn at the World Cup in France next September.

He said: "It was more akin to American football, but I can see it has appeal. Everything moves with the times and I can see this on the field sooner rather than later. It's OK having the latest technology, but it's what's inside the kit that counts."

As the Marines discovered when it came to Monday's humiliating scoreline.