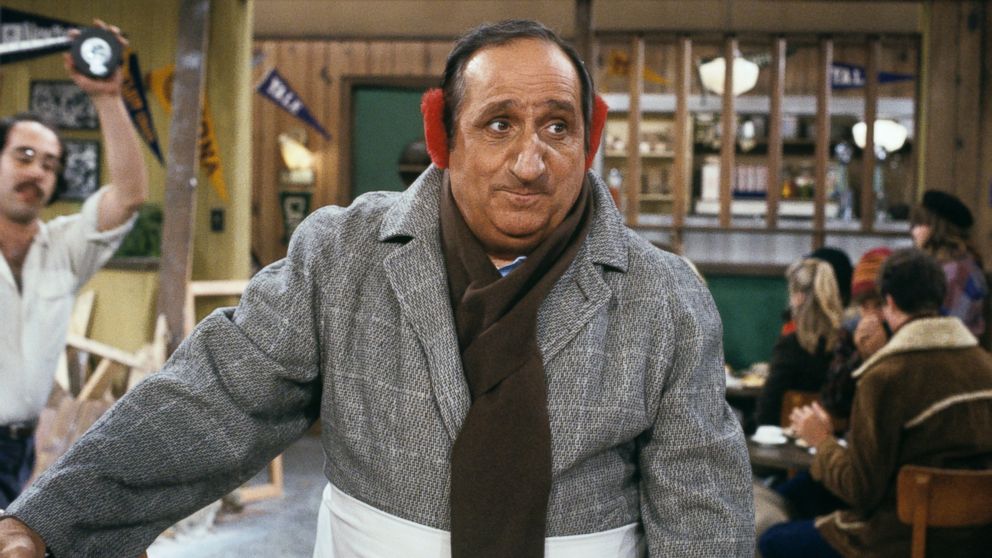 Al Molinaro, an actor who specialized in lovable blue-collar roles and played his Midwestern cadence, penguin-like physique, beaked nose and wayward eyebrows for laughs on the long-running sitcoms The Odd Couple and Happy Days, died Oct. 30 at a hospital in Glendale, California. He was 96.

The cause was complications from an infected gall bladder, said his son, Michael Molinaro.

Molinaro grew up in Kenosha, Wisconsin, and distinguished himself as a public speaker in school. At 21, he moved to southern California at the behest of a hometown friend who insisted he could succeed as a performer.

He left his job as assistant city manager in Kenosha and gradually cobbled together emceeing and other entertainment work, while supporting his family running a collection agency.

I spent 20 years here before I got anything going, Molinaro later said. Youve just got to be lucky and in the right place at the right time.

In his case, his luck began with an improvisation class taught by comic actor Harvey Lembeck. Among the students in the workshop was actress Penny Marshall, and she introduced him to her brother, producer Garry Marshall, who in 1970 was casting for a new sitcom based on the hit Neil Simon play The Odd Couple.

Marshall tapped Molinaro to play the supporting role of Murray, the poker-loving cop. The series ran on ABC from 1970 to 1975 and starred Tony Randall and Jack Klugman as mismatched apartment-mates Felix Unger and Oscar Madison.

In his occasional appearances as Murray, Molinaro made the most of his distinctive features to steal the scene. For one episode, Felix and Oscar find him in a New York park at night, dressed in drag for a special assignment to arrest shady types.

This time of night, Murray explains, the muggers dont get a great selection. Its either me or Kowalski, and hes really let himself go.

In 1976, Marshall called on Molinaro to replace Pat Morita as the owner of Arnolds malt shop, the teen hangout on ABCs Happy Days.

After that sitcom was canceled, Molinaro had roles on fleeting shows in the 1980s and early 1990s such as The Family Man and Step By Step. He also starred in a failed TV pilot called The Ugily Family (1982) as the patriarch of an unattractive clan who is constantly correcting mispronunciations of his surname as ugly.

Molinaro remained a TV presence for decades, but mostly as a pitchman for products such as Mr. Big napkins and paper towels, Cortaid hydrocortisone cream and On-Cor frozen dinners.

The Odd Couple and Happy Days  programs in perennial syndication  made Molinaro known to generations of TV viewers. He tried to capitalize on that popularity by co-founding a chain of diners in the Midwest called Big Als, which went defunct. He also returned as Big Al for a 1994 music video of the song Buddy Holly by the rock band Weezer.

The son of Italian immigrants, Umberto Francesca Molinaro was born in Kenosha on June 24, 1919. Starting in grade school, he went by Albert Francis Molinaro.

His marriage to Jacquelin Martin, with whom he had a son, ended in divorce. In 1981, he married Betty Farrell. Besides his wife, of Glendale, and son, of Encino, California, survivors include a brother and three grandchildren.

In 1990, Molinaro told the Chicago Tribune that Marshall, who went on to direct hit films including Pretty Woman, tried unsuccessfully to recruit him for big-screen work.

I cant work in movies with Garry because Im so square that I wont be in a movie that has four-letter words in it, Mr. Molinaro said. That puts me pretty much totally out of films these days. . . . You get to a point where you dont want to do just anything for the career. You gotta live with yourself.

Oct 31st, 2015
RIP I liked him two didn't watch many sitcoms or for that matter comedy shows
This was one I liked sad day