Inventor of LSD dies at age 102 Albert Hofmann, discoverer of the mind-altering drug LSD and former head of the research department of Swiss chemical company Sandoz, is shown in 1998. He died Tuesday of a heart attack.

Albert Hofmann, the father of the mind-altering drug LSD whose medical discovery grew into a notorious illicit substance, died Tuesday. He was 102.

Hofmann died of a heart attack at his home in Basel, Switzerland, according to Rick Doblin, president of the Multidisciplinary Association for Psychedelic Studies, in a statement posted on the association's website.

His death was confirmed to the Associated Press by Doris Stuker, a clerk in the village of Burg im Leimental, where Hofmann moved following his retirement in 1971.

Hofmann's hallucinogen inspired  and arguably corrupted  millions in the 1960s psychedelic era. For decades after LSD was banned in the late 1960s, Hofmann defended his invention.

"I produced the substance as a medicine. It's not my fault if people abused it," he once said.

The Swiss chemist discovered lysergic acid diethylamide-25 in 1938 while studying the medicinal uses of a fungus found on wheat and other grains, at the Sandoz pharmaceuticals firm in Basel.

He became the first human guinea pig of the drug when a tiny amount of the substance seeped onto his finger during a repeat of the laboratory experiment on April 16, 1943.

Hofmann discovered the drug had a similar chemical structure to psychedelic mushrooms and herbs used in religious ceremonies by Mexican Indians.

Hofmann and his scientific colleagues hoped that LSD would make an important contribution to psychiatric research. The drug exaggerated inner problems and conflicts and thus it was hoped that it might be used to recognize and treat mental illnesses like schizophrenia.
LSD sold by Sandoz as medicine

For a time, Sandoz sold LSD 25 under the name Delysid, encouraging doctors to try it themselves. It was one of the strongest drugs in medicine  with just one gram enough to dose an estimated 10,000 to 20,000 people for 12 hours.

LSD was elevated to international fame in the late 1950s and 1960s thanks to Harvard professor Timothy Leary, who embraced the drug under the slogan "turn on, tune in, drop out." The film star Cary Grant and numerous rock musicians extolled its virtues in achieving true self discovery and enlightenment.

But aside from the psychedelic trips and flower children, horror stories emerged about people going on murder sprees or jumping out of windows while hallucinating. Heavy users suffered permanent psychological damage.

The United States government banned LSD in 1966 and other countries followed suit.

Hofmann maintained this was unfair, arguing that the drug was not addictive. He repeatedly maintained the ban should be lifted to allow LSD to be used in medical research.

He himself took the drug  purportedly on an occasional basis and out of scientific interest  for several decades.

"LSD can help open your eyes," he once said. "But there are other ways  meditation, dance, music, fasting."

Even so, the self-described "father" of LSD readily agreed that the drug was dangerous if in the wrong hands. This was reflected by the title of his 1979 book: LSD - my problem child.

Hofmann retired from Sandoz in 1971. He devoted his time to travel, writing and lectures  which often reflected his growing interest with philosophy and religious questions.

I salute him.... one of the greatest inventions of the 20th century, also one of the ones that needed the upmost respect and understanding.... or you're one screwed little puppy.

LSD should have been a medincinal of great use. Guess why it isn't?

Because the governments are fearful of losing control and oppression over society, just like they almost did in the 60's? That people might begin to figure out just how simple the universe actually is? That people might start to realize just how much ability the human structure, both physically and mentally, has. That telepathy isn't that far away in our evolution? That our forced introduction of "Reality" when growing up has killed off and closed certain potions of human imagination and connection with the world around us, where it should have been encouraged and trained, not ignored and oppressed?

I could go on.

But then again, the negatives there still exist, like idiots doing too much by themselves and not knowing what the hell they are doing, or just don't care.... that's usually what causes the most LSD related deaths around the world ~ Not being with other people who have experience to talk you down, or to bring you back to reality, etc..... you eventually start to get lost in your own thoughts and mind and then reality and fantasy can lose that thin line which already exists in normal time and mind, and before you know it, without a properly trained or strong mindset, you could just decide to stay on that "other side" forever and just skip the journey in between when you get sober again.

Then again what do I know?

Apr 30th, 2008
The majority of deaths I remember being attributed to LSD were due to misadventure, like drowning, freezing to death etc.

Apr 30th, 2008
Clinical research with LSD was showing great promise in more than the psycological area it was on the verge of widespread use as a medicinal, then "schedual one" and big pharma breathed a sigh of relief.

Apr 30th, 2008
And people wondered why there were so many tree hugging, naked nyphomaniacs back then? What else could we ask for?

Oh but being naked, not buying the newest fashions, not being interested in war and distruction, and living out in the woods doesn't go well for capitalism, greed and profit, so they had to make it illegal.

The 60's Hippies were on the right track, but they were the first to take that track and didn't have experience..... they probably figured their cultural message would be spread without the need of agression, but then the state decided to enforce their own action and agression and made pretty much everything they ever done illegal and then the 70's came around.... cocaine, disco and everything superficial and rotten that came with it.

Don't get me wrong, I still like things about the 70's, but you could easily see the cultural 180 shift from the 60's.


"Use more psychedelic drugs," is not advice you would expect from your GP, but that is the call from an influential UK medical journal to researchers.
An editorial in the Lancet says that the "demonisation of psychedelic drugs as a social evil" has stifled vital medical research that would lead to a better understanding of the brain and better treatments for conditions such as depression.
The journal's editor Richard Horton said he was not advocating recreational drug use, but championed the benefits of researchers studying the effects of drugs such as LSD and Ecstasy by using them themselves in the lab.
"The blanket ban on psychedelic drugs enforced in many countries continues to hinder safe and controlled investigation, in a medical environment, of their potential benefits," said the editorial, "...criminalisation of these agents has also led to an excessively cautious approach to further research into their therapeutic benefits."
Dr Horton told Guardian Unlimited that important advances were made by researchers using psychedelic drugs on themselves, but that these studies were stifled by the post-1960s anti-drug backlash. "Our very earliest understanding of the neurochemistry of the brain came from studying LSD-like compounds. Those same researchers were also taking those drugs, not recreationally, but as experiments on themselves. This was immensely important work." 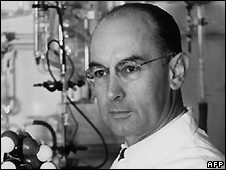 ^ From this link, there is a direct link to a video interview by Hofmann of his first experience with LSD. (Bottom of Page)

And speaking of Ecstasy, that too was originally a legal drug which was used for therapy, etc. for helping patients open up more and express clearer what was on their minds to their doctors..... eventually, that too got out onto the streets and made recreational like LSD.

I often wonder what might have been had I never opened that door, much of the understanding I gained seems more of a burden that a blessing, but then I have to think that living in total ignorance might not be very good either- not having the ability to make that choice again, I am happy with what I know and would NOT change it if I could

Oh and that salvia crap is friggin MADNESS, if you are curious about it just be warned it is something VERY similar yet entirely different that Psilocybin or LSD

Apr 30th, 2008
Used it a bit in my youth as well. Saw Steve Martin in The Jerk while on a trip and I never laughed so hard in my life. Others in the theater found the movie funny...but not that funny. I was falling out of my seat.