LeVar Burton has once again become a target of Twitter users confusing him for LaVar Ball.

The actor, who's best known for his roles of Geordi La Forge on "Star Trek: The Next Generation" and as the host of "Reading Rainbow," retweeted one of several angry messages he's received following Ball's interview with CNN on Monday night, in which he continued his feud with President Donald Trump. 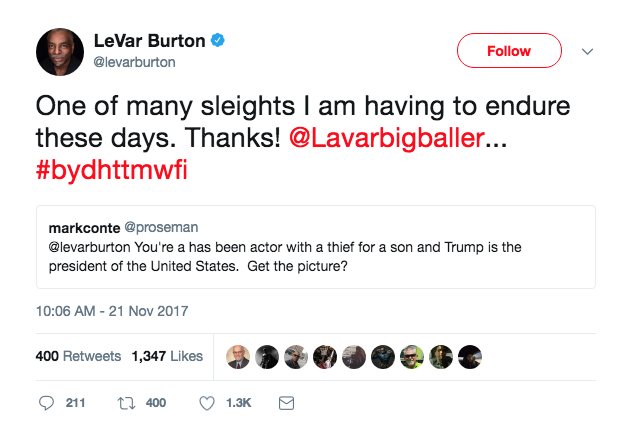 Oh well...the part about his acting wasn't far off, and Trump IS president of the US of A.

For a Trump supporter two out of three is a Grand Slam.

It's even worse ....confusing Lavar Burton with Lavar Ball

Is that the Lavern famous for living with Shirley and is Lavar any relation to Lucille ?

Is that the Lavern famous for living with Shirley and is Lavar any relation to Lucille ?

For a Trump supporter two out of three is a Grand Slam.

Yes and it leaves one for you too!

...so we will be generous and let this cancel out the "Russians did the rainbow sexual offence sulu thing" with bots...even though that was far worse in a vastly more horrendously dishonest way...

This guy made a mistake sure...

but the only people who don't make mistakes are the people who never did anything (honest)
like Hillary
Last edited by Danbones; Nov 22nd, 2017 at 01:46 PM..

Nov 22nd, 2017
Reminds me of when we went down to Panama and arrested Manuel Noriega. He was held in a Federal prison in Florida. So the Trumpchumps-to-be found a "Manuel Noriega" in the Miami phonebook. Poor Mr. Noriega had his phone ringing off the hook with hate calls from the rocket scientists who believed Federal prison detainees are listed in the Miami phonebook.

As I said, Trumpchumps to be.