Blackleaf
#1 Oct 10th, 2008
Geoff Hurst's shirt is to return to Wembley for the first time since 1966, when England won the World Cup there.

He wore the shirt in the 1966 World Cup Final, when England beat West Germany 4-2.

The shirt is insured for £1 million and is owned by property investor Andrew Leslau.

Geoff Hurst is the only man on the planet to have ever scored a hat-trick in a World Cup Final. 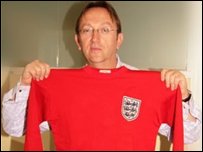 The England shirt Sir Geoff Hurst wore to win the 1966 football World Cup is to return to Wembley after it was bought by an Oxfordshire businessman.

Mr Leslau has insured the shirt for £1m and it will be on display for England's World Cup qualifier with Kazakhstan.

Will this ever happen again or was it a freak of nature?: England wore their red shirts when they won the World Cup in on that momentous July day in 1966

It was bought along with the shirt worn by England's Roger Hunt in the final.

"This is the most important shirt in English football history - not just the most valuable and most expensive in the world," said Mr Leslau.

"We know how much all the other shirts have sold for and the one prior to that was Pele's from the 1970 World Cup final, which was £157,000. Geoff Hurst's shirt is worth more than that.

"I will be proud to bring it back to Wembley.

"The stadium might have changed but the shirt is the ultimate reminder of the England team's most glorious day."

Mr Leslau said he was in talks with a number of parties interested in exhibiting it but it would return to Wembley on Saturday.

The shirts of West Germans Wolfgang Weber and Lothar Emmerich were also included in the purchase.

"It should not be hidden away in a bank vault somewhere," he said.

"We do think it is as valuable as a Damien Hirst but nonetheless we want it seen by football fans in an appropriate and fitting home."