Blackleaf
#1 Feb 10th, 2008
On February 6th, Manchester United commemorated the 50th anniversary of the Munich Air Disaster. On February 6th 1958, eight Manchester United players and 3 Manchester United members of staff died when their plane crashed on its third attempt to take off from a slush-covered runway at the Munich-Riem airport in Munich, West Germany. Manchester United - then known as the "Busby Babes" - were flying back from Yugosalvia, where they had played Red Star Belgrade in the European Cup. The game finished 3-3 though United won the tie 5-4 on aggregate. United reached the semi-finals, were they were eventually knocked-out by the eventual winners Real Madrid.

On Wednesday, thousands gathered at Old Trafford to commemorate the 50th anniversary.

Today was Manchester United's first match since the 50th anniversary, and it was against the same-city rivals Manchester City. A minute's silence was held before the game, with thousands of fans of both teams holding up their scarves as a mark of respect.

And, during the game, both teams wore 1950s-style kits as a mark of respect for those killed in the Munich disaster.

United lost the game. It is the second time that United have lost against City in the leagye this season, giving Manchester City their first league double over Manchester United since 1970 and their first win at Old Trafford since 1974.


First-half goals from Darius Vassell and new signing Benjani were enough to earn Manchester City victory over a strangely subdued United, despite a stoppage time consolation from Michael Carrick.

In front of a full house at Old Trafford the day was charged with emotion as tributes were made to those who lost their lives in the Munich air crash 50 years ago this week.

Third time lucky: Vassell took advantage of some sloppy United defending to open the scoring. Both teams wore 1950s-style kits as a mark of respect for the Munich victims


Fears that the minute silence might not be observed by all present proved unfounded as players and fans bowed their heads in reflection, though the sound of fireworks outside the ground could be heard.

Once the match started United dominated the early possession but other than a shout for a penalty when Cristiano Ronaldo tumbled in the box and a Ryan Giggs effort from a tight angle that the impressive Joe Hart turned over the crossbar they were unable to create any meaningful opportunities.

As the first-half progressed City, organised and disciplined at the back and breaking forward from a five man midfield when opportunity allowed, grew in confidence and it was no surprise when Vassell gave them the lead.

Martin Petrov broke down the left and fed Steven Ireland in the box but Edwin van der Sar came out to block his effort.

The rebound fell to Vassell who saw his first shot saved but made no mistake when handed a second strike with United slow to react to the danger.

United struggled all afternoon to defend corners and set pieces and, in the closing minutes of the half, paid the price. Petrov's initial cross was returned to him but he swung over another teasing ball that Benjani got the slightest of touches on to beat van der Sar at his far post.

A second-half response from United, who before today had conceded just three goals at home in the league this season, was expected but did not materialise and City ran out comfortable winners in the end, despite Carrick, a second-half substitute, curling his shot out of Hart's reach to pull one back with 90 seconds left on the clock.

The victory is City's first at Old Trafford since 1974 and gives them a first league double over their neighbours since the 1969-70 season and puts a major dent in United's title challenge whilst lifting City back in to sixth place. 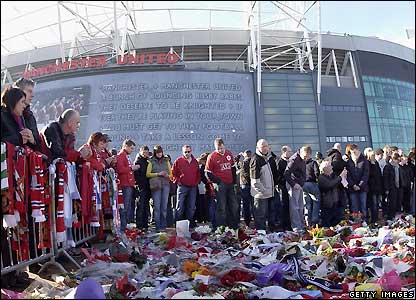 Man Utd 1-2 Man City: Before the match, fans leave tributes outside Old Trafford to remember those killed in Munich 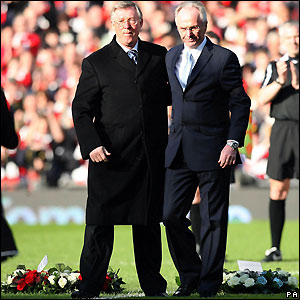 With the 50th anniversary of the air disaster having just past, the rival managers lay wreaths on behalf of their clubs 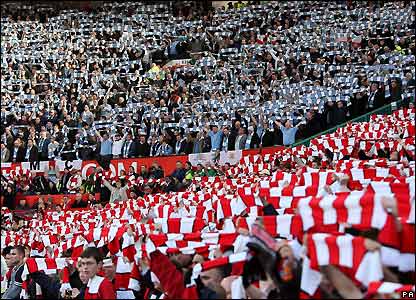 A minute's silence is then impeccably observed, however, several loud bangs appear to come from outside the stadium 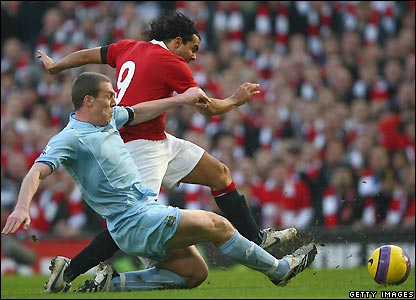 The game begins with the hosts enjoying the early possession and Richard Dunne has to be alert to keep out Carlos Tevez. Both teams are wearing 1950s-style kits as a mark of respect to the Munich victims 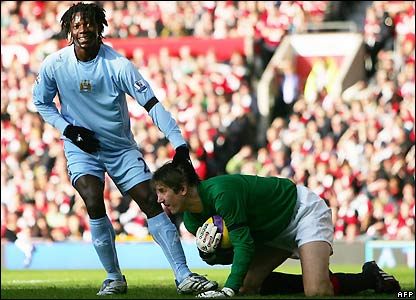 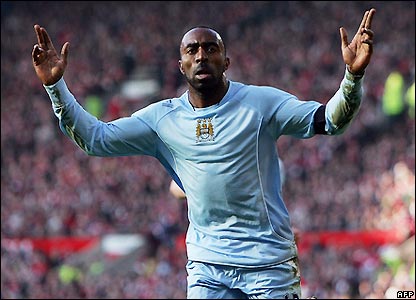 With their confidence growing, the visitors score when Darius Vassell nets after Edwin Van der Sar parries his first attempt 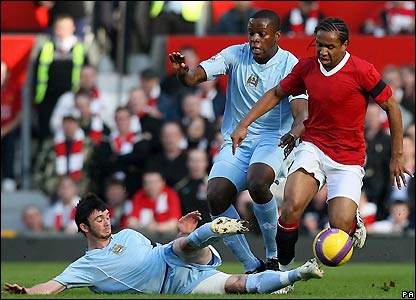 Anderson, in for Owen Hargreaves, looks to create something in response but some resolute defending keeps City in front 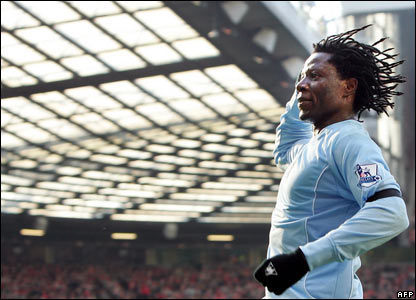 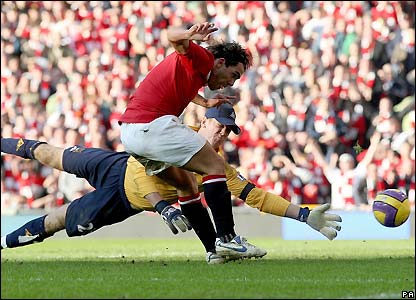 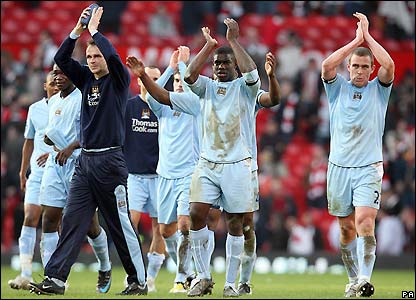