tay
#1 Aug 7th, 2017
The company's adverts showed a line-up of cartoon women in their underwear with the slogan "The whole city is looking for BREASTS".

It listed discounts for women depending on their cup size, with greater offers available to women with bigger busts.

One representative complaint said the posters were "vulgar advertising" and "discriminatory towards women".

The posters first appeared on 1 August and have since been removed, but Trendy Shrimp general manager Lan Shenggang defended their sales strategy. "Once the promotion started, customer numbers rose by about 20%," he said, adding that "some of the girls we met were very proud - they had nothing to hide".

He reassured readers that customers could claim their discounts from the waitresses rather than dealing with male staff, in order to "avoid embarrassment".


A woman with an A-cup bra could get 5% off her meal, but someone with a G cup could get a 65% discount. 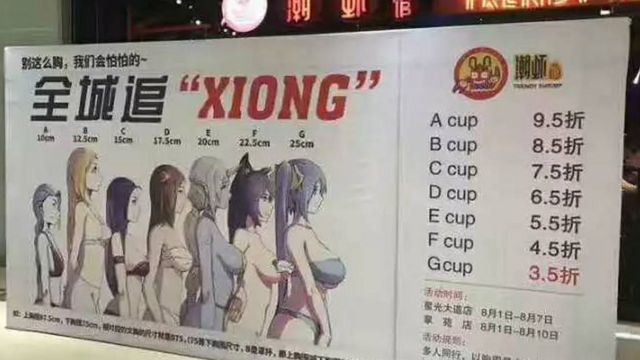 Even the Chinese hate their own cartoons.

Aug 8th, 2017
Nothing like giving small-breasted women an even bigger inferiority complex.

Nothing like giving small-breasted women an even bigger inferiority complex.

No telling how low Chinese will stoop for a buch

Nothing like giving small-breasted women an even bigger inferiority complex.

Stop being such a bleeding hart feminist.