Blackleaf
#1 May 6th, 2007
Unlike the United States, the shooting of policemen in Britain is so rare that its makes national news.

The shooting occured in Shrewsbury, Shropshire 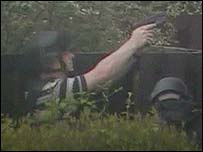 A policeman has been killed and another man found dead after officers were called to a property in Shropshire.

West Mercia Police said officers attended a domestic incident in New Park Road, in the Castlefields area of Shrewsbury, at 0610 BST on Sunday.

They were confronted by a man with a firearm and a constable was shot. He was pronounced dead in hospital.

A man in his 30s was found dead and a firearm recovered. No-one else is being sought by police following the deaths.

Chief Constable Paul West said: "Any death is a huge tragedy for all involved and on this occasion the death of a serving police officer has had a profound effect on everyone who works for West Mercia Constabulary.

"I would like to pay tribute to that officer's bravery and dedication in responding to that incident and also his colleagues up and down the country who do likewise."

He said he had met members of the dead officer's family and said they were "understandably devastated".

"It is important to remember that another man has died today. All of our thoughts are with all of the people involved in the incident."

Mr West appealed for any witnesses to get in touch with police.

It was reported that the man in his 30s and his girlfriend had been asked to leave a local pub in Shrewsbury on Saturday night after they had been arguing.

Neighbour Richard Duggan said he came out of his flat and was told to take shelter by police.

"I ran down the back alleyway and there was an adjoining alleyway and we saw more armed police officers turn up," he said.

"The police were in full control and they kept everybody back and after a short while an ambulance reversed up on to the path and we saw the shot police officer being lifted into the ambulance."

Tony Robinson, a newsagent's relief manager, said: "I looked out of the window and there were armed police swarming all over the place."

Mr Robinson said the road was a normal, suburban street, with a mix of terraced, semi-detached and detached homes. 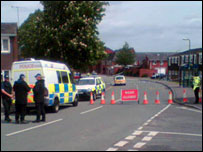 
Another resident who gave her name as Emma said: "I saw the police run out of North Park Road and they just said to everybody to stay in their house that there's a gunman on the loose.

"That's when a boy up the road said that there was a body bag brought out."

West Mercia Police Federation said it would be doing all it could in the coming months to support the dead officer's family and his colleagues.

Sgt Andy White, federation chairman, said: "Incidents of this nature are quite rare.

"Officers understand the risks they face every time they come on duty.

"This incident yet again underlines the risks that they face and the bravery they display in carrying out their duties." The Independent Police Complaints Commission (IPCC), which investigates shootings involving police officers, has been informed.