What Is Happening in Venezuela and Why It Matters 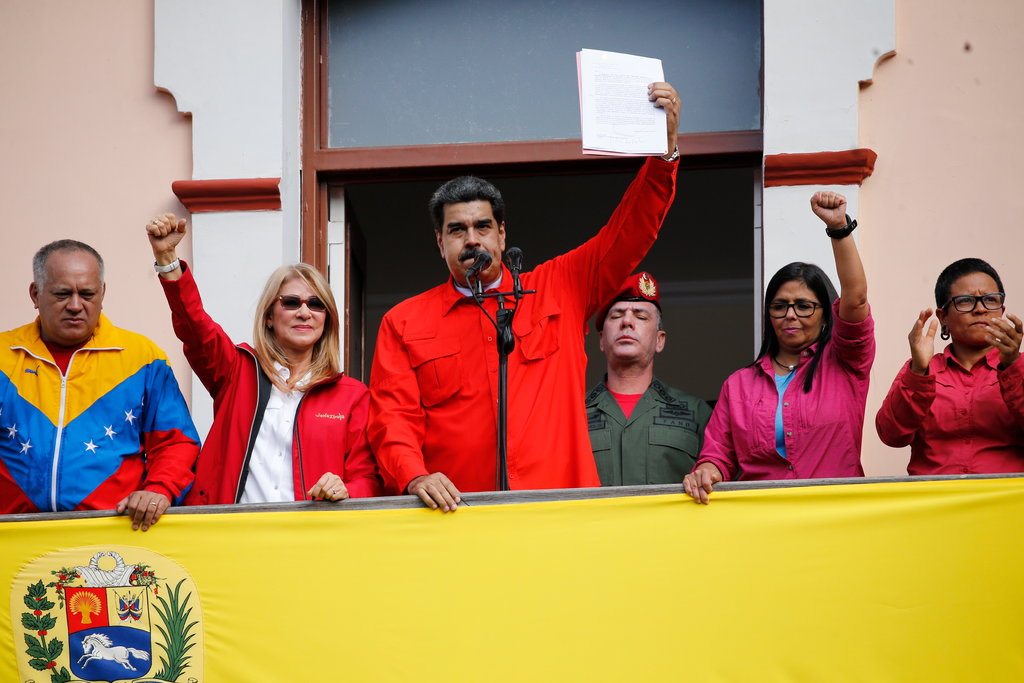 I don't understand why someone hasn't killed this bastard yet.. I mean seriously.
If not a citizen, how about state sponsored??
...
..
.

Jun 10th, 2019
9. Violence
The criteria for dissocial personality include a very low tolerance to frustration and a low threshold for discharge of aggression, including violence. The criteria for antisocial personality disorder include irritability and aggressiveness, as indicated by repeated physical fights or assaults. Philosophers can play a valuable role here in discerning the consequences of all of these findings for our attempts to build an ethical society. Several questions need addressing: What does the possibility that psychopathy is genetic say about human nature? What steps can we take to correct psychopaths, and which are the most ethical? If it is true that psychopaths have damaged or abnormal brains, can we hold them responsible for what they do? Are there degrees of psychopathy, so that normal people may possess psychopathic traits?
https://www.psychologytoday.com/ca/b...ing-psychopath

Jun 10th, 2019
1. Uncaring
The PCL describes psychopaths as being callous and showing a lack of empathy, traits the PPI describes as “coldheartedness.” The criteria for dissocial personality disorder (a related diagnosis) include a “callous unconcern for the feelings of others.” Several lines of evidence point to a biological grounding for the uncaring nature of the psychopath. For us, caring is a largely emotion-driven enterprise. Psychopaths have been found to have weak connections among the components of the brain’s emotional systems. These disconnects are responsible for the inability to feel emotions deeply. Psychopaths are also not good at detecting fear in the faces of other people (Blair et al., 2004). The emotion of disgust also plays an important role in our ethical sense. We find certain types of unethical actions disgusting; this works to keep us from engaging in them and makes us express disapproval of them. But psychopaths have extremely high thresholds for disgust, as measured by their reactions when shown disgusting photos of mutilated faces and when exposed to foul odors.
One promising new line of research is based on the recent discovery of a brain network responsible for understanding the minds of others. Called the default mode network (because it also performs other tasks and is operating most of the time when we are awake), it involves a cluster of several different areas in the brain’s cortex. The first studies have been done on the function of this network in psychopaths, and as expected, they have noted “aberrant functional connectivity” among its parts of the network, along with reduced volume in some of the network's crucial areas.
2. Shallow Emotions
Psychopaths and, to a degree, sociopaths, show a lack of emotion, especially social emotions such as shame, guilt, and embarrassment. Cleckley said that the psychopaths he came into contact with showed “general poverty in major affective reactions” and a “lack of remorse or shame.” The PCL describes psychopaths as “emotionally shallow” and showing a lack of guilt. Psychopaths are notorious for a lack of fear. When other people are put into an experimental situation in which they anticipate that something painful will happen, such as a mild electric shock or mildly aversive pressure applied to a limb, a brain network activates. Normal people will also show a clear skin conductance response, produced by sweat gland activity. In psychopathic subjects, however, this brain network shows no activity, and no skin conductance responses are emitted (Birbaumer et al., 2012).
3. Irresponsibility
According to Cleckley, psychopaths show unreliability, while the PCL mentions “irresponsibility,” and the PPI describes psychopaths as showing “blame externalization,” i.e. they blame others for things that are actually their fault. They may admit blame when forced into a corner, but these admissions are not accompanied by a sense of shame or remorse and have no power to change future behavior.
4. Insincere Speech
Ranging from what the PCL describes as “glibness” and “superficial charm,” to Cleckley’s “untruthfulness” and “insincerity,” to outright “pathological lying,” there is a trend toward devaluing speech itself among psychopaths by inflating and distorting it toward selfish ends. The criteria for APD include “conning others for personal profit or pleasure.” One concerned father of a young sociopathic woman said, “I can't understand the girl, no matter how hard I try. It's not that she seems bad or exactly that she means to do wrong. She can lie with the straightest face, and after she's found in the most outlandish lies she still seems perfectly easy in her own mind” (Cleckley, 1941, p. 47). This casual use of words may be attributable to what some researchers call a shallow sense of word meaning. Psychopaths do not show the differential brain response to emotional terms over neutral terms that other people do (Williamson et al., 1991). They also have trouble understanding metaphors and abstract words.
5. Overconfidence
The PCL describes sociopaths as possessing a “grandiose sense of self worth.” Cleckley speaks frequently of the boastfulness of his patients. Hare (1993) describes an imprisoned sociopath who believed he was a world-class swimmer.
6. Narrowing of Attention
According to Newman and his colleagues, the core deficit in psychopathy is a failure of what they call response modulation (Hiatt and Newman, 2006). When most of us engage in a task, we are able to alter our activity or modulate our responses, depending on relevant peripheral information that appears after the task has begun. Psychopaths are specifically deficient in this ability, and according to Newman, this explains their impulsivity, a trait which shows up in several of the lists of criteria, as well as their problems with passive avoidance and with processing emotions.
Top-down attention tends to be under voluntary control, whereas bottom-up attention happens involuntarily. But bottom-up attention can temporarily capture top-down attention, as when movement in the periphery of our visual field attracts our attention. Psychopaths have trouble using top-down attention to accommodate information that activates bottom-up attention during a task. In other people, this process tends to happen automatically. When a hunter is scanning for deer, a rabbit hopping into the periphery of his visual field automatically attracts his attention. Top-down attentional processes monitor the field of attention for conflicts and resolve them. The standard means of assessing this is the Stroop Task, in which a subject must read color words which are printed in ink of a conflicting color, such as “red” printed in blue ink. Several studies indicate that psychopaths actually perform better than other people on these tasks (Hiatt et al., 2004; Newman et al., 1997).
7. Selfishness
Cleckley spoke of his psychopaths showing “pathologic egocentricity [and incapacity for love],” which is affirmed in the PPI's inclusion of egocentricity among its criteria. The PCL also mentions a “parasitic lifestyle.”
8. Inability to Plan for the Future
Cleckley's psychopaths showed a “failure to follow any life plan.” According to the PCL, psychopaths have a “lack of realistic long-term goals,” while the PPI describes them as showing a “carefree nonplanness.”

Jun 10th, 2019
Yeah MegaButtFace thinks he is relevant, or that anyone cares about anything he posts.

Fildena CT 50 Mg contains the magical potion for erecting your penis if you have been running through the misery of erectile dysfunction (ED). Its active potion Sildenafil is a strong vasodilating agent which enhances the blood influx in the penis

Do you self identify as a dickless wonder.