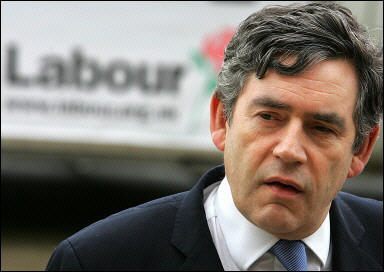 
Tony Blair surrendered on his own terms today as Gordon Brown ushered in a new radical era of change.

Ending a decade of relentless controversy, wars and even a police inquiry, Labour's longest-serving Prime Minister was set to stroll out of No 10 with his head held high.

It is also the day Mr Blair is expected to announce that he is turning his back on British politics for good to take up a job as special envoy to the Middle East.

He is poised to resign as an MP on the same day he steps down as Prime Minister - triggering a by-election in his constituency of Sedgefield, which could be held as early as July 19.

His decision to stand down after 24 years in Parliament will allow him to 'throw himself' into the role as the international community's key peacemaker in the Middle East, his close allies said.

Today at Downing Street, crowds of well-wishers, and protesters were gathering in Whitehall to watch, cheer or jeer his final progress from Downing Street to the Commons for his final Prime Minister's Questions.

Then Mr Blair was returning to No 10 to give an emotional speech of farewell and thanks to his staff and closest aides and, shortly after 1pm, was to drive to Buckingham Palace with Cherie to offer his resignation to the Queen.

He will quit as an MP for Sedgefield tonight, citing a new post as Middle East envoy as the reason, although his international role is expected to allow time for him to write his memoirs for around £5 million and join the lucrative US lecture circuit.

Mr Blair's early departure will mean an electrifying double-by-election, probably as early as 19 July in Sedgefield and Ealing Southall, the London seat vacated by the death of Piara Khabra.

It will be the first electoral test of the new political rivalry that will dominate Britain until the next election - Mr Brown versus David Cameron.

Mr Brown was up late into the night with his closest friends and advisers planning the launch of his new administration. He is expected to start with a bang - a sweeping reshuffle in which a businessman from outside politics will join the Government to symbolise his commitment to opening up Whitehall to "all the talents".

Up to seven Cabinet members will leave their jobs. Alistair Darling will replace Mr Brown as Chancellor, with Jack Straw tipped to be either Minister for Justice or Foreign Secretary.

In an olive branch to Blairites, John Hutton, the Work and Pensions Secretary once alleged to have said Mr Brown would be a "f*****g disastrous prime minister" is tipped to survive, and may replace Patricia Hewitt as Health Secretary. Scrum: The media gather outside Downing Street to capture Mr Blair's final journey as PM to the House of Commons


Whitehall will be reorganised, with the old Department of Trade at the centre of reforms designed to promote competition, energy efficiency and major construction projects.

Mr Brown plans to echo his earliest political coup of making the Bank of England independent by giving more freedom to bodies that promote business policy and technology.

A YouGov poll for Sky News put the Conservatives on 37 per cent to Labour's 36. It vindicated Mr Brown's decision to emphasise change, with some 45 per cent of those polled saying that being "heir to Blair" was a "bad thing". Mind the step: Gordon Brown's TV is moved in to No 10 
Mr Blair is the first prime minister to leave without being forced out by voters, their own party or illness in modern times. John Major, Margaret Thatcher and Sir Edward Heath were driven out while Harold Wilson retired due to ill- health.

An aide said Mr Blair was "having a very ordinary Wednesday morning, seeing people from 8am and then spending the morning prepping for Prime Minister's Questions. It will probably get a lot more emotional after that is over". In with the new: removal men carry the Blairs' possessions in to Connaught Square

But the appointment of Mr Blair, which will place one of the key architects of the Iraq war at the heart of Palestinian politics, provoked widespread fury in the Arab world yesterday.

The Prime Minister was labelled by hardliners as a 'terrorist' who would not be welcome in the West Bank or Gaza.

There were even doubts among some European diplomats of Mr Blair's ability to win public support on the 'Arab street' because of his leading role in Iraq and his close relationship with George Bush.

Barring last minute wrangling, Mr Blair's new job is expected to be confirmed by the Quartet of the U.S., UN, EU and Russia later today after two days of discussions in Jerusalem. After the announcement, Mr Blair will go to Sedgefield to speak to local party members.

His decision to put Westminster behind him will also give his successor Gordon Brown breathing space without him 'hanging around on the backbenches', one ally said.

But it contradicts an emotional statement Mr Blair made last month that he will remain as MP for Sedgefield until the next election in 2008 or 2009.

His decision to quit Parliament is a bruising snub for his constituents, who voted him in with a majority of more than 18,000 two years ago and have loyally backed him since he first stood for the safe Labour seat in 1983.

His agent John Burton said: "I think, if he gets the Middle East job, he will resign as an MP."

Mr Blair made clear his enthusiasm for the role at his final No 10 Press conference alongside Arnold Schwarzenegger, the Governor of California.

He said: "I think that anybody who cares about greater peace and stability in the world knows that a lasting and enduring resolution of the Israeli-Palestinian issue is essential.

"As I have said on many occasions, I would do whatever I could to help such a resolution come about."

As peace envoy, Mr Blair will take the lead on Palestinian economic and political reform, working closely with president Mahmoud Abbas. Mr Blair has demanded a beefedup role which will stretch beyond his predecessor, former World Bank president James Wolfensohn.

His personal envoy to the Middle East, Lord Levy - who is also leaving his post - last night claimed Mr Blair had earned 'great respect' throughout the Arab world including Egypt and Jordan.

Lord Levy told Radio 4's PM programme: "He will bring a zeal and a zest to this role."

But the reaction in the region was far from friendly. Hamas spokesman Dr Fawzi Barhoom said: "Tony Blair has acted as a terrorist in many Arab and Muslim states such as Iraq, Afghanistan and Somalia.

"He has caused the death of many thousands of innocent people and destroyed the infrastructure of their countries.

"Blair has his own black fingerprints in the history of the Palestinian people. He had supported the Zionist occupation's terrorism and massacres against our people."

Abu Mujahee, spokesman for the Palestinian hardline group the Popular Resistance Committees, said: "This man, Tony Blair, has been a big failure in his own country and he is totally empty of ideas or solutions.

"Yet now the international community want to export him to us?"

A senior U.S. official said the Quartet had agreed on a beefed-up special envoy position, which will deal primarily with helping the Palestinian Authority build political institutions.

The post is expected to be unpaid but will come with staff and logistical support from the Quartet - likely to be worth around £100,000.

George Bush, who pushed for Mr Blair to be nominated, will endorse the appointment at a speech at a mosque in Washington later today.

HOW BROWN'S FIRST CABINET MAY LOOK

Here are some of the jobs and who may get them -