Blackleaf
#1 May 3rd, 2006
A list of the world's greatest sh*tholes has been published - and is topped by Sudan. Iraq is in 4th place.

The LEAST vulnerable states in the world, those that came bottom of the list, were three Scandinavian nations - Finland, Sweden and Norway. 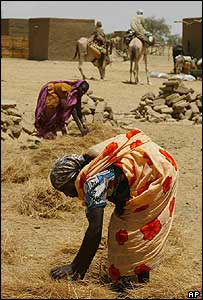 Beautiful Helsinki - Finland is third from bottom, just above Sweden and Norway. Finland is also the world's most democratic nation.

Pakistan and Afghanistan are among the world's top 10 most vulnerable states, according to a new study.

The report - compiled by the US Foreign Policy magazine and the US-based Fund for Peace think-tank - ranked 146 nations according to their viability.

Judged according to 12 criteria, including human flight and economic decline, states range from the most failed, Sudan, to the least, Norway.

The top 60 positions in the list were occupied almost exclusively by African, Middle Eastern, and Asian countries.

India was ranked 93rd, Bhutan came 39th and the Maldives were not mentioned.

The second annual "failed states index" was based on "tens of thousands of articles" from different sources gathered over several months in 2005 and reviewed by experts, its authors said.


Each nation was given an overall score based on the 12 criteria:

criminalisation and delegitimisation of the state

security apparatus as "state within a state"

intervention of other states or external actors

Pakistan moved from 34th last year to ninth in the new report - one of the sharpest changes in the overall score of any country on the list.

The contributing factors were Pakistan's inability to police the tribal areas near the Afghan border, the devastating earthquake last October in Kashmir and rising ethnic tensions, the report said.

Afghanistan, ranked 10th, faces different problems from Iraq, which despite the presence of US-led troops came fourth, the report said.

Educated exiled Afghans had been slow to go home following the ousting of the Taleban in 2001, but poor refugees had returned from Pakistan and Iran in large numbers, the study said.

"The result is a capital city busting at the seams but short of trained administrators."

The authors cite India as an example of a state which has pulled back from the brink, saying that in the 1970s analysts predicted dire consequences as a result of population growth, economic mismanagement, poverty and corruption.

Now, they say, India today has turned itself around and might have the edge over China (ranked 57) in the long run.

Pauline Baker, president of the Fund for Peace, told the Associated Press news agency that India had greater social mobility and was more decentralised than its more populous neighbour.

Zimbabwe, Chad, Somalia, Haiti and Pakistan and Afghanistan were also placed in the top 10 of the most failed states.

The top sixty positions in the list were occupied almost exclusively by African, Middle Eastern, and Asian countries.

The only European states in relatively high positions were Bosnia and Herzogovina (35), Russia (43), Belarus (50), Serbia and Montenegro (55) and Moldova (58 ).

May 3rd, 2006
Sudan is hopeless and should remain off of our radar. Any effort there is a waste for any nation to become involved in.

May 3rd, 2006
Blackleaf, I hope in your next life you live in a "shithole" and the official language is French.

RE: Sudan tops the failed

May 3rd, 2006
The United States is the failed state we have to worry about though.

however scary the US can be---its not without hope

they make a fine poodle though

RE: Sudan tops the failed

May 3rd, 2006
I keep forgetting about UK, thier such a tiny little toady statette, imagine licking Americans for a living, christ when you hit the bottom it's pitiful.

Blackleaf, I hope in your next life you live in a "shithole" and the official language is French.

thankx for the laugh.