Blackleaf
#1 May 25th, 2017
On an emotional night at the Friends Arena in Stockholm, Manchester United last night beat Amsterdam giants Ajax to win the Europa League for the first time.

Manchester United dedicated their victory to the victims of Monday's terror attack in the city at an Ariana Grande concert which has so far left 22 people, including an eight year old girl, dead.

Paul Pogba's deflected shot put them ahead in the 18th minute and Henrikh Mkhitaryan's sixth Europa League goal of the campaign, flicked in from Chris Smalling's header at a corner, confirmed they would add to the EFL Cup won against Southampton earlier this season.

Wayne Rooney made a brief appearance as a substitute with a minute left and the game won, being handed the captain's armband by Antonio Valencia on what could well be his farewell appearance for United.

And as the final whistle sounded and United's celebrations began, chants of "Manchester" rang around the Friends Arena in tribute to those who died and were injured in the attack which cast a shadow over this showpiece occasion. Manchester United claimed their second major trophy of the season and secured Champions League football as they overcame Ajax to win the Europa League final in Stockholm.

On an emotional night following the attack which killed 22 people at Ariana Grande's concert at the Manchester Arena on Monday, United's fans were allowed a measure of celebration as Jose Mourinho's side won in comfort.

Paul Pogba's deflected shot put them ahead in the 18th minute and Henrikh Mkhitaryan's sixth Europa League goal of the campaign, flicked in from Chris Smalling's header at a corner, confirmed they would add to the EFL Cup won against Southampton earlier this season.

Wayne Rooney made a brief appearance as a substitute with a minute left and the game won, being handed the captain's armband by Antonio Valencia on what could well be his farewell appearance for United.

And as the final whistle sounded and United's celebrations began, chants of "Manchester" rang around the Friends Arena in tribute to those who died and were injured in the attack which cast a shadow over this showpiece occasion.

Mourinho - who has so often looked so unhappy this season - ran on to the field to celebrate with his players and was thrown in the air by his coaching staff and hugged by his son.

It means United are now the fifth team to claim the full quota of European trophies, joining an illustrious list with Ajax, Chelsea, Juventus and Bayern Munich.

Mourinho back in the old routine 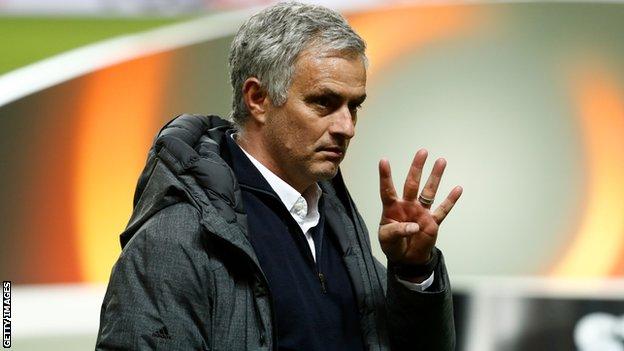 Mourinho has had his moments of frustration this season - especially with 15 Premier League draws that led to an unsatisfactory sixth-place finish.

It left United's Champions League hopes resting on this game but the win and subsequent qualification for the group stages of Europe's elite tournament means that Mourinho can regard this season as a real success.

Some may question the quality of United's performances and this undoubtedly remains a work in progress but two trophies and that place back in the Champions League is an impressive outcome, irrespective of the style in which it was achieved.

It was also a European final won without key defender Eric Bailly, who was suspended, and 28-goal leading scorer Zlatan Ibrahimovic, who sustained a serious knee injury in the quarter-final win against Anderlecht at Old Trafford.

Tottenham's Mauricio Pochettino and Liverpool's Jurgen Klopp have received much praise for their work this season and getting into next season's Champions League - Mourinho has done that and added the actual tangible reward of two pieces of silverware on top.

Mourinho's mood has often been dark this season but he still has that habit of dealing in his favourite currency, namely trophies.

And the result means United can, finally, regard their season as a successful one as a night which started with a mixture of silence then applause for those who died in Monday's attack and ended with Wayne Rooney lifting the Europa League trophy on what is very likely to be his final appearance for the club. 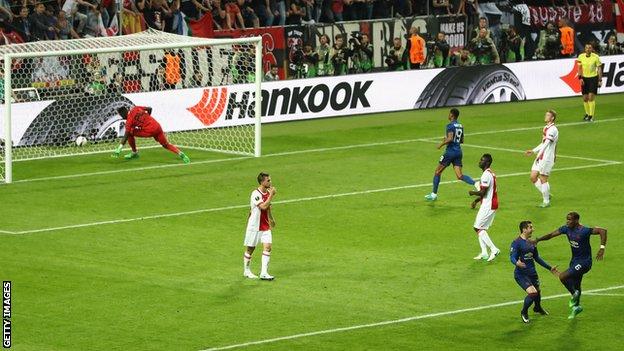 Paul Pogba scored his ninth goal of the season

Pogba has struggled to justify the world-record transfer fee of £89m paid to Juventus last summer but this was a stage on which he showed flashes of the qualities that persuaded Mourinho to make him such a high-priority signing.

Like this United side, there is still much to do before he can be regarded as the finished article but the manner in which he made sure early midfield dominance was secured was impressive and he added a goal for good measure.

It may end up being classed as an own goal but Pogba will happily accept it, trying his luck from 20 yards after being afforded just a little too much space by Ajax captain Davy Klaassen and helped by a huge deflection off Davinson Sanchez. And perhaps he was due that touch of good fortune after being thwarted by the woodwork so often this season.

And it was another profitable night for another big-money Mourinho buy, Mkhitaryan. The Armenian struggled in the first half but showed what a priceless poacher's instinct he has, swooping from close range for another Europa League goal. Ajax coach Peter Bosz said it would be understandable for his young side to feel nervous - and his fears were confirmed as they were never able to show off the full extent of their glittering promise.

Six of the starting line-up were 21 or under in the youngest 11 to start a major European final, with an average age of 22 years and 280 days. In defender Matthijs de Ligt, they had the youngest player to feature in one at 17 years and 285 days.

"It was a boring game. There were no chances from both sides," Bosz said after the final whistle.

"I'm disappointed because you play finals to win them. We didn't. I haven't seen the Ajax that I'm used to."

This was a night of disappointment for this great, historic old club but they are staying true to their finest traditions by producing outstanding young talent and showing a commitment to attacking football.

Ajax have established the foundations for more success.

"For all the players, this is the first final," he added.

"They will learn a lot from it and we will become stronger, and if we can keep this squad together we will be stronger next season, for sure." 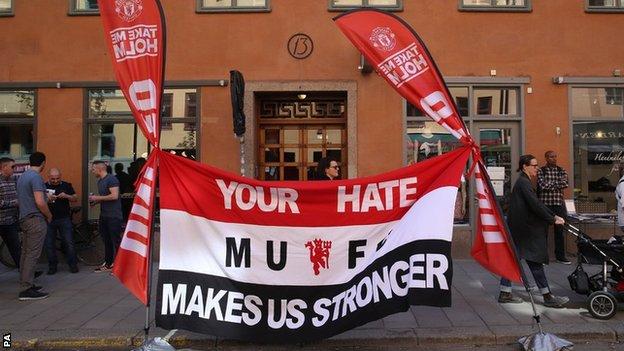 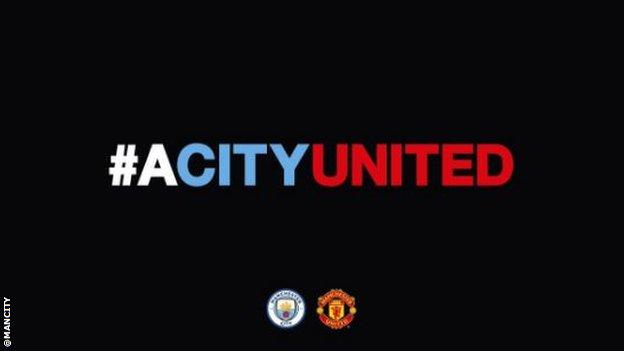 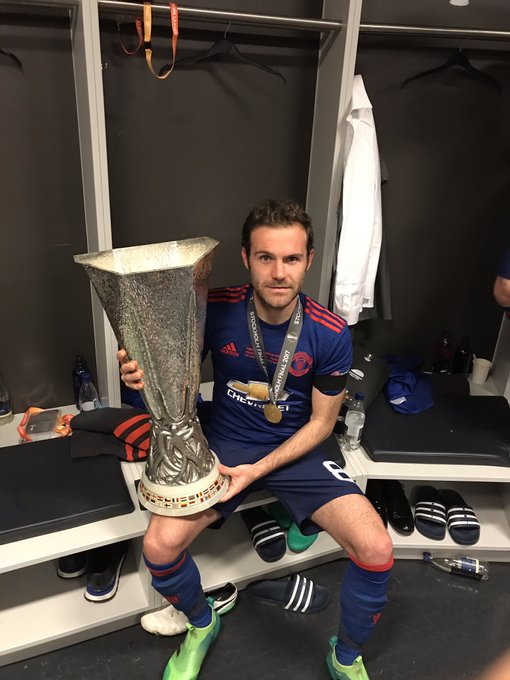 This trophy is for you, #MANCHESTER.

Paul Pogba scored in back-to-back games for United after a run of 19 games without one. It was the first time he had done so at club level since April 2016 for Juventus.

Mourinho has maintained his 100% win record against Ajax, winning all seven matches against the Dutch side.

Late substitute Wayne Rooney made his fourth appearance in a major European final for Manchester United (also the 2008, 2009 and 2011 Champions League finals), equalling the record held by Ryan Giggs.

United did not lose a single game this season in which they scored first (W37 D8 ).

Marcus Rashford became the youngest Englishman - aged 19 years and 205 days - to start a major European final since Gary Mills in May 1980 for Nottingham Forest, who was aged 18 years and 198 days when he played against Hamburg.