The last thing the left needs is the third iteration of a failed political dynasty.

Like tribesmen laying out a sacrifice to placate King Kong, news outlets continue to make offerings to the Clinton gods.

In The New York Times alone, Chelsea has starred in multiple features over the past few months: for her tweeting (its become feisty), for her upcoming book (to be titled She Persisted), and her reading habits (she says she has an embarrassingly large collection of books on her Kindle). With Chelseas 2015 book, Its Your World, now out in paperback, the puff pieces in other outletsElle, People etc.are too numerous to count.

One wishes to calm these publications: You can stop this now. Havent you heard that the great Kong is no more? Nevertheless, theyve persisted. At great cost: increased Chelsea exposure is tied closely to political despair and, in especially intense cases, the bulk purchasing of MAGA hats. So lets review: How did Chelsea become such a threat?

Perhaps the best way to start is by revisiting some of Chelseas major post-2008 forays into the public eye. Starting in 2012, she began to allow glossy magazines to profile her, and she picked up speed in the years that followed. The results were all friendly in aim, and yet the picture that kept emerging from the growing pile of Chelsea quotations was that of a person accustomed to courtiers nodding their heads

Please, God, Stop Chelsea Clinton from Whatever She Is Doing | Vanity Fair 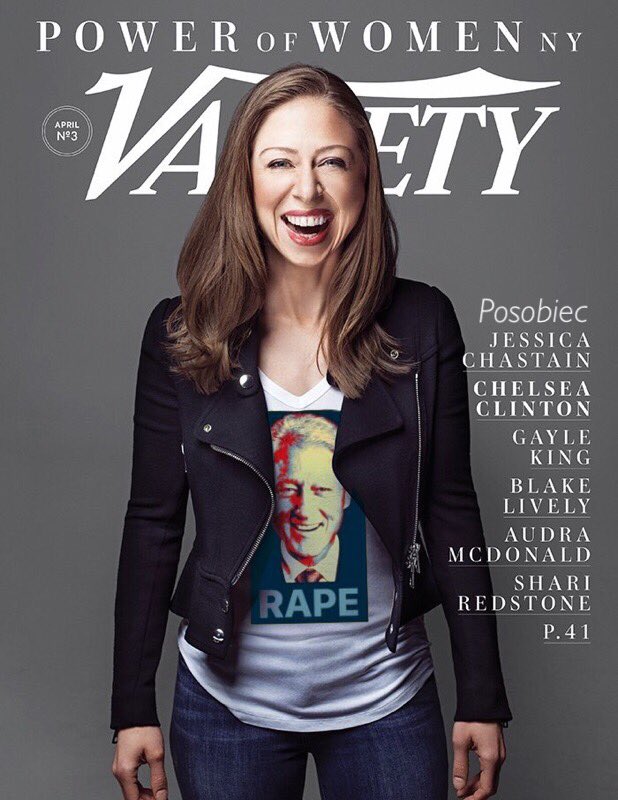 anyone notice her penis thumbs?

anyone notice her penis thumbs?

yuck. when was that?

yuck. when was that?

Typing to fast.. dealing with Ryder.. buying a truck - not paying attention to my spelling.

Well no, female and walking on 2 legs..

What you think I have your taste..

Well no, female and walking on 2 legs..

Musta been a pongo.

Apr 22nd, 2017
A candidate for Mercy Euthanization. Stop it before it spreads.

May 7th, 2017
Chelsea Clinton, a person who will definitely not run for office, has come out on Twitter urging people to give out money in proportion to your purse. But does vastly wealthy Chelsea live up to her own expectations?

On May 4, often known as Star Wars Day, the daughter of failed presidential candidate Hillary Clinton tweeted out a picture of George Washington captioned: America, Im your father  in reference to a famous Star Wars movie line.

Good day to remember Washington: Let your heart feel the afflictions & distress of everyone & let your hand give in proportion to your purse, she tweeted, quoting a popular Washington saying.

Good day to remember Washington: Let your heart feel the afflictions & distress of everyone & let your hand give in proportion to your purse https:// twitter.com/mountvernon/st atus/860101212808589312

Her tweet unleashed a barrage of replies pointing out the obvious hypocrisy of telling others to give money away when Chelsea herself isnt known for donating cash herself.

Social media users quickly reminded her how she apparently used dough from the Clinton Foundation to pay for her wedding, living expenses and taxes on gifts of cash from her parents, as the NY Post reported .

Wait. Your wedding cost $3M and was paid by the Clinton Foundation  how appropriate, one person tweeted, seconded by another saying with money that was collected for the Haitian people.

Clintons philanthropy mostly includes using her familys foundation to donate to progressive causes and other projects across the world. But the foundation isnt spending the fortunes of the Clinton family  rather, it is ploughing through donors and foreign governments money.

May 8th, 2017
She is proud of what here dad stands for Why not? She is just being realistic! Bill and the words illicit sex and rape are synonymous!