razorgrade
#1 Oct 1st, 2007
The Etobicoke Kangaroos will play the Toronto Eagles in Saturday's OAFL Grand Final after the Eagles defeated the Broadview Hawks in a tough Preliminary Final by 4 goals.

The 2 clubs are the OAFL's top teams both having 13-1 regular season results and spilting their 2 games between them evenly 1-1.

The Etobicoke Kangaroos are looking for their first championship and are 0-1 in Grand Finals since coming into the league in 2003 while the Toronto Eagles have won 10 OAFL Premeirships since the league inception in 1989. 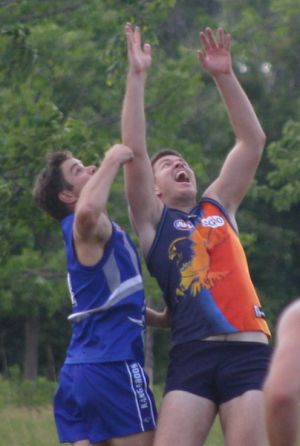 The Toronto Eagles have 8 Northwind (Team Canada) representatives from the squad that defeated the USA in their side, so the game will be a great showcase of local footy talent.

A great game is assured with the OAFL Premiership on the line.

If you haven't seen Aussie Rules before, then this is your perfect opportunity to support your team and "see the big men fly".

Oct 14th, 2007
Congratulations to the Toronto Eagles, who defeated the Kangaroos 82 to 24 to take their 11th Conacher Cup !