After almost 24 hours of bobbing up and down in their seats for votes on the government’s budget bill, there’s no doubt Conservatives MPs are tired.

But government members and cabinet ministers are also expressing private concerns they’ll come out of the showdown over Bill C-38 having exhausted some of their political capital as well.

M Ps are hearing complaints from Tory voters in their ridings about the government’s bundling several measures into a budget bill that have nothing directly to do with the nation’s finances.

Those complaints may start anew in a few months.

Conservative budget bills have been creeping up in size and scope since Stephen Harper’s party took office in 2006, so if past trends are any indication, the fall bill could be even bigger than the one that’s been the subject of a marathon debate on the Commons this week.

Pushback from within the Conservative caucus over Bill C-38 could pop the Prime Minister’s penchant for knitting together disparate pieces of legislation using the single thread that it’s all needed for the current economy.

The Jobs, Growth and Long Term Prosperity Act clocks in at more than 400 pages and changes nearly four dozen laws ranging from rules for charities to oversight of Canada’s spy agency.

Major opposition has come to changes being made to environmental assessments, Old Age Security, Employment Insurance and fisheries regulation and it hasn’t just flown from the political opposition to Mr. Harper but from within his ranks.

Both Mulroney-era Conservatives and a recent Tory cabinet minister lashed out at changes being made on the environment front. Meanwhile, grassroots Conservatives at the riding association level have written letters expressing their own scorn.

A single crack in the Conservative caucus could quickly become a schism, University of British Columbia political scientis Max Cameron said, and the environmental changes in the budget could be the chisel.

“I cannot believe that of the 39 per cent of Canadians who voted for the Conservatives, there aren’t a lot of them who care about the environment and they’ve got to be wondering,” Prof. Cameron said.

“If you start to see the base itself divide, does that bring pressure on members in the caucus and could you imagine a caucus revolt?

“... It’s pretty dramatic stuff and that’s the problem. The current leadership is not prepared to provide the space within which these things can be negotiated.”

That became obvious when current Tory MP David Wilks expressed his own concerns recently about how the bill was put together.

In excerpts of a recent meeting with his B.C. constituents posted on YouTube, Mr. Wilks addressed the extent to which backbenchers have a say in government policy.

“It certainly concerns some of us backbenchers. The decisions are made predominantly by cabinet and then they come back to us informing us how this is going to move forward,” he said. “But at the end of the day, in my opinion, they have made up their mind.”

But the Prime Minister is known for not having a completely tin ear and paying attention when his caucus tells him there is an issue percolating at the grassroots level that needs to be handled.

A flare-up in caucus over the government’s online surveillance bill saw that piece of legislation shoved right to the back burner.

The question for the party is whether the furor over Bill C-38 is a flash in the pan created by the drama of the voting showdown or the start of a narrative that won’t have a happy ending for the Tories.

“The danger isn’t that the opposition is going to bring you down, because you’re a majority government. They can’t do that,” Prof. Cameron said.

“But what could happen is you shoot yourself in the foot. You make dumb mistakes, you govern badly, you do things that alienate even your own rank and file, you create a mood in the country that’s just against you.”

Some Conservative insiders say what anger there is will blow out faster than candles on a birthday cake.

Veteran strategist Geoff Norquay noted that the Liberals tried to run their 2011 election campaign on issues relating to governance. “That did not work out well for the Liberals,” he said.

“A year later we are back to the same issue: the government is talking about the economy and the opposition is back to process, not substance.”

But another points out that in political circles it was former NDP leader Jack Layton’s process-oriented jab at then-Liberal leader Michael Ignatieff for not showing up for votes that’s partially credited with turning the tide orange in that campaign.

“Conservatives get accused of ‘playing to their base’ all the time, and to me that’s all this is, only from the opposite side, trying to solidify a wide but shallow support base,” the strategist said.

“For the NDP, this is mostly about establishing more bona fides as a party that will stand against the government.”

Senior Conservative Party leaders will be keeping a close ear to the ground on the summer BBQ circuit, testing the waters to see to what extent they may need to scale back omnibus tactics.

That can’t come soon enough for some political scientists.

“It reduces the House of Commons to making noises and rubber stamping,” Queen’s University professor Ned Franks said of the growing use of omnibus budget implementation bills.

“I consider these bills and the form they come to Parliament and the length of them an affront to parliamentary procedure and practice,” he added.

Jun 15th, 2012
I don't know about capital but it sure burned a lot of political credibility

The opposition keep hammering the fact that Harper has been hypocritical on this and it's getting a lot of exposure. 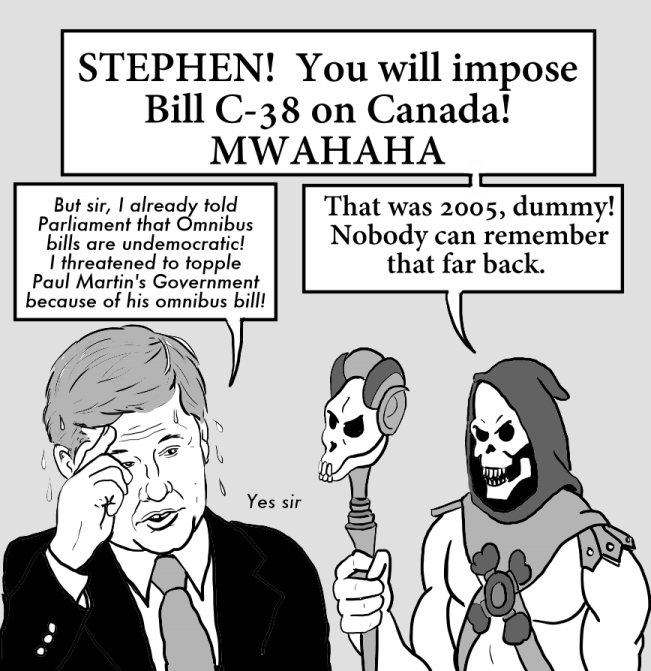 Jun 15th, 2012
Most people don't really give a crap about it. Its getting exposure but will be forgotten next month.

Most people don't really give a crap about it. Its getting exposure but will be forgotten next month.

I'm sure you would like to think those things are forgotten.

Most people don't really give a crap about it. Its getting exposure but will be forgotten next month.

MOST people? I assume you have stats?

I'm sure you would like to think those things are forgotten.

Other than your posts here, I hear nothing about it. Nobody is talking about it. Its yesterday's news. What will decide the next election will happen on the campain trail. Its the way it has been for the last 10 years at least. People generally have short memories (unless of course they have a specific agenda -- those tend to remember stuff longer).

There are new headlines on both those issues and you can guarantee people will be talking about the effects of this budget even after the next election.

There are new headlines on both those issues and you can guarantee people will be talking about the effects of this budget even after the next election.

Jun 15th, 2012
And of course the left, even with a majority would never make changes, even a little at a time to stay under the radar, Ya sure

Jun 15th, 2012
That's the sort of wisdom I'd expect from my wife on one of her bitchy days. Left - right has nothing to do with spoiled brat agenda.

You really have no idea about how colossal this budget is, do you?

I remember them slashing StatsCan last time and them slashing Women's rights during their first minority government. I remember them campaigning on accountability in response to the sponsorship scandal and then doing everything they could to govern behind closed doors. I remember them pushing through crime bill after crime bill despite the majority of witnesses telling them it was a bad idea. The senate reform got through though, I liked that.

The only thing that the conservatives could do to get me to vote for them again would be to campaign on electoral reform or to get back to their small government roots and start eliminating legislation as opposed to making new legislation.

In regards to the current budget bill, they could have had a small budget bill and another humongous bill entitled: An act to shuffle powers to different cabinet ministers. Followed by a smaller bill to make the various other changes unrelated to the normal shuffling of power.